Unfriended is the kind of movie that I already can’t wait to watch again in ten years. Better yet–I’d love to watch teenagers ten years from now watch it and see if it makes any sense to them. This is to say, Unfriended is a movie that is violently in the moment, a unique and sociological gold mine of a film, even though it is certainly not the first teen horror movie, the first to take place on a computer screen, or the scariest around.

The action in Unfriended occurs in real time on the desktop of a girl named Blaire (Shelley Hennig, “Ouija”), on the one year anniversary of her friend Laura’s (Heather Sossaman, “Desecrated”) suicide. In fact, Unfriended begins with Blaire watching a video of Laura shooting herself on school grounds on a website that hosts videos of that nature after clicking past a content warning. Blaire then watches a YouTube video titled “LAURA BARNS KILL URSELF,” the original uploading of which was apparently the catalyst for Laura’s death.

Cyberbullying and associated self harm are, fortunately and unfortunately, extremely topical issues these days. As unfortunate as it is that they are so common (especially, of course, for teens), it is fortunate that they are beginning to get the media and pop culture exposure that will hopefully help combat them. Cyberbullying is always complicated — it is frequently unclear who originally created and/or posted harmful content, as well as whether or not they were “just kidding” about it. In Unfriended, the ghost of Laura comes back, intercepting a Skype call between Blaire, her boyfriend Mitch (Moses Jacob Storm, “Sketchy” TV series), and their mutual friends Jess (Renee Olstead, “The Secret Life of the American Teenager” TV series), Adam (Will Peltz, “Men, Women & Children”), Ken (Jacob Wysocki, “Pitch Perfect”), and Val (Courtney Halverson, “The Hammer”). Throughout the rest of the movie, Laura forces the friends who filmed and posted the video to admit to doing so, along with other treacherous secrets they have been hiding from each other, all while carrying out her creative, violent, and deadly revenge.

Taking place on Blaire’s computer screen isn’t just a gimmick in Unfriended either. Rather, it’s a fully realized setting. Blaire’s Spotify is filled with believable saved music and playlists, her search history includes Forever 21 jewelry pages, and a SongMeanings.com page for Johnny Cash lyrics is open in her browser. (A paused episode of “Teen Wolf” is visible in another tab; a fun meta-joke considering that Hennig is on the cast of that show as well.) While Blaire Skypes with everyone, she also frequently privately messages Mitch, checks her email, and Facebook messages the Laura cyberghost, further establishing the movie as being from her perspective. Blaire’s early conversation with Mitch about wanting to consummate their relationship on prom night also implies her status as the “final girl” of the film. The only other thing I’m going to say about that is that by the end of Unfriended, the scary movie rules as outlined in “Scream” (i.e., if you drink, do drugs, or have sex, you die) are followed to a tee. Hennig is also by far the best actor in the movie (especially during her frantic Chat Roulette scene), which, as the first time I’ve seen her act since “Ouija,” was really refreshing.

Now for the bad news. Even though Blaire is the only character in the film who remains stationary (she literally sits on her bed the entire time), her computer is neither plugged in nor does its charge deteriorate as it would in real life. She also shares her screen with her Skype-mates at one point and immediately afterwards iMessages Mitch something they aren’t supposed to see without actually un-sharing the screen. While there are definitely messed up websites that would host the Laura Barns suicide video, the YouTube “LAURA BARNS KILL URSELF” video has just around 70,000 views a whole year after she has died. In real life, that video would both probably have had more views due to the media circus that would have resulted from it and would have been long ago removed and traced back to its poster by the site’s administrators and the police. It is also confusing that the creepy Skype account that terrorizes the group, which Blaire identifies as having been Laura’s, includes the name “billie,” rather than Laura’s own name or some other word or phrase that isn’t a name itself. Another aspect of the movie that was equal parts cool and ineffective was its pacing. While most teen horror films open with silly sexy fun before launching into continual, drawn out bloodfests, Unfriended instead jumps into the scary stuff rather quickly, then has a few minutes of nothingness followed by one jump scare, rinse and repeat, all the way until it ends. Especially considering the fact that most of these scares have been spoiled by the trailers (which, appropriately, have been all over YouTube the past few weeks), this makes this movie fun to watch unfold, but not actually frightening.

Also, while I understand that not every movie actually has to have a message (e.g., “It Follows” is chock full of teen sex but doesn’t actually say anything about it), Unfriended really sets itself up to be about the dangers of cyberbullying. Going into it, I expected it to be a film like “Carrie,” in that the teens being terrorized deserve some retribution, and as a viewer you sympathize with the person delivering it, but you still find the punishments she has chosen to be way too extreme. Instead, the Laura ghost uses the format of the popular drinking game “Never Have I Ever” to make each of the friends admit to having done horrible things to each other — from roofying a girl, cheating on a significant other, and coercing someone into having an abortion to selling a friend out to the cops for dealing drugs — that have absolutely nothing to do with what they did to Laura who, incidentally, they unanimously agree was not all that great of a person herself. So, rather than being about a victim of bullying who gets revenge on the people who ruined her life, it’s about a bad person who points out how bad all the people she knew when she was alive are, and kills them.

All of that being said, it was really interesting to see something we pretty much all interact with on a daily basis, our computers and the actual kinds of searches and programs we use on them, be used to exact the aforementioned revenge. That’s always the best kind of horror — not a fantastical monster attacking people who have put themselves in a stupid situation in the first place, but people who do the things we do finding themselves and their dirty little secrets falling victim to something truly terrible. This is especially true of the extreme suspense that one feels in the scene where Blaire is trying to empty her recycling bin — a very familiar process, one finds themselves rooting for it more fervently than they ever have. All in all, Unfriended probably has better merit as a time capsule than a horror film in its own right, but I’d be lying if I said it wasn’t fun. 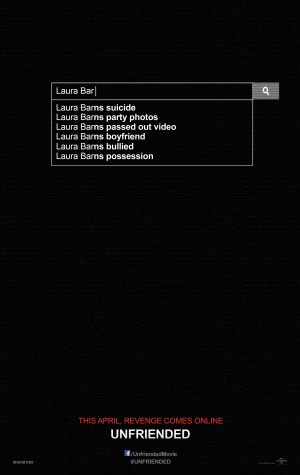