The second film from “The Myth of the American Sleepover” writer/director David Robert Mitchell, It Follows is the deservedly most anticipated horror flick of this spring. Teeming with eerie, ethereal synth music, dark psycho-sexual themes, and references to 1980s horror classics amid a dreary, timeless Detroit landscape, It Follows is a refreshingly subtle, practically gore-less film that at first appears to be a sort of combination of last year’s terrifying “Under the Skin” and the graphic novel “Black Hole” by Charles Burns. By its end, however, the themes that make the film stand out in the first place don’t seem to come with any specific message attached, which is disappointing, and it suffers from the same obvious potholes regarding parents and police that so many of its compatriots fall victim to as well.

At the heart of It Follows is Jay (Maika Monroe, “The Guest”), a teenager who has recently started seeing twenty-one year old Hugh (Jake Weary, “Zombeavers”). Early on in the film we see Jay quite literally abandon more childish activities, like floating in her small above ground pool or watching a movie with her sister, in order to go out with this older boy instead.

After a few dates, Jay and Hugh end up getting hot and heavy in the back of his car. Post coitus, Jay lounges in the back seat while Hugh rummages through the trunk, pontificating about what she’d thought growing up and dating boys and riding around in cars with her friends would have been like when she was only a child. She didn’t imagine really going anywhere, she explains, just being free. Just as she is wondering aloud about how, now that they are old enough to have the freedom, she does not know where to go, Hugh attacks her from behind with what appears to be chloroform, knocking her out.

When Jay wakes, wearing lacy pink undergarments and tied to a wheelchair, Hugh explains that there is something he passed on to her in the car; a thing that is going to follow her, walking slowly but never stopping, and that the only way she can hope to get rid of it is to pass it on to other people, too.

It is easy to interpret all of that initial imagery as a commentary on teenage sexuality, especially that of girls. The fact that Hugh still attacks Jay even after they have consensual sex to tell her that something he had given her by means of the act itself is going to start following her can be seen as analogous to sexual double standards. The concept of the following, shape-shifting presence that, Hugh warns her, might even take on the appearance of people she loves, can be seen as representative of the way that such sexual encounters can impact one’s relationships and reputation, even (or, in some cases, especially) if those encounters were consensual to begin with. Jay is even seen giving a statement to a less than cuddly police officer and becoming the talk of the neighborhood after Hugh unceremoniously deposits her, still undressed, in the middle of the street outside her home.

Our introductions to many of the other characters are marked by distinctly sexual coming of age themes as well. Jay’s younger sister Kelly (Lili Sepe, “Spork”), for example, clearly desires their neighbor, Greg (Daniel Zovatto, “Laggies”), though she has not yet acted on her feelings. Similarly, Kelly’s friend Paul (Keir Gilchrist, “It’s Kind of a Funny Story”), is clearly very interested in Jay.

Furthermore, one of the first incarnations of the thing that follows Jay that the haunted girl sees is a woman looking every bit the sex crime victim; makeup smudged, bra half off, and one sock missing, even urinating as she crosses Jay’s kitchen toward her, suggesting with all elements of her image that, in regards to her body, she has lost all control.

Shortly after this, however, It Follows stops being much about sex at all, even though there is more of it in the film. On one occasion, Jay passes the sexually transmitted demon to another boy who is killed by it in an overtly sexual way, and on another, to a boy whom, aside from the movie’s ambiguous final shot, appears to be fine.

While there is an extremely effective shot of the former boy in a cafeteria following his tryst with Jay (the score, in particular, is used very well here), for the most part, the sex goes without comment from here on out, transforming It Follows into another horror film where a bunch of teens are running from something that never gets resolved, the parents aren’t around, and the police don’t get involved, even though one of them dies and another is shown in a hospital after having been shot.

To the movie’s credit, it’s certainly interesting that Jay is the only one among the crew (who, in addition to Kelly, Paul, and Greg includes another girl who is constantly both eating and reading Dostoyevsky’s “The Idiot” on a strange, seashell shaped e-reader) able to see the presence that terrorizes them. I also initially appreciated the treatment of the teens’ parents; rather than not being a part of the movie at all, they are pointedly absent. Jay and Kelly’s mother, for example, is frequently seen in the background, though her face is almost always obscured, drinking wine, pouring Bailey’s into her coffee, or passed out on her bed with her shoes still on, an empty bottle and a full ash tray on the dresser in her room. I stopped appreciating these types of techniques when I found that It Follows didn’t seem to be using such imagery to actually say anything. Instead, it loads itself (especially its first half) with a plethora of concepts that could serve a purpose, but never actually do.

Perhaps, instead of sexuality specifically, It Follows is supposed to be about the fear of growing up in general. Jay is frequently shown floating in bodies of water by herself, implying potential fetal parallels, and one of the shapes the presence takes on is that of a woman who is very old. It is also not only Jay who talks about longing for freedom, either — on her first date with Hugh, he tells her he would like to trade places with a little boy they see, because the child still has his whole life ahead of him and sees himself as free. Jay and Paul (who might be the most fully developed character in the film, which is upsetting because he’s literally the childhood friend who wants to sleep with the protagonist, a very familiar role) also frequently reminisce about growing up together.

While I commend Mitchell for his score, palate, and ability to create a steadily impending sense of dread without relying too heavily on jump scares or gore, It Follows ends up being just another movie that throws around charged imagery for no specifically ostensible reason, which can leave one feeling unsatisfied if they are waiting to see what the pay off of the film is actually supposed to be. 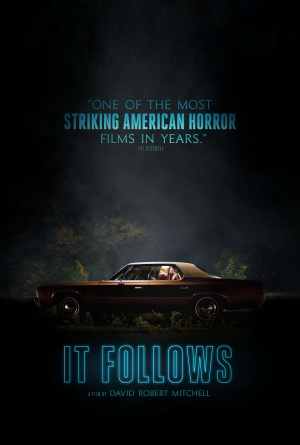