“Who are we if we can’t protect them?” Evelyn Abbott (Emily Blunt, “The Girl on the Train”) asks her husband Lee (John Krasinski, “13 Hours: The Secret Soldiers of Benghazi”) in one of the only scenes in A Quiet Place in which dialogue can even be heard. The “them” Evelyn is referring to are her and Lee’s children, around whose education, entertainment, and — most importantly — safe keeping the couple’s entire lives revolve. After all, living in a post apocalyptic world ravaged by blind monsters with lethally good hearing, there’s not only not much else better to do, there’s also not much else to do at all.

Aside from this scene, and another featuring one of the only moments in the film that offers any semblance of catharsis, the Abbott family communicates with each other by way of sign language. Given their environment this is, indeed, the safest way to speak, but their fluency is actually a remnant from their old world, rather than a product of their current lives; teen daughter Regan is deaf (portrayed by Millicent Simmonds, “Wonderstruck,” a young actress who is deaf as well). And while this ability to talk tacitly is the biggest thing keeping the Abbotts alive, the trade off is that Regan herself, the very reason they all learned how to sign in the first place, is by virtue of being unable to hear either noises that might draw the monsters or the sounds of their subsequent approach, notably more vulnerable than the rest.

In a way, that’s what A Quiet Place, which follows the Abbotts from the 89th day after the world as we know it has ceased to exist until some time after the 473rd, is about: Vulnerability. The quiet cumulative terror of always being in danger but never being able to call for help. More than that though it’s about family and, even more specifically, teaching one’s children the skills they need to acquire, and the dangers they’ll need to avoid, in order to survive, while also attempting to carve some time out for relaxation or fun. Those are some of the most tense moments of the film, too — the times when recreation transforms into disaster, or almost does.

Naturally, with such a small and related cast, A Quiet Place is also about relationships. One of its triumphs (and one of many places in which the natural chemistry between Blunt and Krasinski, married off screen since 2010, truly shines) is the way the film depicts nonverbal communication between members of a family. Three instances particularly exemplary of this are a shared look between Evelyn and Regan across the dinner table, a beautiful slow dancing scene between Evelyn and Lee in the basement, and another set at the table again, when the family holds hands and closes their eyes for an approximation of the amount of time it would take the four of them to say grace.

Through and through, the acting is truly phenomenal. Anyone familiar with Blunt’s extensive body of work knows what she can do, and any fan of Kransinski’s will be delighted to see just how much more Jim Halpbert from “The Office” is capable of. But it’s Simmonds, who awed critics with her breakout role in “Wanderlust,” and Noah Jupe as her brother Marcus, whose previous acting includes the only impressive performance in the disaster that was “Suburbicon,” who truly steal the show. Their characters are believable as post apocalyptic children (Regan’s angsty relationship with her father would likely still exist, if for different reasons, had the world not come to an end, as would a beautiful and symbolic moment in which Marcus pantomimes driving a car), and have separate journeys as siblings and individuals too.

In a very interesting way, every member of the Abbott family has their own redemption narrative throughout A Quiet Place, each of which is fully realized and culminates in one of the most emotional, but ultimately triumphant, scary movie endings I have ever seen. The planting and payoff (one word: Nail) achieved by the tightly written script is not so choreographed as to be wholly reminiscent of the delightful Rube Goldberg that was 2016’s “Don’t Breathe”; it’s more like a meticulously constructed world inhabited by an extremely well prepared family acting out a garish demonstration of Murphy’s Law.

That’s one of the only problems with this movie, actually. While it does an excellent job of portraying the reality of this particular apocalypse scenario in an aural sense, the expensively costumed Abbott family is almost too well prepared. This certainly isn’t an underdog story. Even living in terror as they do, they do so on a gorgeous bucolic upstate New York farm. Over a year after the outbreak or invasion or whatever it was (we are neither told nor need to be), while we do see Lee and Marcus hunting for food, big things like electricity and small things like an accurate calendar and markers to write on it with, are never far from hand. This abundance of resources doesn’t end at the Abbott family home, either. In the first scene, we see them quietly raiding an abandoned convenience store for medicine for one who has fallen sick. Both the amount of pill bottles and the amount of pills in each at the store almost 100 days after the creatures arrived are highly unrealistic.

So it’s interesting — as much as, especially in this age in which conversations about representation (especially in regards to people of color and those with different disabilities) abound, one might feel inclined to applaud the casting of a deaf actor who uses a cochlear implant to portray a deaf character who uses a cochlear implant, this is still a movie about rich white people and the elaborate coping and defense mechanisms their access to resources have allowed them to employ. (I’m not even necessarily mocking the film right now, just trying to get ahead of the thinkpieces that will tout it as some inclusive masterpiece when really they just did one — still good! — thing).

Other than that, there are very few issues with this plot. The main questions I have revolve around a small detail about the creatures and one of the “everything that can go wrong will go wrong” moments Evelyn finds herself in with her youngest child at the end. Firstly, the monsters make a strange clicking sound while they’re listening which is reminiscent of echolocation strategies certain animals use. However, even as they make these sounds, it is clear that the creatures have zero situational awareness, and are entirely blind, which makes some of their other movements somewhat retrospectively unrealistic. And to avoid spoiling the context around my second question, where did all that water come from?

Despite these minor flaws and because of its major strengths, A Quiet Place is sure to be one of the standout movies of 2018. Somewhat more science fiction thriller and family drama than conventional horror flick, Krasinski shows an immense command over pacing and tone that left most audience members in my personal periphery literally on the edge of their seats. I can’t wait to see what he (and Blunt, and especially Simmonds and Jupe) are planning to scare us with next. 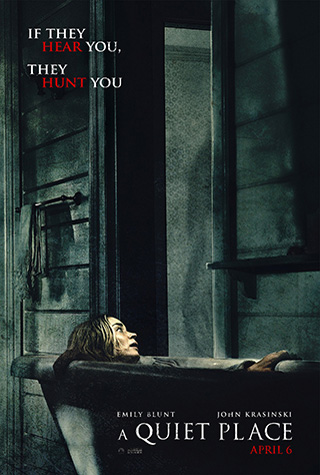