Don’t Breathe opens with a floating aerial shot over a picturesque neighborhood street. Birds chirp happily as the sun warms the trees and houses with a golden glow. From behind, we approach a man walking down this quiet street, and we discover with horror that he’s dragging something behind him — the body of a girl who’s being pulled along by her hair. Her eyes are open, but we aren’t given enough time to determine whether she’s still alive before the scene is yanked away.

Instead, we are pulled back a day or two in time as three young adults enter a Detroit home, disarm the home security system in under 30 seconds, and begin pilfering items from drawers and closets. They snatch electronics and accessories and leave behind a little destruction in the form of broken vases and a rock thrown through the door’s window as they depart. In the getaway car, Rocky (Jane Levy, “Evil Dead”) languidly watches a crawling ladybug as Money (Daniel Zovatto, “It Follows”) and Alex (Dylan Minnette, “Goosebumps”) discuss their future plans; Alex’s father works for a home security company and has access to devices and keys that will allow the three to continue their exploits. Money and Rocky reveal their plans to leave Detroit, like everyone else has, and Money knows the one job that can finally help them reach their goal. He tells them about a house where an old Army vet lives; his daughter was tragically struck and killed by a car, and after a long legal battle, he was awarded a $300,000 settlement. It takes a lot of convincing, but once Rocky and Money get Alex to reluctantly agree, they check out the property, develop a plan, and choose to make their move that very night.

Upon a second viewing, it turns out the neighborhood is nowhere near as picturesque as the opening scene would have us believe — every dilapidated house is abandoned, overgrown, and the lawns are littered with debris. The only house still occupied belongs to the Gulf War veteran (Stephen Lang, “Avatar”), who lives there alone with his Rottweiler. The three subdue the dog, and go to work trying to find a way inside. The doors have multiple locks, and the windows are barred, save for one small bathroom window, which Rocky uses to slither inside. After disarming the security system, the three remove their shoes to ensure their silence and quickly search for the cash, until the old blind man abruptly appears in the living room. Rocky freezes with Money, hoping to escape detection, but when Money confronts the veteran with a gun, the tables quickly turn. He padlocks the back door, secures plywood over the bathroom window, and listens intently for other intruders. For a while, you think the would-be-thieves will be able to hide successfully, but once the veteran discovers there are multiple pairs of shoes on the floor of his living room, the hunt truly begins . . .

Don’t Breathe follows a deceptively simple premise that grows more complex with each passing moment. Written by Fede Alvarez (who also directs) and Rodo Sayagues, the film masterfully holds its audience in a vice grip for its hour and a half duration. Going into the film, you hold very little sympathy for the three young adults — why would we possibly sympathize with such disrespect? After all, they’ve chosen to break into the home of a blind Army veteran who lives alone! Alvarez answers this question by taking some time to set some backstory, especially for Rocky, who lives with her mother and her mother’s boyfriend, neither of whom seem to care much for her well-being, or the well-being of her little sister. As they sit smoking and drinking on the couch, Rocky prepares a meager meal for her little sister, and promises her that they’ll move away to California, therefore setting the necessity for this one last job. Further emphasizing her intention to grab what she needs and leave, Rocky is appalled when Money reveals he has brought a gun with him. Alex is presented as a sympathetic character in love with Rocky, but held back by a lack of confidence and a sense of responsibility — Dylan Minnette’s portrayal is very successful here, as the audience comes to regard Alex as the dependable buddy who’s permanently stuck in the friend zone; he and Rocky are the ones you’re rooting for, despite their frequent terrible decisions.

The craft of this film is the real star, however. Don’t Breathe is very well-shot, utilizing oblique close-ups that repeatedly pull the audience into tense claustrophobic moments with the characters. Pedro Luque’s incredibly effective cinematography takes center stage time and again, the most notable examples being a fascinating tracking shot as they check out each of the rooms in the interior of the house and the use of night vision camerawork that throws the characters and audience into a simulation of the war veteran’s daily existence; the irony here is that he’s by far the most adept at moving through the darkness, which doubles the intensity of the sequence. Stephen Lang’s Army vet is as formidable an opponent as you could expect him to be (arguably, even more), and as much as Money underestimates him, he surprises both the characters and the audience.

Like Lang’s Army vet, Don’t Breathe is not to be underestimated. This is not a film about torture and gore; it’s about suspense, tension, and the ever-shifting lines of “victimhood.” You’ll be amazed how many times you shift your allegiances. The film is very appropriately named too, because you’ll find yourself holding your breath just as often as, if not more than, the characters themselves. While it’s not a perfect film (there are a couple of small events that are a tad unfeasible for my tastes and a small handful of inconsistencies I’d like to double-check upon a second viewing), it’s an outstanding thriller that’s heart-pounding, unflinching, nail-biting, and very much worth 90 minutes of your time. 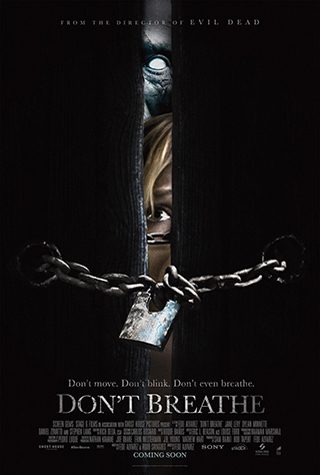