Miao Wang’s Maineland is a seemingly straight-forward documentary feature profiling Chinese students — members of the enormous wave of “parachute students” — competing to study abroad in the United States. Filmed over three years in both China and the U.S., the film follows two affluent and cosmopolitan teenagers as they settle into boarding school in rural Maine of all places. Since 2009, the film explains, the number of Chinese students taking the national college entrance exam has been in decline, and those foregoing the exams mostly choose to study abroad instead. With the economics of U.S. boarding schools also in decline, these institutions depend in large part on the tuition payments of international students to keep the lights on. Theirs is an arranged marriage of education and economics based on necessity.

For these students, beyond language barriers and homesickness, the inevitable culture clash is most likely a reflection of having left behind a bustling metropolis for the middle of nowhere U.S.A. The population of Fryeburg, Maine was 3,449 at the 2010 census. By contrast, in 2016, Shanghai was home to an estimated 24.15 million. Though drastically different as these population densities may be, both locales are equally homogeneous in their demographics. 98.8% of Shanghai’s residents are of the Han Chinese ethnicity, while 1.2% belong to various minority groups. The racial makeup of Fryeburg the town is about 94.4% Caucasian, although the Academy offers a more diverse representation.

This educational experience, however, is billed as an opportunity for international students to develop their language and critical thinking skills, but it’s hard not to view this as a type of masochistic confinement as these naïve, yet wordly, urbanites are suddenly thrust into “Trump’s America” (he won 52.1% of the vote in Oxford County). Presumably since shooting began long before this development, Wang is less interested in exploring the larger sociological and economic questions, and instead takes a more narrow view by following two particular international students on their journey through the boarding school system. Away from home for the first time, with few cultural substitutes, these students are forced to grow up faster than most, a theme represented in her having to cull from three years’ worth of footage to edit together a 90-minute documentary.

But as much as things are different in Maine, outgoing artist Stella and introverted musician Harry are still faced with universalities of adolescence. Harry favors video games over socializing with other students. Stella becomes disillusioned with her father after learning that he cheated on her mother. Both joke about the weight they’ve gained abroad — a poke at the dreaded “freshman fifteen” and America’s pervasive obesity epidemic. And both ultimately express disillusionment over the “American Dream” as their fuzzy visions of American life come into sharp focus.

Before expectations lead to disappointments, Maineland introduces us to Harry and Stella’s motivations for studying abroad. Stella’s father is a self-made businessman and he would like her — his most like-minded child — to take over the helm. She’s interested in pursuing a career as a teacher. From her Fryeburg classes, we also learn she’s a very talented artist, exhibiting an aptitude for architectural drawings and sculpture. She ostensibly enters this program to broaden her horizons and pursue her dreams, but still ends up bound by her father’s dreams and expectations for her. By alternating between scenes of time spent at home and away, the film is primarily interested in the pressures of parental and societal expectations, and how these kids internalize such responsibilities.

In showcasing the backgrounds, ideals, and temperaments of two very different Chinese students, the film, which begins as a thoughtful meditation on the power of diasporic representation, cultural expectations and the pains of growing up, then turns into an interesting microcosmic study of globalism versus nationalism. Harry’s time spent in the U.S. has made him more introspective — both about his goals and the merits of his homeland. He’s developed an interest in philosophy, and has a theory about the three levels of personal enlightenment. He is focused on individual growth and gaining financial and intellectual independence. Having spent significant time abroad, he feels more deeply about and truly admires his homeland. Meanwhile, Stella has embraced the experience in a different way. Fryeburg Academy is far from the “High School Musical” of her expectations, but she takes up cheerleading and dancing (both collaborative team activities) as a way to replicate that experience, and made some of her best friendships as a result. In a bizarre twist, it is actually her worldview that more closely supports the value of Chinese collectivism.

The struggle to fit in among high school peers is exponentially magnified for our international students. One self-reflective group observes that Chinese students tend to stick together. When pressed by a teacher, they speculate such associations reflect a desire to speak their native tongue, and that such preferences are predicated on the fear of making a mistake when speaking English. The group of students also expressed interested in crafting their own documentary about the perceptions of Asians and Europeans, and how media and misinformation work in conjunction to pervade these views. This meta-narrative tangent — though ultimately abandoned — is the most interesting aspect of Maineland, and the films suffers from the lack of inclusion of what these kids get up to. Regardless, they aver there is power in telling your own story, and Wang obviously concurs.

The Fryeburg bits mostly play as advertisement for the school, while also highlighting a certain out-of-touchness in the administrators and staff. But there’s one such exchange that speaks to the film’s thesis. In a meeting with her college/career counselor, Stella expresses interest in pursuing both education and business. She wants to be a teacher, but also knows business is what is expected of her and the most reliable way to take care of her parents as they age. The counselor inquires, “Is that a conflict for you? Can you marry both things?” And this same question is posed by the film itself while showcasing how the line between education and economics has blurred. Stella thinks she can marry the two, but Wang is more skeptical of the union.

The film closes, as most high school coming-of-age stories do, with Stella and Harry’s bittersweet graduation. For all the ways their experiences don’t mirror mine, it felt oddly like my own high school graduation. Everyone is finally getting along, and the excitement about moving on is only mired by the melancholy of saying goodbye. There is that distinct ironic feeling of being made to leave now that you’ve finally got it all figured out. The closing of one chapter is, of course, the beginning of another, and Maineland eloquently captures this finality and open-endedness in its resolution, for we know their stories are far from finished. 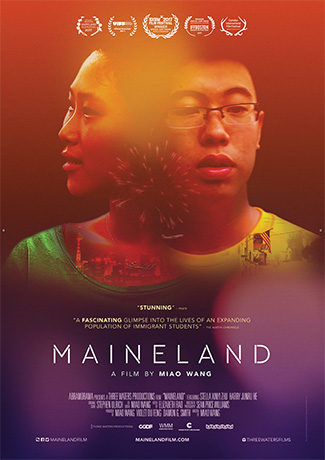