For a film ostensibly about people in the throes of existential crises, the characters in Under the Eiffel Tower still make a show of enjoying life’s simple pleasures. But not even classic romantic comedy clichés, the beautiful French landscape, market day montages, plates of good food, glasses of better wine, parties al fresco, acoustic guitar music, and sweetly uncoordinated dancing can save the film from its worst impulses.

And please believe me when I say I take no pleasure in telling you just how much I hated it.

Freshly fired from his job as a Kentucky-based bourbon salesman, Stuart (Matt Walsh, “Office Christmas Party”) tags along on a friend’s family vacation to Paris. There is little indication of Stuart’s relationship to this threesome — a couple of his contemporaries and their 24-year-old daughter — other than a father’s bizarre encouragement, “You know how much Rosalind adores you.” Apparently, Stuart — the only person to have bothered reading her Ph.D. dissertation — and Rosalind (Dylan Gelula, “Support the Girls”) share some kinship as self-regarded sophisticates, so you know where this is headed. The best thing I can say is that the film gets there quick, and within five minutes Stuart makes it weird by proposing under the Eiffel Tower to a woman half his age before returning to the airport in disgrace. While engaged in quiet desperation (a state attributed to Thoreau here and cornered by cinematic schlubs throughout history), he meets Liam (Reid Scott, “Home Again”), an injured Scottish footballer and self-proclaimed Lothario. Together, the two embark on a trip across the French countryside, but don’t expect big laughs from this “Veep” reunion.

For not even Stuart’s faux pas could compare to the awkward experience of actually watching this movie. From his horrible proposal to Scott’s horribly confounding accent, much of the film centers around these two razzing each other in front of the poor Parisian woman assigned a seat in their train car. At first, operating under the assumption (a bold one for two men in France who clearly don’t speak a word of French) she doesn’t speak English, they talk about her as if she isn’t three seats away. And this is far from an isolated incident, for Stuart is caught gossiping behind her back not once, not even twice, but three times throughout the film’s 90-minute slog! They never ask her a question nor make an introduction. It’s all peacocking, mansplaining, and one-upping each other with their stupid stories. And she’s just meant to humor them. Throughout this encounter and the dinner that follows, they never take time to learn about another person or the country they are visiting, thus distilling fundamental errors often made abroad into their interpersonal relationships.

Over the course of the film, Stuart, who prides himself on being a great salesman, manages to negotiate his way into a private dinner at a “Michelin Star” restaurant, free room and board at a beautiful chateau, possibly getting his old job back, and a blossoming relationship. The film is far less successful in achieving its goals, and I’m not buying whatever it’s meant to be selling. I don’t buy his mutually respectful friendship with Rosalind and certainly not his romantic one with the only slightly more age-appropriate Louise (Judith Godrèche, “Stoker”), the woman from the train whose name we don’t learn well into the film since neither of her lecherous suitors even bothers to ask.

I can appreciate that Godrèche is a credited co-writer (along with director Archie Borders and David Henry), and her input is apparent during the film’s only real conflict, “Where do I belong in this story?” she rightly questions. Godrèche tries to give Louise a voice, though it ultimately feels hollow. One gets the distinct feeling of the film trying to course correct for years of rom-com wrongdoings. The picture is over-lit and oversaturated, and the point is unsubtly made in stilted dialogue (“Has anyone told you that you smile a lot? You’re just as beautiful when you don’t smile”) and late-breaking twists that invert more traditionally gendered plot contrivances.

Somehow still, the relationship Under the Eiffel Tower wants the audience to root for and invest in feels just as hurried and disingenuous as the misguided proposal that set Stuart’s whole coming-of-middle-age Eurotrip in motion. Stuart drones on about wines and spirits needing time to age, develop, deepen. It’s a suitably accessible metaphor for relationships, unfortunately, the relationship between Stuart and Louise is afforded no such breathing room.

Under the Eiffel Tower fancies itself self-aware. And that may be its worst offense. The film is like Stuart as he rolls his eyes and regards himself so much better — more educated, more respectful, more sophisticated — than the embarrassing American couple joining Louise’s wine tour. It thinks itself better — more cultured, more respectful — than romantic comedies that have come before, but it’s neither smart nor funny nor cute enough to pull that off. Not dissimilar to Liam, the movie greatly overestimates its charm and effect on women. There is a point where Stuart and Louise joke about her being a cliché, and Stuart pleads, “Let me have my stereotype.” Borders allows his film all the clichés it desires: Stuart rescues Louise from the chateau tours she hates to give; he takes an interest in her painting; prepares a delicious meal from the hodgepodge ingredients in her refrigerator; and gives her life (as well as his own) a renewed sense of purpose. He gets to be the hero, and she only gets to be the girl. 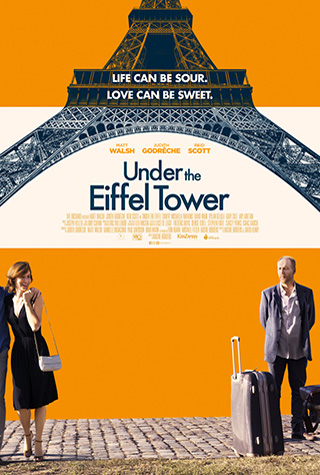