Ah, what would this time of the season be without another motion picture featuring sex, drugs, rock and roll (and loud, annoying rap, to boot), fights, prostitutes, female pimps, gun threats, corporate layoffs, drunk driving (among other idiotic things committed while intoxicated), psychological disorders, sacrilegious sequences, rampant vulgarity, sexual harassment, child abuse, serious physical and mental injury, embarrassing deviant fetishes, a deluge of “F” bombs, genitalia shots and a stoned Santa Claus (and all of this without James Franco OR Billy Bob Thornton)?

Well, it just wouldn’t be a traditional American yuletide, would it?

To bring us that “Spirit,” Paramount Pictures presents all of this and more (actually LESS, as far as your entertainment dollar goes) with Office Christmas Party, a crossbreed between “The Night Before” and “21 and Over,” but without the inherent humor, class, sophistication and overall intelligence of either of those movies (I’m kidding, of course, as those two films were horrible, as well). Happy Holidays and God Bless Us Everyone — that we will NEVER have to see another film like this — at least until NEXT Christmas!

Anyways, this project is so intricate and involved, it takes the effort of two directors, Will Speck and Josh Gordon (“Blades of Glory,” “The Switch”), with a comedic script so thoughtful and hilarious it utilizes the combined talents of Justin Malen, Laura Solon, Jon Lucas, Scott Moore, Dan Mazer and Timothy Dowling (and probably even more who saw the final cut and voluntarily had their names removed from the credits) to dream it up. Office Christmas Party is opium for the masses, if opium in this case is someone urinating and the masses are the viewers of this sludge (oh, there’s public urination, as well, I just thought I would add that special feature before I completely blocked it from my psyche).

I suppose I had better explain what little coherent plot there is of Office Christmas Party to the four or five readers who may still be foolish to want to still see it. Josh Parker (Jason Bateman, who has appeared in his share of turkeys, remember “Mr. Magorium’s Wonder Emporium” or “Identity Thief”?) works for a hi-tech software company, although we really do not know what goes on there except that his co-worker, Tracey (Olivia Munn, who too has a streak of appearing in terrible movies going back to 2014’s “Deliver Us from Evil” all the way through “Ride Along 2” to this dud), has invented a way to log onto the internet through a toaster, or something like that (in full disclosure, I lost track of the story within the first ten minutes or so).

Meanwhile, the company’s CEO, Carol Vanstone (Jennifer Aniston, “Horrible Bosses 2”), wants to close the branch because it is not bringing in enough revenue and also because the manager is her moronic brother, Clay (T.J. Miller, “Deadpool”). One cannot really blame her for closing up shop, though, considering almost the entire workforce consists of complete idiots with little or no social abilities, tact or even the most basic job skills. The employees also seem to hate one another with a passion and have no desire to do even the simplest tasks for which they are being paid. How the firm stayed in business THIS long is the true Holiday miracle here.

Anyway, Carol orders Clay to fire everyone two days before Christmas and to forego the traditional party, but of course, the cretin spends the last of his company’s funds to throw the most garish celebration since 2015 when Seth Rogen humiliated himself in “The Night Before.” Yes, pot, cocaine and every type of alcoholic beverage is mixed with bad music, nudity, dirty dancing and profanity to create one of the most depressing festivity scenes in Hollywood history (or at least since 1979’s “Caligula”).

What happens after this you ask?

Let’s see, a worker who bragged to his subordinates that he has a girlfriend is forced to hire a harlot for the evening; a single-mother secretary is so lonely she falls for two geeks and a stalker; a potential multi-million dollar client (Courtney B. Vance, coming off an Emmy Award for playing Johnnie Cochran in “The People v. O.J. Simpson: American Crime Story”; he’ll receive no such recognition for this bomb) gets high and leaps off a balcony; and an uptight Human Resources manager (Kate McKinnon, a “Saturday Night Live” cast member who has also hit the trifecta of bad movie participation this year with roles in “Ghostbusters” and “Masterminds”) who loosens up during the course of the evening.

The problem with these situations, however, is that not a one of them is anywhere near funny. They are actually more pathetic and cringe-worthy than mirthful, while the jokes are staler than the annual Holiday fruitcake you receive from that one aunt you’ve never seen before. In fact, it’s so hilarious that one of the main characters almost ends up dead at the end. Ha! Take THAT, Marx Brothers.

There are certainly precedents for well-made seasonal comedy pictures (such as “A Christmas Story,” “Bad Santa,” “Home Alone” and “National Lampoon’s Christmas Vacation,” among others), but this, however, is not one of them. Then there is the acting, of which no one comes out looking good at all, especially Bateman and Munn, who have about as much romantic chemistry as Robert Blake and the wife he murdered (uh, allegedly).

Loud, embarrassing, headache-inducing, chaotic and a complete waste of time — just like any office party — Office Christmas Party is easily one of the worst movies of the year, but also one of the most avoidable . . . just don’t see it. That advice is my simple, humble gift to you. Heed it. 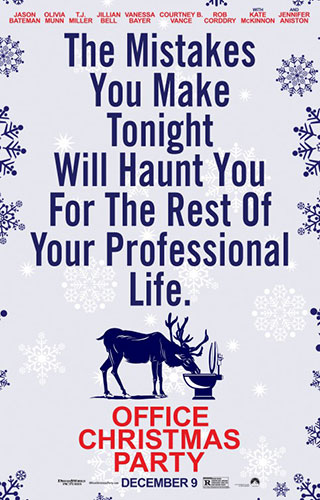