Despite taking place largely in a single location, Fabio Guaglione and Fabio Resinaro’s film, Mine, manages to tell a varied story of life experiences, a story that touches on family history, personal regrets and misunderstandings, and even a subtle political critique of US militarism. Playing like a cross between “The Hurt Locker” and “127 Hours,” plus a little bit of “The Grey,” Mine follows the misadventures of two US Marines, Staff Sergeant Mike Stevens (Armie Hammer, “The Man from U.N.C.L.E.”) and his spotter Tommy Madison (Tom Cullen, “The Last Days on Mars”). Dropped into hostile territory for a covert operation that erupts into combat, Mike and Tommy go on the run through the (presumably North African) desert towards an extraction point, only to find themselves in a minefield. Once a mine is triggered, Mike remains rooted to the spot and all manner of troubles assail him.

These troubles occupy the bulk of the film, but early on the viewer is treated to a gripping combat sequence. Initially attention narrows to Mike’s rifle sight, before the operation bursts into gunfire. Rather than indiscriminate spraying of bullets, the battle is controlled and precise, necessary when the Marines are outnumbered. A similar sequence occurs later that is also contained and focused, but for a large part of its running time, Mine becomes increasingly surreal. As heat, exhaustion and dehydration affect him more and more, Mike hallucinates strange events and other figures giving him advice while key moments from earlier in his life also haunt him. The parallels of these key moments with his immediate situation express the central conceit of the film, a point explicated in a “wonderfully philosophical discussion” between Mike and a local Berber (Clint Dyer, “Unknown”), that single steps are critical. Crucial metaphorical steps for Mike are presented literally, as we flashback to his family life as well as his relationship with his girlfriend Jenny (Annabelle Wallis, “Annabelle”).

Particularly effective is the film’s fragmented delivery of Mike’s history, as part of an earlier event is presented before the film cuts to another similar sequence that is itself only presented in part, and so on. Visual composition is important to this restricted delivery, as the directors use match cuts between Mike in different locations in a kneeling pose, as well as shots of his foot coming down in the exact manner. These match cuts emphasize the contingency associated with single steps (literal and metaphorical) in a way that could be heavy-handed but instead feels of a piece with the surrealism. The weird touches include a little girl appearing seemingly from nowhere as well as walls rising out of the sand around our hapless hero. More unsettling are night sequences in which Mike is surrounded and threatened by undefined animals that appear only as reflected eyes and menacing growls before suddenly attacking. Whether these are lions, jackals or wild dogs is never clarified, even after Mike fights some of them (from a kneeling position) and their corpses are seen in daylight. Much like the wolves in “The Grey” and the bear in “The Edge,” these predators are manifestations of nature’s savagery towards the helpless man, while the indiscriminate mines manifest humanity’s inhumanity to each other. This is part of the film’s political critique, as mines and other machinery of war ultimately place everyone in danger.

The sand and the landscape are significant characters in their own right, the merciless desert providing a harshly beautiful backdrop to the dramatic events. Within this bleak beauty and on screen throughout the whole film, Hammer proves himself an engaging and sympathetic presence. Initially Mike is taciturn and his large frame radiates strength and resolve, but as the film progresses he is broken down by his ordeal and not only becomes physically weakened but also more talkative. The supporting cast members are also strong, Tommy providing a garrulous contrast to the introverted Mike. Although the (flashback) appearances of Mike’s father and mother (Geoff Bell and Juliet Aubrey) are brief, their presence is memorable and their scenes even shocking. Worthy of special mention is Clint Dyer, who as the Berber both exhorts Mike to take the crucial step and provides levity and wry humor in the face of Mike’s predicament.

The most impressive aspect of the film, however, may be its remarkable sound design, created by Omar Abouzaid (sound editor), Mauro Eusepi (foley artist), Hector Martín (sound recordist) and Sandro Rossi (re-recording mixer/sound effects editor). Helicopter blades play over the opening credits, reminiscent of “Apocalypse Now.” At moments of high drama, the film becomes silent, the screams of Mike muted which helps to convey his isolation and helplessness — in the desert no one can hear you scream. General sound is also lost when bombs and mines go off, the aural palette reduced to a high-pitched whine that simulates the loss of hearing after an explosion. This is the film’s great strength — successfully placing the viewer in an analogous position to that of its beleaguered protagonist. This is hardly new for war films, but not all manage it convincingly, resorting to bombastic pyrotechnics and excessive gore. Mine draws the viewer in with restraint, making a virtue of its exploitation film simplicity. A man on a mine may not sound like the most engaging set up for a film, but by compressing a life into this singular experience, Mine succeeds as a gripping thriller and a compelling drama. 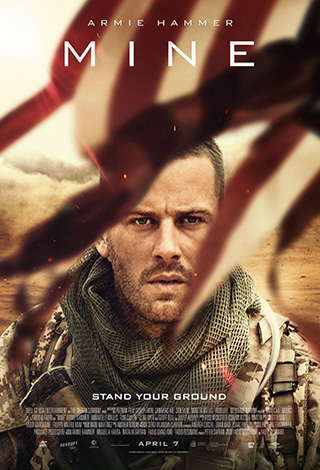