The events of the London riots just over six years ago in 2011 proved a shocking exhibition of a city’s built-up rage and inner turmoil. Many will have read about the on-going arson, looting, robbery and vandalism as well as witnessing the mass chaos that was streamed across news channels worldwide.

A youth-in-revolt mentality was associated as many labelled the acts as a result of “boredom” without recognizing the underlying social issues (the catalyst was an unarmed black man was fatally shot by a London metropolitan police officer) causing such a display of anger. A generation’s reputation was tarnished, but more significantly, London and five surrounding boroughs had to recover from the fresh wounds of social angst. Despite this history being summarized before the film commences, Six Rounds is not a story about the riots. Rather it’s about a nation post-riots and the lasting effect it continues to have on young black men and the conservative majority alike.

Written and directed by Marcus Flemmings (“The Conversations”), Six Rounds is all about making choices. Even the production choice is distinct — black and white monochromatic cinematography is only sporadically interrupted with scenes so brief in color, delivering extraordinary contrast of lightness and darkness that enables the moments in slow-motion to be exaggerated. Another choice undertaken by Flemmings is choosing to tell a fictitious tale post-riots. Considering the harrowing reality that it was, to venture into a fictional narrative is strategic as Flemmings’ characters represent England’s past and present while they struggle to solve personal dilemmas surrounding race, debt and drugs.

Stally (Adam J. Bernard, stunt double for John Boyega in “Star Wars: The Force Awakens”) is a young boxer presented with a career-changing choice that could jeopardize any hope of fighting in the future. To accomplish this, Flemmings presents a clear conjuncture between Stally’s life in the ring and his race. When he is not with his white, private school educated girlfriend (Phoebe Torrance), Stally is fighting his white friend in the boxing ring. His day job as a door-to-door salesman allows Flemmings to carefully insert poignant interactions with the older generation, whose views on the riots and their presumptions of race — whether negative or positive — enables Stally’s inner conflict with his own identity to erupt.

It is here where the film thrives in terms of theatrical conviction. Adam J. Bernard, in his first featured role, delivers immense power and authenticity in his characterization of a man dogged by his past and hesitant of his future. His numerous monologues — in which the fourth wall is broken — pushes the film toward a dramatized reading on a society collapsing over fragile ignorance.

Some may not be thrilled with the lack of grandiose fight scenes and training montages commonly found in many other boxing films, but Six Rounds really isn’t like most boxing films. What is to be appreciated is the artistry of a poetic, still and expressive piece that justly sheds light on a social issue that is still sadly relevant to this day. 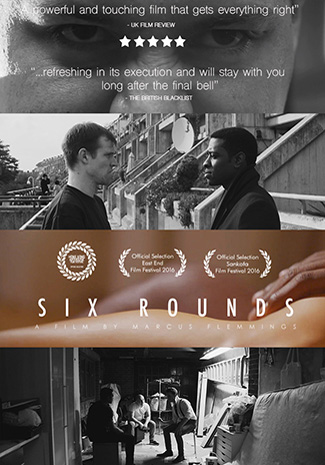