“Lawrence of Arabia” is a respected title that conjures images of adventure, masculinity and the mystic charm of the Middle East. A film of epic proportions, it glamorized explorer T.E. Lawrence, an academic whose presumed knowledge of the culture and politics of the area impressed both English and Arabic leaders. Unbeknownst to most, however, English born Gertrude Bell, has a similar resume, and has been attached to the label of the “female” Lawrence of Arabia (or should that be inverted so Lawrence would become the “male” Gertrude Bell?). Shining a long overdue spotlight on Gertrude and her remarkable accomplishments, directors Sabine Krayenbühl and Zeva Oelbaum bring Letters from Baghdad.

These are just some of the titles assigned to Bell during her lifetime as a woman capable of extraordinary feats. A seminal figure in shaping relations and ultimately changing the political landscape between Britain and Middle-Eastern countries including Iraq and Syria, Bell’s life is chronicled in a captivating and historically accurate montage of images and archival film. Through the film, Bell is described as stubborn and relentless in her nature, traits that proved to be significant aids in building everlasting relationships with Arabic leaders and their wives, giving Bell the advantage of expressing her well-rounded opinions on the Ottoman Empire. It is here that Bell along with other English explorers — including Lawrence — propelled herself into a society so vastly different from her own, voyaging through desert terrains, riding camels and exploring mosques.

On first view of Letters from Baghdad, there’s an instant gratification of being transported to the past. The documentarians have together created a convincing time machine back to the late 1800’s. The grainy appeal of the celluloid-like film with its ripples and super-exposed spots may be a simple way of conveying the past but ultimately it succeeds in communicating what it needs to. This raw archival footage provides a foundation for the entirety of the film and is utilized to an extent where its only purpose it to provide a sense of place and atmosphere.

The film follows a strict formula which, to its benefit, gives the piece a structured, well thought-out progression from Bell’s early days at Oxford University to her liaising skills in the Middle-Eastern lands. Narration, interview, image montage — these three key story telling elements are simply all the necessary facets used to convey this one fascinating woman’s achievements. It is in these aforementioned narrations and interviews that the precision to historical accuracy and fidelity to the past shine as an obvious result of thorough research, both the filmmakers and actors. As for the actors who assumed the roles of those friends and colleagues close the Bell, their breaking of the fourth wall welcomes intimate and personalized descriptions of Bell that layer her complex character.

Another level of a real connection to the Middle East is the use of its native tongue. There are no put-on accents or impressions of what Arabic might sound like, we are presented with the true language that cements the geographical surroundings. Tilda Swinton (“Doctor Strange”), who provides the voice-over narration for Bell, gives a beautifully paced and articulated narration that anchors Bell’s presence into the medium of film incredibly smooth. She gives her voice a gentle, polished quality, yet can convict the story telling to a believable first-person tale.

Letters to Baghdad does the genre of documentary justice. Peering into the life of a woman who shattered gender roles and provoked massive change is refreshing and profoundly important. And finally, the life of Gertrude Margaret Lowthian Bell can be heard, projected and viewed as the real Bell of Arabia. 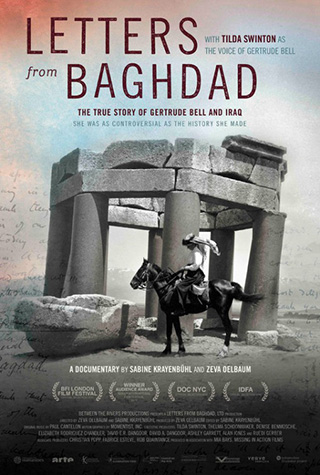