In Delusion, Frank Parrillo (David Graziano, “A Life Not to Follow”) is a middle-aged man still coming to terms with his wife’s death three years prior. After receiving a bizarre letter from her, he begins to move on and pursue a new love life. After he initiates a relationship with a mysterious woman (Jami Tennille, “Manchester by the Sea”), Frank inadvertently becomes embroiled in a noir-ish nightmare where he doesn’t know what’s real . . . or what’s dangerous . . .

Given the primary metaphor for Delusion is Frank’s grief, the film is shot mostly in muted colors to establish his perspective. Other characters reference how the sky is “so clear” and how “nothing can beat” a particular view, but we never cut to this beautiful imagery. We see what Frank sees: A generally mundanely colored world with an obviously cloudy sky. As the film progresses, colors naturally find themselves included in the frame and the sky becomes clearer. It always fits Frank’s mindset and never once feels inorganic or distracting.

Thankfully, Graziano’s performance as Frank helps punctuate those themes. Out of all of the actors in this movie, Graziano is by far the most emotionally genuine. Even if his performance wasn’t what most would call top-tier, the guy’s so sincere you can’t help but like him. I also give props to Tennille who, even though she’s playing that “femme fatale” type we’ve all seen before, looks to be having loads of fun doing it.

The film wears its stylistic inspirations on its sleeve, even going as far as to blatantly reference the 1958 film noir crime drama “Touch of Evil” in a diner scene. While there are clear Lynch-ian influences throughout, Delusion never seems to capture the slow, haunting effects. This can be attributed to the movie’s uninspired camerawork, which feels very static when it should feel dreamlike. Director Christopher Di Nunzio (who is also credited as the writer) instead relies on mostly sound and music cues along with some basic visual tricks to immerse the viewer. Some odd sound choices are present, such as characters’ footsteps being almost as loud as dialog, but otherwise that element is handled as well as it can be. Although, without creative camerawork, it can only absorb the viewer’s attention so much.

There is one thing that kept this film engaging to me, and it can be condensed down to a single word: Succubus. Hearing that word in a movie like this was like hearing a bomb drop, and anytime anything happened related to the succubus, I was invested. However, the less I say about that, the better. On the opposite side of the coin, there is a subplot with psychic characters that isn’t nearly as engrossing as the succubus business.

With a brisk runtime of 85 minutes, Delusion comes and goes quickly. It never paints a whole picture, but remains relatively coherent in its storytelling. There’s a lot more substance here than one would expect from a film this humble, but as a whole the experience is rendered insignificant when compared to similar films that came before. For horror nuts (David Lynch fans especially), there could definitely be something to unpack here. For general audiences, I’d still recommend it if you’re down to be weirded out without a complete explanation as to why. But now at least, you are aware of what you’re stepping into beforehand. 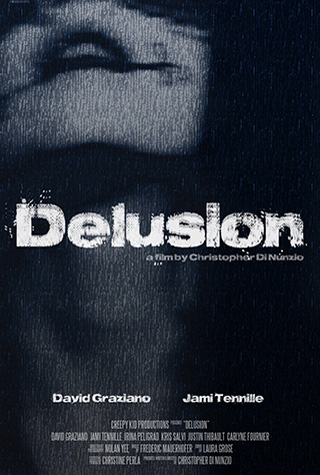