Author Victor Hugo was once quoted as saying, “There are no such things as bad plants or bad men. There are only bad cultivators.” The idea that unjust law and prejudice infect communities for generations only to create more monsters along the way is still prevalent today, especially in media. In his third directorial effort, writer/director Scott Teems brings us The Quarry, a film that seeks to explore one such permeated community and its citizens’ journeys to find absolution, but never really offers a dense perspective or a substantial resolution.

The film begins with a nameless wanderer, known as The Man (Shea Whigham, “Joker”) roaming the empty rural highways of Texas. He is kindly picked up by a Catholic minister David Martin (Bruno Bichir, “Sicario: Day of the Soldado”). Along the way, David begins to suspect the wanderer may be a fugitive, resulting in an altercation that leaves David in a shallow grave and The Man with all his belongings. Seeking refuge, The Man assumes the minister’s identity in a modest Texas town, but it’s not too long before his past begins to catch up with him.

Although never fully expounded upon, Teems teases a history of judgment and pain in the fictional town of Bevel, Texas. As The Man begins his preaching, he is met with the challenge of connecting with a predominately Mexican congregation, most of whom do not even speak English. Through his attempts to engage, however, he discovers an absence of faith in the town, particularly through Celia (Catalina Sandino Moreno, “A Most Violent Year”), a woman who has misgivings about her own past and how it has affected her family in the present.

Coming to terms with his own decisions, The Man begins to strengthen the faith in the community through his sermons about sin and forgiveness, much to the surprise of Moore (Michael Shannon, “Knives Out”), the town’s white police chief. Like The Man, Moore is propelled by a sense of duty under questionable circumstances. He’s a complicated contradiction; neither cruel nor kind. He expresses a sense of vulnerable care towards Celia — whom he is sleeping with — yet exhibits an accusatory attitude towards her cousin Valentin (Bobby Soto, “A Better Life”), a known drug dealer. When Valentin robs David’s van, he becomes the prime suspect of Moore’s growing suspicions that something sinister is afoot in his quiet town, which only become more targeted after the minister’s body is uncovered in the titular quarry.

While each character is burdened with resentment of their past, not a lot is known about any one of them to make their journeys particularly compelling. The Man bears a wound on his palm early in the film, obviously emblematic of Christ’s crucifixion, signaling his remorse and willingness to find redemption through faith. Yet, the details of his crimes are under-explained in a reveal that comes way too late to bear much significance. Valentin is irrefutably a criminal — innocent in this case — but while Moore’s persistent allegations against him are not completely unreasonable given the lack of evidence presented, a preconceived bias exists within him that he refuses to confront. And while it’s always a pleasure to see Moreno in a film, her character mostly exists to give context to the male leads around her.

Teems weaves a tapestry of muddled ethics that is mostly carried by the capable performances of his A-List cast — and makes for a few suitably engaging interactions between Whigham and Shannon in particular — but there are otherwise too few thrills or surprises to be found in the slow-burn yarn that unfolds.

The Quarry asks many questions. What is the cost of forgiveness? Do bad people deserve redemption? Where is the line between truth and lies in one’s duty to law or faith? As lived-in as Teems makes the town of Bevel, there’s a grander story to be told from these questions that never materializes, and it ultimately results in a humdrum analysis of race and faith with no clear hypothesis. 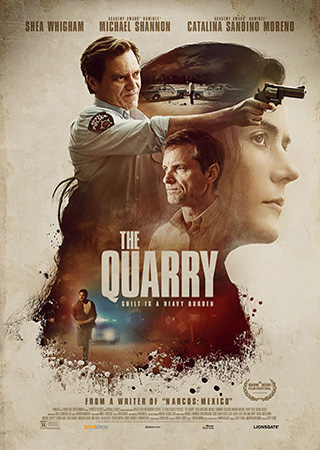