Sometimes a film comes along at the right moment, providing exactly the sort of inspiration one needs in difficult times. Such a film is A United Kingdom, the true story of Seretse Khama (David Oyelowo, “Queen of Katwe”) and Ruth Williams (Rosamund Pike, “Gone Girl”), an African tribal prince and London office clerk who married in the late 1940s. The film charts the journey of Seretse and Ruth from initially meeting and falling in love in London, through their struggle to be accepted by both Seretse’s people in Bechuanaland (later to become Botswana) and the British government. Why are the British government interested in a private marriage, you may ask? Because of the close ties between the British government and that of South Africa, which at the time had just instituted the policy of apartheid that segregated white and black people throughout the country. Seretse’s neighboring Bechuanaland is a British protectorate, and to maintain good relations with South Africa, Britain, in the form of officials Alistair Canning (Jack Davenport, “Kingsman: The Secret Service”) and Rufus Lancaster (Tom Felton, “Risen”), opposes the marriage of Ruth and Seretse. Once the marriage goes ahead, the British position as well as that of Seretse’s uncle and regent, Tshekedi Khama (Vusi Kunene, “Eye in the Sky”), moves to blocking Seretse’s ascension to the throne.

All this politicking might put some viewers off, but director Amma Asante and writer Guy Hibbert brilliantly balance official meetings and issuing of reports and edicts with personal dramas and a genuinely moving love story. Ruth and Seretse make an adorable and believable screen couple, the chemistry between the two leads creating a palatable sense of companionship, respect and affection. Oyelowo is excellent as the man who loves his country, people and wife equally, and is determined to embrace all of these without placing any of them second. Pike is equally impressive as a woman assailed from all sides, but never wavering in her decision to stick with her husband and hold to an egalitarian and, let’s face it, accurate belief that skin color is no indication of character or human value. Nor does the film tip into mawkish sentimentality, as this marriage in the public eye is one of resolve and mutual support rather than gooey-eyed sentiment, despite attacks from both Ruth and Seretse’s family, his tribal elders, her government and British people in the street who taunt this inter-racial couple.

A United Kingdom maintains clear lines of storytelling, incorporating its politics smoothly into its narrative rather than delivering a diatribe against racism. We first encounter Seretse engaged in a university boxing match where his white opponent calls him a “monkey”; when the couple walks through London they are attacked by yobbos. Interestingly, any hostility towards Ruth in Bechuanaland is far more civilized, the local women staring her down and Seretse’s aunt Ella (Abena Ayivor, “Machine Gun Preacher”) and sister Naledi (Terry Pheto, “Mandela: Long Walk to Freedom”) lecturing her on the intrusion she is making. Naledi does warm towards her sister-in-law, and in a powerful scene when Ruth is taken to hospital, these two very different women defend each other against the politically motivated and highly condescending “help” offered by the wives of the principal antagonists, Lady Lilly Canning (Jessica Oyelowo, “Captive”) and Olivia Lancaster (Charlotte Hope, “Allied”).

Similar support appears for Seretse as he battles the British government, as Labour Member of Parliament Tony Benn (Jack Lowden, “Denial”) leads a campaign in support of Seretse, who becomes a cause célèbre in the British general election. Nor does this politicking slip into shouting matches, as the intricacies of official reports, mineral surveying and Commonwealth administration are presented in a far more insidious and dangerous fashion, creating a seemingly inescapable web of legal requirements and proclamations. Yet throughout it all, Seretse and Ruth maintain their guiding ethic and principle, which is fundamentally one of love: love for each other, love for family and community, love of justice and love of country. As a result, when husband and wife are separated by official doctrine, it is shocking and heartbreaking to see them at the mercy of such powerful forces. In several sequences, they talk over terrible phone lines, and their mutual pain at having such a tenuous connection is deeply upsetting.

Asante’s deft interweaving of the romantic and political dramas takes place within a well realized period setting. The production design by Simon Bowles as well as the costumes by Jenny Beavan and Anushia Nieradzik create a convincing period milieu, while the cinematography of Sam McCurdy captures London in somber tones, in stark contrast to the red and ochre beauty of Bechuanaland, filmed on location in Botswana. This dramatic change in environment does highlight a problem with the film, which is that Ruth’s transition to life in Africa seems too easy. For a person accustomed to office work in London, the film gives no sense of the physical strain of adapting to manual labor in a completely different climate. Tshekedi asks Seretse how his wife will react when the dust gets in her eyes, but Ruth appears to suffer no ill effects of the new environment itself, although she does (briefly) contract diphtheria. Similarly, the disease and poverty facing Seretse’s people appear only in passing, which curiously makes the film seem narrow, despite its international scope.

Aside from sometimes lacking in social-anthropological detail, A United Kingdom is a very fine film, and as mentioned above a film for our time. In his first meeting with Ruth, Canning informs her that her marriage will bring down the British Empire in Africa and asks if she has no shame. As a British person, I felt shame for my country acting in such a despicable manner, and glad that our empire did collapse. Not that contemporary politics give me much hope, but much like this year’s “Zootopia” and “Arrival,” A United Kingdom does offer a hopeful message of people learning to live together, work through differences, support and care for each other, using legal and political means as well as direct activism to overcome adversity. In the current geopolitical era of antagonism, intolerance, demagoguery and violence, A United Kingdom highlights the progressive alternative, providing an instance in which love truly can conquer all. 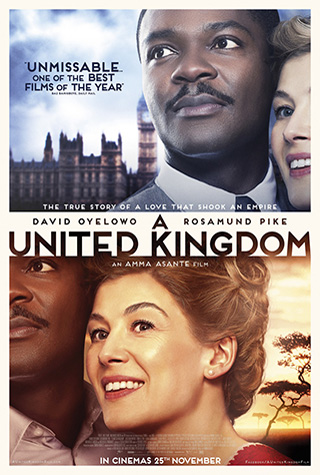