“Don’t let it be forgot, that once there was a spot, for one brief shining moment, that was known as Camelot.” — Alan Jay Lerner

While the presidency of John F. Kennedy is known for its strong leadership in civil rights and in furthering the cause of peace, Jacqueline Bouvier Kennedy, the elegant, graceful widow of the President said that “People like to believe in fairy tales,” and she did her part in propagating the myth of the brief shining moment in American history that came to be known as Camelot. The many contradictions of Mrs. Kennedy are brought to the screen by Chilean director Pablo Larraín (“No”) in his somber, impressionistic portrait of the First Lady known simply as Jackie.

Notably performed by Natalie Portman (“Knight of Cups”), Mrs. Kennedy was seen as a tower of strength by a nation in mourning following her husband’s assassination in Dallas in November, 1963, but beneath the steely façade, the film shows a woman in considerable psychological distress who was given to bitterness, drinking, sleepless nights wracked by nightmares, and thoughts of suicide. She herself said that she was “not in any condition to make much sense of anything,” but still had to take care of two young children, plan for the funeral procession, and be ready to move out of the White House.

Jackie takes us into the mind of the First Lady, providing a haunting portrayal of a woman in conflict with herself and the usurpers of her husband’s legacy. Jackie’s guilt feelings about how she could have saved her husband (Caspar Phillipson, “Love and Other Catastrophes”) from the assassin’s bullet, prevent her from feeling like a heroine, yet she is expected to show emotional control and magical powers of inner strength at a time of overwhelming national trauma. Written by Noah Oppenheim (“Allegiant”) and photographed by cinematographer Stéphane Fontaine (“Captain Fantastic”), close-ups of her troubled face bring the viewer closer to her feelings of isolation, the mood of disconnect enhanced by the dissonant score of Mica Levi (“Under the Skin”).

The film moves back and forth between events, opening with an interview with an unnamed journalist (Billy Crudup, “Spotlight”) modeled after Theodore White. It is the first time we see Jackie asserting control over what history will record. When asked how she would like her husband to be remembered, she pointedly tells him, “You understand that I will be editing this conversation just in case I don’t say exactly what I mean.” The film also depicts her televised tour of the White House in 1961, her talks with a priest (John Hurt, “Hercules”) who offers her some unpriest-like comments, and her participation in planning the state funeral, modeled on the funeral of Abraham Lincoln in 1865.

Though conflicts arise because of security concerns, Jackie insists that her two children, Carolyn (Sunnie Pelant, “Bones” TV series) and John John (Aiden and Brody Weinberg), be at her side during the procession to emphasize the scope of her loss. Through it all the myth of the JFK years begins to take shape and still dominates after more than fifty years. Though Jackie is in every frame, also featured in the film are Peter Sarsgaard (“The Magnificent Seven”) as Robert Kennedy, Greta Gerwig (“Maggie’s Plan”) as Jackie’s personal secretary, and John Carroll Lynch (“Ted 2”) as the new President, Lyndon Johnson, whose interaction with Mrs. Kennedy is notable for its coolness.

Jackie is a compelling film that provides an insight into Jackie Kennedy’s state of mind and events that are not generally well known, yet does not always reach us on an emotional level. Though Portman delivers a strong performance, perfectly recreating the inflections in Jackie’s voice and conveying the elegance of her demeanor, it is often mannered and her authenticity only shows up sporadically. Ultimately, the human being behind the legend remains elusive. 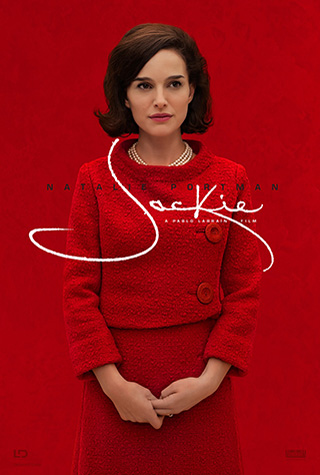