Ben (Viggo Mortensen, “A Dangerous Method”) and Leslie (Trin Miller, “The Invoking”) sought for this kind of kings out of their kin: Plato’s ideal of the philosopher king, the one who could access ideas as they are, pure, not-yet-tainted with the things of the world. Now, let’s clear this out right off the bat: Where Plato (in Plato’s time) meant kings, men, Ben and Leslie (in our time) mean men and women. Kings or Queens, the model is all the same. These are all rulers over who they are and who they want to be.

But this is where things get complicated. It is so difficult not to try to exert some degree of control over those who are, by nature, malleable. And so are children. We meet first the oldest of the brood, Bodevan (George MacKay, “For Those in Peril”), walking through the rite of passage towards adulthood as he slits a deer’s throat with his bare hands (and a sharpened knife he holds in one of them). He’s now a man, in his father’s words. The family comes back to their lodges in the middle of the forest, Ben and the six children (five really, for Bodevan has just ceased to be one). But the family is clearly incomplete. The mother is not there. Later do we learn her name’s Leslie. Later do we learn she’s ill. Later do we learn her fatal fate.

But before getting there, let’s pause a bit on what Ben does with his offspring. For a shallow viewer, he’s abusing them as he puts them on this regime of extreme discipline and almost totalitarian control. For a smugger one, he’s returning them to the place where everything started, outside a sick society and an even sicker system. Yet with eyes neither distracted by shadows nor blinded by rainbows, we can see Ben’s giving their kids the best possible education. What we meet and see over and over again throughout Matt Ross’ Captain Fantastic is that these are fit youth who use their minds with as much dexterity as they use their bodies, fit to take care of themselves, and thus genuinely (and pragmatically) take care of one another. The greatest problem Ben (and Leslie) had is that there’s a world out there, right at the forest’s shore, and this is a world the kids will have to meet sooner than later. And this world is much more merciless than the one in which they live, since nature loads its dice for nobody.

Then Ben wakes up one day and has to go to the nearest station where he asks about Leslie’s state. She’s dead. Slit her wrists with her bare hands (and probably some sharpened object she held in one of them). Then, what happens when the happiest and the justest receive and unjust blow? We learn where Leslie’s true ailment really was — that it was in her mind. Ben tried to save her by taking her off-the-grid and it seems that there they were happy while they learned to be just. But it was not enough. And Ben did what every person who thinks they’re right would do: Make her do what’s best for her, till this is clearly not the case. Then they have to admit they were wrong. And that’s the whole story.

After this revelation, Captain Fantastic turns into a road movie, as Ben and the brood cross the country all the way to New Mexico to attend Leslie’s funeral. There’s an extra motivation here. Ben finds Leslie’s last will, with detailed instructions as to what she wants to happen to her body. And this is certainly not what Leslie’s parents, particularly her father, Jack (Frank Langella, “Robot & Frank”), have in mind. So there they are all, on their way to disrupt a Christian ceremony. To make sure that Leslie’s last wishes are respected.

I know that you might be thinking I have already given away major plot points, but I think I haven’t. This should only entice the reader to learn more about these characters’ fates. Captain Fantastic, nonetheless, is not about those fates. The film is about respect, or lack thereof. It is about the impossibility of respect in a world organized on layered assumptions of superiority, a world thus made by people proving each other’s assumptions right or wrong. A free ticket to narcissism and, all in all, lush douchebaggery.

Ben does succumb to the appeal of his own righteousness and does think that his ways are better than those of the world. And he often has a case. His kids have fully exercised and developed their potentialities as human beings; they speak six languages, have the bodies and resistance of a world-class athlete, have a perfectly well developed moral compass and thus a confident ethical position and firm principles, their critical thinking is penetrating and illuminating, their imaginations are full of meaning and their talents are developed in perfect alignment with themselves. They know not what competition means, what being better than the other is, and, more importantly, they need not to, as they have not developed one thing out of the pressure to outdo anyone around them. So, yes, Ben’s educational system seems to yield better results. But something’s out of place.

The kids aren’t entirely well-adjusted. Particularly the older men: Bodevan and Rellian (Nicholas Hamilton, “Strangerland”). This latter actually holds a growing feud with his father and is at the brink of rebellion. He’s a mutineer waiting for the right trigger to revolt. And his grandfather, Jack, does that right for him. Even when Ben bends, he’s still too stiff. He was with Leslie; he’s as well with his kids. Even when he graciously absorbs his father in-law’s punches, he’s willing to transgress his laws just to make his point. We saw him doing that during his stop at Aunt Harper and Uncle Dave’s house, as Ben is not able to follow the rules they’ve put in their own house, trespasses them and, to a great degree, disrespects them — despite the fact he was probably right.

And education, upbringing, raising others is what is at the helm of Captain Fantastic, and more particularly of Matt Ross’ balanced script. And a hard script to balance this is. It is through Ross’ wit and sense of compassion that no character ends up becoming a cartoonish version of themselves (even though they’re at the verge of it quite often) and none of the situations becomes too outlandish for us to follow — they are rather approached with humor, which only humanizes them further. The cast is also worth singling out for their work. Mortensen and Langella in specific are brilliant at either side of the patriarchal gamut. Two poles that hold the tension between each other with gut and poise and determined humanity (either for the good or for the bad).

What we have then is a constant diatribe on parenthood. The strongest assumption that most parents seem to hold dear in their hearts is that they know better what’s good for their kids. In the case of this world, the outside one in the film’s view, the one in which we live in, this arrogance is extensive to almost every corner of our society. Thus we hear Jack, grandfatherly but no less tyrannically, affirm pretty much since frame one: This is better for you, because we are better than you. Ben risks it all (literally) — and then is forced to reassess his point.

Thus in this other world, our world, biological fitness (the one Ben and Leslie’s brood display in every pore of their bodies, every word from their mouths spoken) has been turned into bureaucratic fitness. Social conventions are to decide who’s fit and unfit to survive in the real world, an increasingly enclosed artifact. Who’s an unfit kid. Who’s an unfit parent. Fitness is no longer an accomplished state that embeds all our capacities; it is rather a decision bestowed and certified by others who are, presumably, fitter than us. It is fitness by decree. Ability by law.

“Now in vessels which are in a state of mutiny and by sailors who are mutineers, how will the true pilot be regarded? Will he not be called by them a prater, a star-gazer, a good for nothing?” — Plato, “Republic, Book VI.”

Hippy. Tree-hugger. Good for nothing.

This is what’s so hard for Ben, trying not to be contemptuous on a ship of fools. But he polices habits just as well; he’s not too easy when it comes to control. This is where the Captain errs. Yet this is also where he genuinely rectifies as he sincerely recognizes his mistakes just at the very moment in which he realizes them. That is what, in the end, marks his character as worthy rather than smug: His self-awareness in a place where he has nothing to hide. He doesn’t lie to himself. He doesn’t lie. That’s perhaps the worthiest part of his education system. And we see that with each and every one of his six heirs. Each at their own helm.

For this world, though, the one we live in, Captain Fantastic has less hope. Instead of growing up in tolerance, intolerance is the only thing that grows — blatant bigots, parochial patrons of politeness parroting principles in the same way in which they mimic good manners. It is all a matter of customs. And costumes. Neither of which the captain is willing to acquire. Ships are never piloted by uniforms. Nor are they steered by habit. Ships never sail by law. For seas cannot be ruled any more than the stars or the moon in the sky. The captain’s command extends nowhere beyond himself. And that’s how the ship sails, keeps sailing — everywhere he goes. 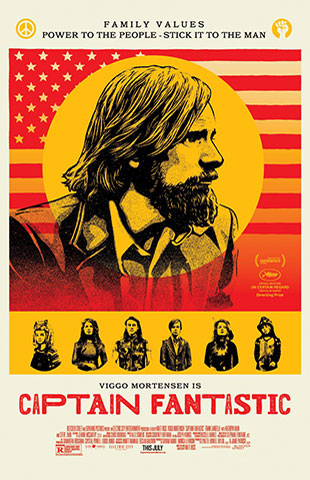