Like an American sprinter against Usain Bolt, Seth Rogen’s Sausage Party starts off quickly (and humorously), but it fails to win the gold medal due to the actor/writer’s problem of not knowing when to reel in the bizarre comic situations (a trait perhaps caused by his close association with pal Adam Sandler) and not push things over — WAY over in this case — the edge. Billed as the first “R” rated animated feature (hasn’t anyone ever heard of 1972’s “Fritz the Cat”?), the genre is definitely prime for satire and, for the first hour, Sausage Party (co-directed by Greg Tiernan, “Thomas & Friends,” and Conrad Vernon, “Madagascar 3: Europe’s Most Wanted”), it is often a hilarious exercise in just plain weird story-telling relating a plot of various grocery store products who come to life after the customers and employees leave (“Toy Story,” anyone?).

Of course, these items are segregated into their own “aisles” (ethic food, alcohol, cleaning products, etc.).

Rogen (“The Night Before”) is the voice of “Frank,” a hot dog who is friends with fellow wieners, Carl (voice of Jonah Hill, “The Wolf of Wall Street”) and Barry (voice of Michael Cera, “Juno”), among others. These foods are paired off with buns, naturally, and Brenda (voice of Kristen Wiig, “The Martian”) is Frank’s bun (the sexual metaphors hit with the subtleness of a nuclear attack, friends), while everyone waits to be purchased so they can go into the Great Beyond.

There is even a perky song explaining the plot (ala “Family Guy,” when it was funny).

Since the foodstuffs believe exiting the store only means a wonderful trip to Paradise, the experience of Honey Mustard (voice of Danny McBride, “30 Minutes or Less”) just might change everyone’s minds. This is confirmed when the hot dogs and buns are purchased by a woman who is known by the name Camille Toh (voice of Lauren Miller, “50/50”).

During this, when Honey Mustard decides to throw himself out of the cart, Frank and Brenda get tossed out with him (along with some funny stuff about other victuals “dying”). Meanwhile, Frank’s buds discover the horrifying truth — potatoes being peeled alive and boiled, vegetables are torn apart, nacho chips and cheese being microwaved and baby carrots being chewed to “death” (“They’re killing children,” one treat screams). Barry escapes that fate and escapes, only to run into a heroin addict (voice of James Franco, “Spring Breakers”), who can only communicate with him when he’s high, with hope of using him to get back “home” to the store.

All the while, Frank and Brenda run into Sammy Bagel Jr. (voice of Edward Norton, “Birdman,” doing his best Woody Allen), a Moslem flatbread named Lavash (voice of David Krumholtz, “Hail, Caesar”) and a lesbian taco, Teresa (voice of Selma Hayek, “Savages”), as they try to avoid a psychotic female douche (voice of Nick Kroll, “Knight of Cups”), who bulks up by drinking various beverages and alcoholic products.

So far, so good, or at least, fairly funny, especially how the “races” of the foods play off each other (for example, there’s German sauerkraut that wants to kill the Juice, an an Indian brand of firewater (Bill Hader, “Trainwreck”) that’s always half-baked, etc. But here is when things begin to go south. First of all, we see human characters actually being killed (decapitated, faces blown up) when the foodies revolt and set traps in the grocery store. These scenes are disturbing and even though filmmakers were trying to make the same gross-out comedy vibe of 2013’s “This is the End” (which itself crossed many barriers, but remained funny enough to succeed), it almost devolves into a bad “South Park” cartoon when all Matt Stone and Trey Parker can think of is a show about bowel movements and someone being shot in the head.

Then there is the conclusion of various food characters engaging in gay and straight sex, however, that pushes Sausage Party just a bit too far. After the initial humor (and shock) of these sequences wears off, it keeps going and going, leaving absolutely nothing to the imagination until we are just frankly bored with the whole thing (anal between the Jewish bagel and Middle Eastern lavash is more than offensive at this point and makes “The Brothers Grimsby” look like a Robert Altman film. Another restraint Rogen and the other writers — Ariel Shaffir, Kyle Hunter and long time Rogen collaborator Evan Goldberg — could have learned (but never seem to) is that no matter how MANY times the word “fuck” is uttered in a comedy film (especially an animated one), the less clever and funny it becomes.

Peppered with profanity, Sausage Party can bring about some decent early laughs, but it just becomes gratuitous after a while and loses any intelligence and fun the first part of the movie may have brought out. Overall, you will laugh out loud a few times, but once the film turns ugly, it gets really unattractive. 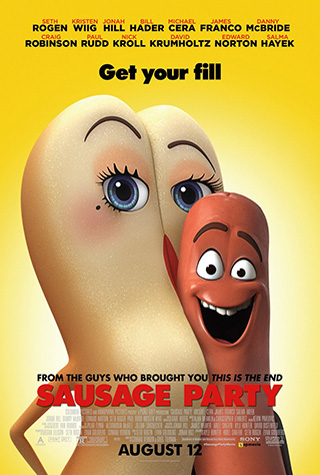