As a somewhat successful writer, I’ve become a firm believer that all work should be from the heart. Unfortunately, as a film critic, I’m stuck watching and reviewing movies where it’s painfully obvious that the filmmakers had an ambitious idea in mind, but not the slightest idea about the subject matter. What results is a fake, forced production, where the characters speak in clichés and make decisions that no one going through the situation would make. So I must thank my lucky stars that on September 28, 2011, at the height of my cynicism, I went into a preview screening of Jonathan Levine’s latest film, 50/50. Part stoner-comedy, part dramedy, the film is loosely based on screenwriter Will Reiser’s life, and, utilizing his superb script, it addresses the topics of life and death, love and heartbreak, frustration, acceptance, and, eventually, happiness, without once feeling contrived.

27-year-old Adam (Joseph Gordon-Levitt) doesn’t smoke or drink, waits for the crossing light, and exercises daily; he’d be the last person you’d suspect to die young. But when the writer of radio programs is diagnosed with a rare form of spinal cancer, his parents, best friend, and girlfriend must prepare themselves for the subsequent treatments, and fifty-fifty chance of survival. Upon hearing the news, Diane (Anjelica Huston), being the overprotective mother that she is, demands they live together, fully accepting the added responsibility of taking care of an ill son, in addition to his father, Richard (Serge Houde), who has Alzheimer’s. But, Adam’s significant other, Rachael (Bryce Dallas Howard), an independent artist, steps in and agrees to take care of him, putting aside their dampened sex life. That is, until his bud, Kyle (Seth Rogen) exposes her as a cheat, instead encouraging his pal to go out and enjoy his final hours in the company of other, more willing women. And, whilst in chemotherapy, Adam also befriends two older patients, Alan (Philip Baker Hall) and Mitch (Matt Frewer), who pass the time with the munching of weed-infused macaroons. With all that on his plate, it’s fortunate that Adam has Katherine (Anna Kendrick), a newbie therapist working towards her doctorate, to talk to.

Many of the jokes, which may or may not be funny in print, are brilliantly timed and executed. In fact, a lot of the humor has a tame PG-13 tone to it, which is what the film would’ve been rated, had the gratuitous f-bombs been omitted. In a wise turn, Reiser doesn’t focus on his protagonist’s illness as a focal point for comedy (only a handful of, rather tasteful, zingers directly mention cancer), instead much of the heart in 50/50 rests in the interplay between all onscreen personalities, all of which are fleshed out and enjoyable.

Levine finds a balance between comedy and drama. With too much of the former, the film would’ve lost its seriousness, still being hilarious, but losing its resonance. And had it been a shameless tearjerker, there’d be no reason to see it as it’d be another big-screen soap opera mockup. The genius behind this film is that it can be a downer for several scenes, with Adam questioning his life choices, and pondering about his mortality, spontaneously turn into a buddy-buddy romp, and then dab into a bit of romance, without ever feeling disconnected — everything flows together. Throughout 50/50, Reiser also wrote in a clever long-running metaphor where he compares Adam to an ancient volcano said to be growing weaker with time, but which abruptly explodes, proving that it’s actually becoming stronger. Smart writing like this is commendable in any script, but is even more admirable when it’s the author’s debut work.

As Adam, Gordon-Levitt gives a fantastic performance. His quiet presence directly reflects Adam’s numbness to reality — a common reaction to any fatal diagnosis. But, at the same time, as the film progresses, the actor doesn’t stay in this catatonic state, instead blossoming into a loveable lead who earns the audience’s sympathies.

Yet, despite his strength, Rogen is the real standout. Being the man-child that he is, it’s easy to dismiss the actor’s fine work. And, at face value, his character is the disgusting, selfish, sophomoric moron that you’ve come to expect the “Knocked Up” star to play. Surprisingly however, it’s revealed that Kyle, even in his drunkenness, only has Adam’s best interests at heart. Further investigation shows that Rogen wasn’t just hired because of his character’s distinct belief in the medicinal value of pot (although it might’ve been the final selling point), but for his personal relationship to the filmmakers; he was friends with Reiser during his cancer scare. So it becomes no mystery as to why the actor handles his lines with such conviction — he was the inspiration behind them!

Many films (most notably, Lifetime dramas) have used the “disease brings us together” template, but few told the story with the candidness of 50/50. It’s not only one of the year’s funniest, but also one of its most poignant. 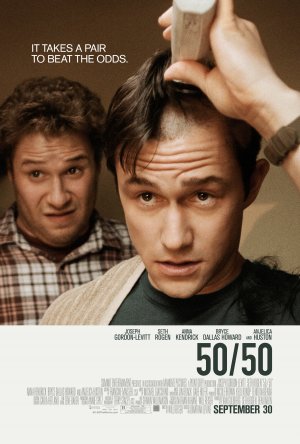