Yeah, I know. I’m late to the game — everyone one calling themselves a critic has seen and reported on Knocked Up already. Each and everyone one of them has seemingly given it rave reviews too. They also all gave shiny, glowing reviews to “Hostel: Part II” and we all know how wrong they got that one . . . don’t we? Therefore, I felt it was my obligation to tell you, even if it is belated, whether these people are actually telling the truth or just buying into the brouhaha.

And here it is. Knocked Up isn’t nearly as funny as all these folks are telling you. That by no means is saying that it isn’t a funny movie, it’s saying it should have been 100-times funnier. “But how can this be,” you ask, “Isn’t this written and directed by Judd Apatow, the guy who brought us the classic ‘The 40 Year Old Virgin’?” It most certainly is. He has undoubtedly come up with another concept that for all intents and purposes can be funny as fuck.

It’s a story about how two people on completely separate courses in life intersect with each other and ultimately try and meld those paths together. Ben Stone (Seth Rogen) is a perpetual frat-boy loser (putting it mildly) without a goddamn thing going for him. Alison Scott (Katherine Heigl) is a hot, up-and-coming Hollywood reporter for the E! Television network. Their paths cross at a local dance club when Alison and her sister Debbie (Leslie Mann) and Ben and his 4 uninspired friends (Jason Segel, Jay Baruchel, Jonah Hill and Martin Starr) run into each other. Add two parts alcohol, one part atmosphere and Ben becomes the lucky recipient of a good ‘ole banging. Strip away the luck when, eight weeks later, Alison calls to say she is pregnant. The “hilarity” ensues as these two incompatible people try and form a relationship.

I put the word hilarity in quotes because as I said before, Knocked Up doesn’t come close to reaching it’s full potential. I had fully expected the bulk of the humor to come from the differences between both characters as they found themselves mired in situations they had no control over. Or more importantly, in situations they absolutely had no desire to be in. And while there are a few moments of that (gynecologist visits, shopping for baby gear) there didn’t seem to be a lot of focus on the outstanding issue at hand — the pregnancy!

Most of the jokes were centered around the interactions of side characters; most notably Debbie and her husband Pete (Paul Rudd, “Reno 911!: Miami”). These two, stuck in a rocky marriage, provide the tit for tat, you’re a worthless asshole routine I expected from the stars of the movie. They’re so good at it, I was getting flashbacks of my wife barking incessantly at me. The only difference is I was able to laugh heartedly at their situation! The other jokes landed squarely on the tried and true college humor. Guys acting like four-year olds who like to smoke pot, drink heavily and lay around the house, all the while saying stupid shit at the most inopportune moments. I’ll admit that it is funny for a few scenes, but I found it wears thin rather quickly, just like the tires of an Indy car (good for a lap or two, then there needs to be a change).

All in all, even though Knocked Up doesn’t live up to the hype, it is still a decent comedy. And with all the horror, poorly directed dramas and glut of trilogies in theaters now, it’s just what the doctor ordered. I’ve warned you though, the laughs won’t come in droves but they will come. And all things considered, that’s all that really matters, isn’t it? 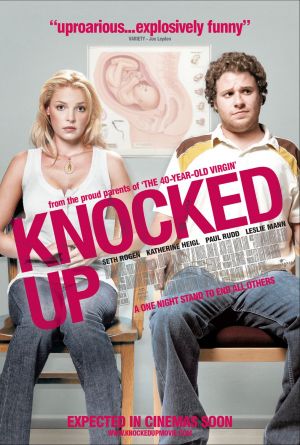