These are the first words of Into the Woods, Stephen Sondheim and James Lapine’s timeless 1987 musical production, and the last. Dangerous, familiar words that, in the real world, can strain our relationships with our dreams, our loved ones, and ourselves, and set us up for situations in which we can never truly feel satisfied. Each of the main characters of Into the Woods is based on a classic fairy tale character (or concept, in the case of The Narrator/Mysterious Man, originated here by Tom Aldredge) and employs a different twisted method of justifying the actions they undertake in order to achieve their personal goals.

A childless Baker (Chip Zien) who, along with his wife (Joanna Gleason) is following the instructions of a hilarious and cantankerous Witch (Bernadette Peters) to lift a curse and conceive a child, believes that “things are only what you need them for; all that matters is who needs them more.” His wife herself subscribes to a Machiavellian morality (which provides us with one of the play’s most enjoyable puns), thinking that everyone lies to everyone else, and all that really matters is the relative size of our deceptions. The Baker and the Baker’s Wife have no problem taking what they need (i.e., per the Witch’s instructions, a cow as white as milk, which belongs to Jack, a cape as red as blood, which belongs to Little Red Riding Hood, hair as yellow as corn, from Rapunzel, and a slipper as pure as gold, which is Cinderella’s) from those to whom those coveted things actually belong.

Little Red Riding Hood (Danielle Ferland) also takes from others, eating all of the treats she is supposed to bring to her Granny (Merle Louise, who also voices the Giantess and portrays Cinderella’s Mother) in the woods before being eaten herself by another taker, the Wolf (Robert Westenberg, who also plays Cinderella’s Prince). Cinderella (Kim Crosby), aside from her crippling self-consciousness, appears as one of the most morally balanced characters at the beginning of the play, though the most honest would have to be the Witch and The Narrator/Mysterious Man; in essence puppeteers who pop in to help or hurt the other characters as they please, but harbor no illusions of moral high ground. In complete contrast to these self-aware characters stands Cinderella’s Prince and Rapunzel’s Prince (Chuck Wagner), who relish their agony and compete against each other to determine who has suffered more on their quests for dramatic, life-changing love. 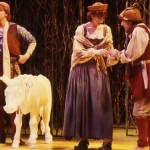 Perhaps the best and most enduring aspect of Into the Woods overall is the end of its first act. At this time, all of the characters have achieved exactly what they set out to at the beginning of the play. The Bakers have a child, Cinderella has escaped her father’s terrible house, the Witch is beautiful again, Little Red Riding Hood has defeated the Wolf, Jack and his mother are no longer completely impoverished. However, as anyone who has ever desired anything should know, this is still not enough, and the second act opens with the same exact cast of characters espousing a whole new set of desires, which end notably less well for each of them the second time around.

With the Disney adaptation of this play set to hit theaters on Christmas Day, it is definitely worth watching this original version, but not paying extra for the Blu-ray. It certainly does not contribute much in the way of clarity; faces and other details are frequently just as obscured as if you were in the audience in a fairly poor seat, and just as frequently so zoomed in that the overall effect of the stage is at best diluted and at worst lost. This is an understandable problem that tends to arise when viewing any filmed stage production; one always wishes they had been behind the camera at the time of the taping and able to control when and how the shots zoomed in and panned across the stage. For this play in particular, the biggest problems are in the first scenes of each act, where all the main characters inhabit their own scenes on the stage, all in a row, but the camera zooms in on each so tightly that it takes a moment to even realize they are all there at once, let alone discern their specific orientation.

These shots also take away from the effect of the conveyor belt on the stage that is best utilized during the scene where Little Red Riding Hood and the Wolf meet for the first time, and during a few moments featuring Jack’s (Ben Wright) cow, Milky White. Not only does the camera zoom in on their part of the stage, ignoring the rest, but its operator also chose to focus on these characters from the waist up, completely overlooking this unique technical detail. Zooming in this way is also extremely detrimental to the concept of perspective in scenes featuring the Giantess.

All in all a play about the nature of desire and our inherent inability to feel satisfaction (there will always be another wish, and, in its own sick way, even agony can be pleasurable), Into the Woods is clever, funny, moving, self-reflective, and timeless, all things that any broadway play should be. My fingers crossed for the film adaptation, because, as we’ve learned with many televised musicals, they do not always work out so well, but I wish . . . 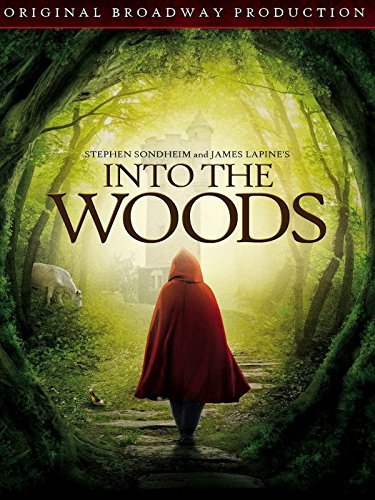