It is not hard to figure out where St. Vincent, the latest Bill Murray vehicle for comic grouchiness, is headed, but director Theodore Melfi makes you want to jump aboard and go along for the ride anyway. Murray isn’t exactly cuddly but, you know, every saint has some sinner-like traits. Murray, as Vincent, the next-door neighbor you love to hate, has flaws by the bucketful. He’s not only “Bad Santa,” he’s “Bad Scrooge.” A Vietnam veteran, he drinks, gambles, is heavily in debt, dislikes people much, is loud and rude, but there’s something about him that is unique and free from hypocrisy and it is hard not to love him, maybe because it may just be impossible not to love Bill Murray.

Murray also has the good fortune of being supported by an outstanding cast that includes comedienne Melissa McCarthy as a newly-divorced nurse in the middle of a custody battle, newcomer Jaeden Lieberher as a runt of a twelve-year-old named Oliver whose bond with Vincent is the heart of the film, and Naomi Watts as a pregnant Russian stripper, a bit of a stretch for Ms. Watts but she pulls it off (no, not her clothes). As St. Vincent begins, Vincent meets his new neighbor when her moving company carelessly backs their truck into his yard, destroying his fence and ripping part of the tree that grows in Brooklyn.

Though meeting the nasty new neighbor does not provide the welcoming that Maggie and her son Oliver quite expected, things brighten when the old man becomes a reluctant but respectably-paid baby-sitter. Vincent drops him off at Catholic School where Oliver tells the teacher, Brother Geraghty (a very funny Chris O’Dowd) with a straight face that he thinks he’s Jewish. When he is bullied because of his size, Vincent trains him how to break a bully’s nose which he soon puts into practice and, when he witnesses the boy being pushed around by bigger kids, Vincent threatens to do to their mothers what they are doing to him.

While Vincent is sincere in his desire to protect Oliver, he also wants to keep doing what he’s been doing. He takes him to the racetrack where they bet the trifecta and to hang out at the local bar while Maggie’s ex-husband secretly films them to collect information for his custody hearing. Needless to say, the information will not make a good impression on the judge. Though Vincent becomes almost a substitute father, he is still the same irresponsible person who has to fend off debt collectors such as the threatening Zucko (Terrence Howard). When Zucko confronts him in his house, Vincent suffers a stroke and it takes a lot of work and patience to bring him back to his old ornery self.

We get an inkling as to where the film is headed when Brother Geraghty asks his class to report on a modern day saint, people who have not been canonized by the church, but whose lives are making a difference. Oliver, though he is young, is able to see beyond outward appearances and notices qualities in Vincent others may have overlooked, such as the love he has shown to his wife Sandy (Donna Mitchell) who has been in the hospital for many years. Although the theme has been done before, it has not been done better. There are times where St. Vincent feels contrived, yet it is hard to resist its many touching moments and the warmth and love it radiates. 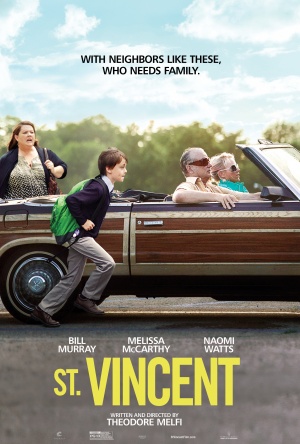