Observing, feeling, thinking, day dreaming, or simply throwing up your hands in exasperation. You may be engaged in all or none of the above when watching Terrence Malick’s (“Knight of Cups”) Song to Song, a dreamlike exploration of love and betrayal. Whatever does come up for you, however, and whether or not you have any idea where the film is going, the ride is never less than fascinating. Malick’s films will never be to everyone’s liking, yet like other directors whose work shattered boundaries and were not fully appreciated until after their death, the totality of his work may take time to fully assess.

Similar to Malick’s recent films “To the Wonder” and “Knight of Cups,” Song to Song is a film of mood, memories, and impressions that examines our disconnection from the sacred in our quest for sex, power, and money. Set in Malick’s old stomping grounds of Austin, Texas, the film opens as budding musicians, singer Faye (Rooney Mara, “Lion”) and songwriter BV (Ryan Gosling, “La La Land”) meet at a party thrown by high-living record producer Cook (Michael Fassbender, “The Light Between Oceans”), a man of considerable power in the industry who they look to for a foothold.

Faye and BV begin a relationship that is playfully erotic, and, in typical Malickian fashion, replete with voice-overs, whispering, introspection, and philosophizing. “I was desperate to feel something real. I wanted to be free the way he was,” Faye says and “Any experience was better than no experience,” a dubious proposition at best. BV teases her with such pronouncements as “Just tell me a complete lie. You can say anything you want to me. That’s the fun about me.” Seeking something “real,” she shows houses for a living — suburban homes and high rise apartments in Austin that become the background set for her romantic trysts.

Since Faye admits that she feels nothing and is open to various kinds of pleasures, she becomes involved with both BV and Cook, (a reality that takes BV a long time to discover) as well as taking part, albeit half-heartedly, in a lesbian affair with French artist Zoey (Bérénice Marlohe, “Skyfall”). When BV learns about Faye’s “betrayal,” he fends off his ex-wife Lykke’s (Lykke Li, “Tommy”) overtures and hooks up with the older Amanda (Cate Blanchett, “Cinderella”), who may remind him of his overbearing mother Judy (Linda Emond, “Julie & Julia”).

Cook meets and eventually marries Rhonda (Natalie Portman, “Jackie”) a waitress in a local coffee shop, but it doesn’t turn out well as Cook turns to prostitutes to maintain his freedom from the captivity of marriage. The film meanders from theme to theme and song to song in which Malick embraces the music scene in Austin in an eclectic soundtrack. Featured are the music of Patti Smith, Iggy Pop, Bob Dylan and Bob Marley as well as classical composers Maurice Ravel, Gustav Mahler, and Arvo Part. While the characters realize that their lives have been inauthentic, there is still little joy.

Malick depicts relationships in terms of fleeting moments that constantly move in and out of our consciousness, never quite tangible enough to grasp or provide satisfaction. Continually seeking their heart’s desire, the characters only slowly realize the emptiness of the promise. Underneath their search for connection, there is a spiritual longing that can be sensed but not understood. One character says that something is out there that is trying to find us, but the “something” remains obscure. While passion does exist in Malick’s visions of nature captured by cinematographer Emmanuel Lubezki (“Birdman”), and the film exudes grace in the Leonardo drawing of the Virgin Mary and the painting of the Madonna on a building wall, Song to Song brings us close to the edges of spirituality without fully trusting us to come to grips with something larger than ourselves. 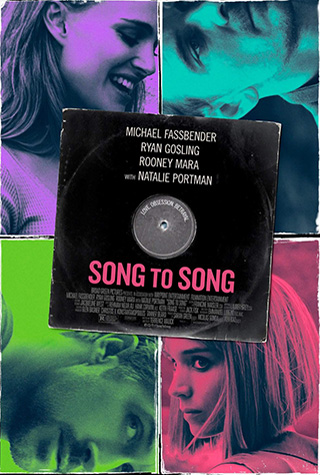