With a cut and a kick and an upbeat note, Damien Chazelle sure paints a pretty picture of classic Hollywood musical nostalgia, but La La Land is more plastic pastiche than poignant portrait. It’s a technical marvel that’s dramatically weightless, a boldly bravura effort from writer/director Damien Chazelle and his crew that’s also too cutesy and convinced of its own cleverness to emerge as more than sweet fluff singing hymns to the glory days of yesteryear.

The leads are infatuated artists struggling to make it in modern L.A. while clinging to the past. Mia (Emma Stone, “Irrational Man”) wants to be an actress and has the walls of her bedroom adorned with posters of classic movies, but struggles in the cutthroat world of auditions. Sebastian (Ryan Gosling, “The Nice Guys”) is a jazz pianist itching to run a specific nightclub that he’s obsessed with so he can keep classic jazz alive on his own terms, but he can’t even keep a steady job. They’re both dreamers about to cross paths and share a few bouncily choreographed musical numbers together.

So when La La Land goes all-in on Mia and Sebastian’s romance, it fizzles, partly because so much effort is made to define them as individuals with their own goals that their coupling feels like more of a Hollywood convenience than something that really means much to either person. Neither character is bettered by the other, nor made more interesting. They seem to be together simply because they’re the pretty people with something in common, an ambitious goal, and in Mia’s case, because her boyfriend seen early in the movie is a snobby snooze.

Despite this being their third movie playing a couple together (“Crazy Stupid Love” and “Gangster Squad,” the other two), Stone and Gosling don’t really have sparkling chemistry in what should be a rather romantic situation. They’re likable losers, easy to root and cheer for, but they don’t need each other and the movie’s insistence that it morph into some grand love story only further emphasizes how weak this aspect of the picture is. Direct “Casablanca” references don’t help matters.

La La Land loves to remind us that Mia and Sebastian are nostalgic for a time they never lived in, so the movie is, too. Its strength lies not in the past, though. It’s imbued with a very modern energy, derived from both its cast and a kinetic editing style that snaps the sequences together with crisp precision.

The choreography is equally impressive in certain group numbers where every movement from both leads and extras is finely tuned to maximize the camera’s spatial sensibilities. Beyond movement, the colors all pop, from costumes to sets, and Justin Hurwitz’s score is wonderful, better as a whole than any of the fine individual songs manage to be under the spotlight.

These elements are all superbly stunning, as if the movie is simply a showcase for Chazelle’s ambitiously gutsy confidence and his filtered-down influence on the other collaborative creative efforts. If that really was the case, that the movie was simply a display for such talents, it could work wonders, but a mediocre love story really throws a wrench in the plan.

It’s a strange problem for the movie to have because Chazelle increasingly embraces the romantic pairing until it completely consumes the experience. As much as La La Land is about Mia and Sebastian’s pursuit of their dreams, it’s arguably even more invested in their happily-ever-after possibilities together, which is what it hangs its emotional hat on. This will be a wise decision for anyone wrapped up in their love story, but a miscalculation for the rest of us who don’t care about Stone playing Stone charming Gosling playing Gosling.

So the movie moves me not, at least no more than getting my foot to twitch out a tap to the best and brightest moments of Hurwitz’s score. It’s still hard not to be awed by Chazelle’s expansive skill set and the strikingly on-point editing.

Chazelle’s last movie, “Whiplash,” had more thought-provoking things to say, better performances, and a more exhilarating knockout ending (although La La Land has a solid finish, too), but his latest is at least even more convincing proof that the young filmmaker dreams big and has the talent to back it up. La La Land is a light confection dancing deftly on a floor of flavorful flourishes, only to be stalled by a contrived coupling. Mia and Sebastian’s story can’t match the magnificence of Chazelle’s technique, but at least the bar is set high. 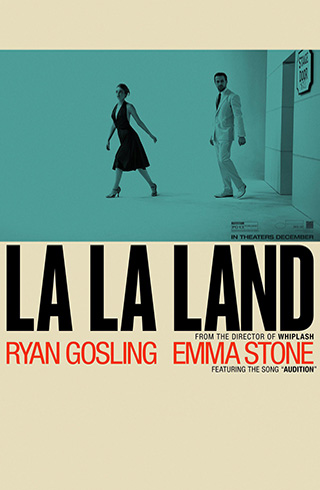