At fortysomething, Cal Weaver (Steve Carell) is living the American Dream. He has a nice house, a decent job, two loveable kids, and unlike most people, he’s married to his high school sweetheart, Emily (Julianne Moore). But that white picket fence is only as strong as those who built it, and in Weaver’s case, this “perfect” life begins to chip away when he learns that his wife has cheated on him with one of her co-workers, David Lindhagen (Kevin Bacon), and wants a divorce. Now, without much dating experience, Cal spends his time drinking his sorrows away at the local bar, where he attracts the attention of Jacob Palmer (Ryan Gosling). A handsome womanizer, Palmer’s modus operandi is to bed a new-woman-every-night and in an effort to help Cal cleanse his soul, the young lothario takes his counterpart on a crash course through smooth with expensive drinks and even pricier clothes. You now have the stupid in Crazy, Stupid, Love..

Crazy, however, is defined as “senseless and impractical.” In the film, the ridiculous is once again explored through several relationships. Namely through Weaver’s 13-year-old son, Robbie (Jonah Bobo), who is in love with his 17-year-old babysitter, Jessica (Analeigh Tipton). But besides the obvious age difference, the romance proves to be ill-fated when it’s revealed that Jessica has a crush of her own . . . on Robbie’s dad. Even stranger is when the resident player falls in love with Hannah (Emma Stone), a young lady who’s not quite taken by his charms, but who he can’t get off his mind. Though if there’s one person who embodies crazy, it’s Kate (Marisa Tomei), a recovering alcoholic, junior high teacher, and the first of many women allured by Cal’s new swagger.

As expected with most romantic comedies, the Glenn Ficarra and John Requa directed, Crazy, Stupid, Love. is predictable. As not expected with most romantic comedies, it also has a lot of heart and genuine tenderness. Dan Fogelman (“Tangled,” “Bolt,” “Fred Claus“), who wrote the script himself, makes the film identifiable for everyone — including men that may have been dragged out to see it. And there’s a reason why love is such a popular topic; it’s something that we can’t live with and certainly not without. It definitely has us make stupid choices, and at times, it makes us go a bit crazy. Come to think about it, love is abstract and can’t usually be explained in words, pictures, diagrams, or anything in-between, though somehow the writer aces it. 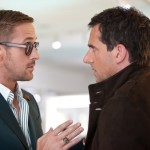 And as gooey as portions of the film (or the poetic explanations in the above paragraph) may seem, there are no add water-and-stir romances. Every cast member oozes believability and each character is likable in his or her own right. Once again, Fogelman nails characterization. His script does exceptionally well in handling Emily and not crucifying her for past mistakes. A great deal of care was placed in casting Moore and the always dependable actress delivers. Even Lindhagen, the man responsible for their divorce, has some redeeming qualities.

In easily one of his most marketable, Gosling’s performance reveals, for the first time, how funny he is. With roles in downers like “Blue Valentine” and “Half Nelson,” most people don’t associate him with comedy. However, the producers, in a surprise turn, were enticed by his natural effervescence, and decided that he was the right choice for a character as complex and rich as Jacob. The gamble worked and it turns out he was the sensible choice. And to capture his character’s arrogance, it’s reported that Ryan based his act off a TV show about pick-up artists and manuals on how to effortlessly pick up women. But how’d he bring the Cal/Jacob relationship to life? All Gosling had to do is act naturally — this is one thespian that has chemistry with whomever is on-screen.

Under-appreciated is Carell’s work. In one of the best performances of his career, the actor plays Cal flawlessly. Anyone who has been through heartbreak (and the depression that accompanies it) will surely be able to relate to his pain. And even when Weaver does make questionable decisions, one can’t say that he’s a bad guy, nor is he a terrible husband or a deadbeat father, in fact, many times, his problem is that he loves his family so much so that he can’t function without them. And speaking of Weaver’s family and unnoticed brilliance, Bobo, one of the youngest members of the cast, has a terrific scene in which he integrates David. Those who’ve ever dealt with single-parents meeting new lovers are sure to take Robbie’s side.

Although Ficarra and Requa’s direction isn’t noteworthy, Crazy, Stupid, Love. benefits from stellar writing. It’s not hard to imagine Fogelman writing the script, red wine in hand, reminiscing over a few past flames; his screenplay is one of the most personal of 2011. And even if it doesn’t break new ground, the film is a surprise hit that plucks just the right heart strings. 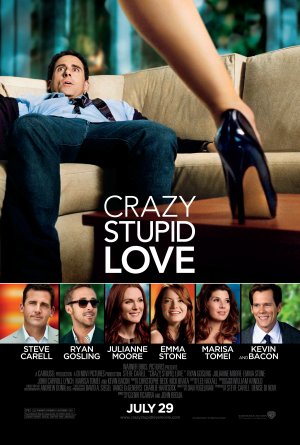