Anyone who has read my review for 2010’s misfire, “Jonah Hex,” knows that I love genre-mashing. I adore it especially if it’s something being meshed with a Western. Now imagine my glee when I heard Cowboys & Aliens being announced. Then came out that Daniel Craig, Harrison Ford, Sam Rockwell, Olivia Wilde, and Paul Dano were all slated to star, under the helm of “Iron Man” director, Jon Favreau, in this adaptation of the Scott Mitchell Rosenberg graphic novel, and I immediately called it “the dark horse hit of 2011.” I hate it when I’m wrong.

In this zany, intergalactic frontier, Jake Lonergan (Craig), a man charged with assault, arson, robbery, and the murder of a prostitute (whose picture is found beside him), wakes up in Arizonian Territory. Bloodied, stranded, and almost killed by a crew of low-life scalpers, he stumbles into the desert town of Absolution. With no recollection of what had brought him there (fortunately, he does remember the essentials for Western living — fisticuffs, sharpshooting, and horseback riding), Jake becomes the crux of a three-way battle. Attracting the attention of the town’s sheriff, John Taggart (Brian Duffy), a furious business tycoon and war veteran named Colonel Woodrow Dolarhyde (Ford), who would bet his right shoe that Lonergan stole gold from him, and a mysterious race of extraterrestrials (which look like they were templated from “Alien” but with bug-eyes) that are harvesting humans to study their weaknesses (including Dolarhyde’s cocky, disrespectful son, Percy, who is played by Dano). But when the monsters attack town, these folk put aside their differences to hunt them down and save their people. Thankfully, Lonergan has been equipped with a metal bracelet, which isn’t just stylish but also a complex example of alien weaponry. Also on the road to glory are Doc (Rockwell), whose wife was captured in the invasion, and Ella Swenson (Wilde), a Southern Belle who pesters Lonergan about his past while hiding secrets of her own.

That’s all fine and dandy for a film that the writers describe as “Unforgiven” with aliens landing,” but the problem is you can’t sympathize with any of the characters. To add insult to injury, they aren’t very memorable either. Fortunately, the men and women that play them are likeable. In example, because of his immediate cool factor (and distinct resemble to Yul Brynner in “The Magnificent Seven”), Craig, in many regards, makes his underwritten role into a somewhat enjoyable protagonist. Ford too, despite being stern-faced and obnoxious, is redeemed by the fact that we, the moviegoers, know that beneath that gruff exterior, ol’ Harris is a nice guy. Wilde, the film’s vixen, also benefits from both her notoriety and beauty (no man can ignore those eyes). Not to discredit her credentials (her on-going performances on “House M.D.” show that she’s not only easy on the eyes but also has a firm grasp on acting), it’s just that she, like her co-stars, was paid to act out a piss-poor screenplay.

The two knuckleheads that mentioned Cowboys & Aliens in the same reign as Clint Eastwood’s 1992 classic are Roberto Orci and Alex Kurtzman. They worked with four other “professionals” (Damon Lindelof, Mark Fergus, Hawk Ostby, and Steve Oedekerk) to adapt the eponymous 100-page source material. The end result is a film that can’t decide whether it wants to be a schlocky comedy, action-adventure, or horror. These abrupt tonal switches are extremely distracting. And if that doesn’t push you away from the story, its lack of cohesion will. Anyone interested in seeing the film is recommended to leave logic at the door because attempting to follow some of the more ludicrous twists-and-turns will only result in a migraine (particularly one in the second act that must’ve blew out a couple hundreds of my neurons).

Granted, the source material doesn’t seem revolutionary (or smart for that matter, but I haven’t read it), but like many who anticipated Favreau’s follow-up to the lukewarm “Iron Man 2,” I was enticed by the title’s campiness: It’s straightforward and humorous. And I, like many of the audience members that shared my screening, was disappointed. Had the writers amped up the film’s so-bad-it’s-good appeal and focused in on the premise’s ridiculousness and action sequences (it is a summer blockbuster after all), they could’ve had an entertaining and (intentionally) mindless indulgence (because as important as fleshed-out characters are, nothing beats watching what “Close Encounters of a Third Kind” could’ve been had it been set in the 1870s). Instead they try too hard to be funny, (at times) cute, and accessible. Though admittedly, the shootouts that Cowboys & Aliens does have are much-needed (albeit short) refreshers from the film’s overall mediocrity.

So far in, Favreau has been losing an uphill battle. Even with a PG-13 rating, the help of producers Ron Howard, Brian Grazer, and Steven Spielberg, a handful of big-names, and his extensive campaigning, it’s predicted that Cowboys & Aliens will only make back $40 million of its $163 million budget. In the cutthroat world of Hollywood, it’s miscalculations like these that cost talented filmmakers their careers. And with independent sci-fi thrillers like “Attack the Block” garnering international acclaim, the question arises: Could the film have benefited from tighter restraints? Perhaps, as westerns in their nature tend to thrive off their gritty appearance. But even if it wouldn’t have made an exponential improvement, the film wouldn’t be considered the belly-flop it is today. Then again, this might be a sign that audiences want more introspective cinema. Wait, “Transformers: Dark of the Moon” made how much? $326 million? Scratch that. 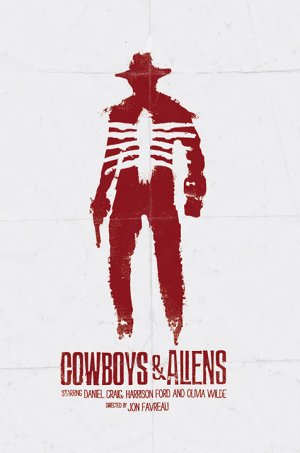