The title, GoatSucker, may sound like a disturbingly niche adult movie, but it actually refers to the Puerto Rican myth of El Chupacabra, a bear-like carnivore believed to feed on livestock and humans. Made in 2009, this seminal monster movie is brought to the small screen by Steve Hudgins, who most recently authored the woeful mystery thriller “It Lives in the Attic.”

An amusingly cheesy promo video introduces us to Hidden Valley Hiking Tours, an amateur organization offering trips into the deep woods to track down the mysterious Goatsucker. A motley crew prepares to hit the trail; and kudos to Hudgins for preloading each with a contrived backstory. There’s Alan (Brandon Schaefer, “Postpartum”), a young man on his first hiking tour; and it just so happens that his ex, Rhonda (Emily Fitzmaurice), has turned up, too. Lusting after Rhonda is loser Eugene (Neil Vowels, “The Caretakers”). Equally lustful — for Alan, specifically — is Pam (Marsha Cash, “The 3rd Floor”), an older lady who’s jealous of Rhonda’s youth. And there’s Wayne (Randy Hardesty, “The Creepy Doll”), hired by Pam’s husband to take snaps of her adulterous behavior. None of this makes sense on screen, either.

Their nonchalant driver Brad (Jack Jones, “The Bottom Line”) brings the group to the woods, where they meet Heidi (Kim Welsh, “Widow”), a reluctant guide who’s forced to take the tour by her flamboyantly angry boss, Mr. Walters (Tom Dolan, “Maniac on the Loose”). On the pointless subplot front, a young woman named Cassy (Amanda Stone) is making a separate expedition to avenge the death of her boyfriend, whom she believes was killed by the Goatsucker a year ago. She threatens everyone she meets with a gun, although no one seems to notice that it pops like a potato spitter.

Obviously, the creature hunts the hapless wanderers down, one-by-one. Perhaps their only hope is Huck (Hudgins himself), a lone wolf and de facto park ranger who wields a knife that would make Crocodile Dundee blush. But even if the Goatsucker itself doesn’t kill them, the hikers may end up killing each other: Their unlikely interrelations are a recipe for rampant rivalry.

That the whole cast of GoatSucker appears to be in on the joke helps hold the viewer’s attention. I particularly enjoyed the camp energy of Dolan as tour boss Mr. Walters. There’s a legitimately good bit where he employs an actor to play a scientist confirming the truth of the Goatsucker’s existence, and there is almost something to say here about the marketing and monetization of urban (or indeed rural) legends in a post-“Blair Witch” world.

But Hudgins is more interested in focusing on the hiking group, finding reasons for them to split up and get munched. Owing to the back garden budget, the deaths mostly involve monster point of view shots zooming toward startled victims, then the discovery of some bloody clothes after the event. Unfortunately, Hudgins missed a trick by failing to add a filter to the monster’s viewpoint — it’s not always clear when we’re looking through beast-eyes.

To say that Hudgins’ grasp of filmmaking craft is rudimentary would be an overstatement. There’s little evidence of any knowledge of film language, let alone a unique voice. He suffers from a terrible case of locked-in syndrome, meaning the characters seem forever unable to view anything beyond the frame (a tendency rife in the horror genre, to be fair). On the editing side, there is no sense of moment-to-moment tension; the Goatsucker basically just interrupts normal human conversations every now and again.

Along with the editing (hack ‘n’ slash), music (crash ‘n’ drums) and cinematography (point ‘n’ shoot), Hudgins is also responsible for the script. As mentioned, his tapestry of characters is preposterously interwoven from the start, which does at least rescue us from leaden introductions. With tongue lodged firmly in cheek, dumb juvenile humor abounds. Cassy threatens to blow off Brad’s “goat and shrimp” unless he takes her to the woods. And when Rhonda says to Eugene, “It must be hard,” he’s sure that she’s talking about his penis! The LOLs are almost palpable. The story itself certainly ends unpredictably, but only because the final twist is a cheat.

Tame and camp and all practical, and with no naturalistic intent whatsoever, GoatSucker has more in common with 1950s creature features than modern horror. It’s shot like a home video behind Old Man Johnson’s Farm, on a budget which extends no further than ketchup, so expectations should be tempered accordingly. But even within those parameters, it’s bad enough (and brief enough) to be watchable. In fact, I’m beginning to wonder if Steve Hudgins might be the Tommy Wiseau of horror. 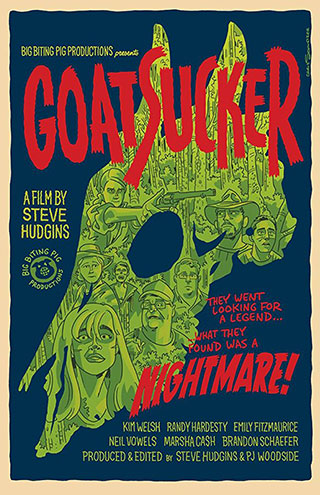