After two heralded breezy and finger-snapping editions, the sassy songbirds of the Barden Bellas are back for a supposedly final installment, and sad to say it is not a charm the third time around in the lame, toe-tapping Pitch Perfect 3. In 2012 movie audience giddily fell for the vocalizing vixens of “Pitch Perfect” making household names out of lead performer Anna Kendrick and puffy breakout star Rebel Wilson. “Pitch Perfect 2” glommed onto the its predecessor’s surprise delight taking the college a capella competition international with passable results.

For Pitch Perfect 3, director Trish Sie (“Step Up All In”) manages to serve up a slight, concocted story that would not even rival a forgettable “American Idol” rerun from a handful of years ago. Other than posing as a vanity piece for music mastermind DJ Khaled’s profile and capitalizing on the current pop cultural impact of network TV singing reality shows such as NBC’s highly-touted “The Voice” there is not much passion in reaching the high-pitched notes that belabor this noisy encore. Even the most ardent fans of the film franchise will tire of the convoluted return of the Bellas as we find the adventurous singers reuniting after their beloved nostalgic college days (but at least we learn they graduated).

To start, leading lass Beca (Kendrick, “The Accountant”) decides to leave her record label as a fledgling music producer. Interestingly, she still has a close bond with her fellow Bellas mates Fat Amy (Wilson, “How to be Single”) and Chloe (Brittany Snow, “Hairspray”) — all sharing a place in New York City. The trio has not experienced much enlightenment after their carefree competitive singing days in college.

When the opportunity presents itself for the girls to get together for a performance falls flat, it is Aubrey (Anna Camp, “Brave New Jersey”) that suggests the gals take a trip to Europe to join the USO tour and sing to entertain the American troops. And since the women have nothing special going on in their lives in the “real world,” Beca and her crew get back into the thick of things as they engage in squaring off with other rival bands in song competitions. The so-called incentive for partaking in the “battle-of-the-bands” contest is to become the main opening act for DJ Khaled during his tour. There is certainly nothing like sweetening the pot to revive a hopeful singing career than hitching your wagon to a Southern-style rapper . . . at least that’s what screenwriters Mike White (“Brad’s Status”) and Kay Cannon (both previous “Pitch Perfect” movies) seem to think.

There is something to be said about the professional malaise of young women feeling the aches and pains of unfulfilled expectations, especially in the age of fragile female empowerment and the arrival of the #MeToo Movement. However, Pitch Perfect 3 never challenges any of its vacuous material as it clumsily hangs on to the same confines of the once-festive sing-a-long face-offs that were effectively punchy and inspired in the preceding films. Now, the gimmick seems forced and pointless. The showdowns between the Bellas and their current agitators — the main being the female band Evermoist led by Calamity (Ruby Rose, “John Wick: Chapter 2”) — relentlessly drags in familiarity. The selection of songs are minimal and derivative at best.

The meager subplots involving the Bellas’ interaction with random hot guys (most notably Matt Lanter, “Vampires Suck” and Troy Ian Hall) is woefully inconsequential and sophomoric. The only consistent element that remains somewhat intriguing and witty are the lingering daddy issues that plague both Kendrick’s Beca and Wilson’s Fat Amy. Veteran actor John Lithgow (“Beatriz at Dinner”) is the only true bright spot as Fergus, Fat Amy’s deplorable dad whose unctuous presence is somewhat of a guilty pleasure to watch. Still, that is not saying much, but his insufferable characterization is comparatively winning when measured against the other numbing, persistent nonsense. 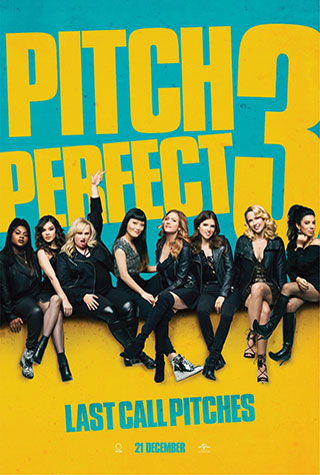