In the current stressful climate of cautious people keeping their safe distance from one another because of a crippling pandemic, it is bewildering to think an off-the-wall, road trip sex comedy involving mismatched personalities would suffice to ease the blues of quarantine. Nonetheless, co-writer/director Nico Raineau’s loose-minded sex farce, Hooking Up, looks to do just that. Although inspired in its ambitious lunacy, his film’s sketchy foray into the complicated realm of sex addiction and the mending of some broken psychological fences feels so thoroughly out of step.

Raineau — along with fellow scribe Lauren Schacher — pens this contrived dramedy with all the creative titillation of a diaper rash. Transparently raunchy and stretched out for cheapened chuckles, Hooking Up yearns to be strident in its running gag involving Darla (Brittany Snow, “Pitch Perfect 3”), a magazine sex columnist who is hopelessly addicted to the very same hot subject matter she is paid to write about. In fact, Darla is so wrapped up in her sex-addiction that we are shown just how deep her affliction is — the opening moments has the lusty Darla uncontrollably bonking the stuffing out of her sex-addiction support group classroom leader . . . and this is just before their meeting is conducted. Indeed, Darla is an undisciplined mess and her wild-minded whims are just as toxic as her crass demeanor. In short, Darla has no filter whatsoever.

As imagined in contrived sitcom land fashion, a disillusioned outsider named Bailey (Sam Richardson, “Office Christmas Party”) accidentally wanders into the wrong group meeting that just so happens to include the uncouth Darla. Bailey is a testicular cancer survivor and is trying to cope with the rejection from his childhood sweetheart. However, wandering into the wrong support group may prove to be just what the teddy-bearish Bailey needed as he manages to strike up a distinctive rapport with the edgy, carnal-craving Darla. Together, this unlikely duo will embark on a sordid adventure as they hit the traveled roadways in an effort to figure out the things that have unraveled for them.

For Darla, she has reached her ultimate limit when her glossy magazine editor Tanya (Jordana Brewster, “Furious 7”) had fired her on the spot for holding sexual dalliances with a co-worker. Somehow, Darla is convinced that by hopping from place to place (particularly where she participated in some of her memorable, juicy sexual exploits) it may rectify some of her nostalgic naughtiness and give legitimacy to her developing blog entitled Sex Drive (how clever, huh?). In terms of Bailey, he is offered a chance to try and cope with his returning cancer diagnosis while in the company of a bed-hopping blonde companion known for having more than her share of a good time sexually. Plus, Bailey is hoping that the presence of decadent Darla could work to his advantage and, through the right set of circumstances, help him win back his dismissive woman’s heart. Overall, the film asks the audience to buy into the silliness, seediness, and sympathies of this defeated tandem who are trying so desperately to grasp at redemption through an ill-advised road-trip.

Can Darla get back in the good graces of Tanya and salvage her sexual writing career without playing victim to her overwhelming sex addiction? Will Bailey convince his true love that he is a complete man despite his cancerous manhood at stake? Are Darla and Bailey the living proof that complete opposites can attract and share a common goal in both loneliness and acceptance?

Tediously realized, Hooking Up does somewhat benefit from the off-the-cuff, high-spirited performances from both Snow and Richardson. The tired premise of the uncontrollable sexpot and her sickly travel companion could have been more enjoyable had the follow-the-dots material been more challenging for them, however. The whole contrasting of lost personalities through the arbitrary avenues of rudimentary self-discovery is something of an overplayed hand that ultimately feels monotonous and manipulative. Perhaps Darla and Bailey needed to be quarantined in favor of taking this cheeky R-rated joyride to nowhere. 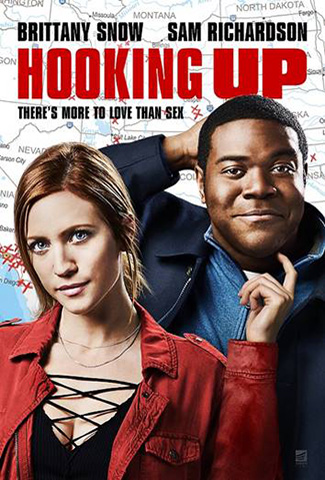