Gone are the days of 1970s-style “Jiggle TV” . . . you know, that endearing media term reserved for the boob-tube, pop-cultural guilty pleasure that the late mega-television producer Aaron Spelling eagerly supplied to prime time viewers? With it, the ABC network struck a goldmine with the curvy, cops-turned-private investigators from the Townsend Agency in the highly popular 1976-1981 series “Charlie’s Angels.” The phenomenon was infectious nationwide to the point that the honeys with holsters became larger than life. For those that lived through (or can remember) the “Charlie’s Angels” euphoria that catapulted these small-screen sirens to super-stardom can certainly understand the nostalgic interest in bringing this series to the big screen. Again.

Well, in the aftermath of the irreverent and spry Drew Barrymore/Cameron Diaz/Lucy Liu installments (and a failed short-lived updated series), there is a whole new spin to the “Charlie’s Angels” franchise that some may find refreshingly acceptable. No longer does this property have the stamp of masculine-influenced creativity from yesteryear. Now that we are firmly in the 21st century, writer/director/co-star/co-producer Elizabeth Banks has the final say as to how her version of Charlie’s Angels will soar at the box office. It is quite liberating to see Banks infuse her crop of crime-fighting cuties with a feminist sensibility while holding on to the sensualness that made the butt-kicking beauties such a sensation over four decades ago. However, the so-called new and improved take feels like it is trying to flesh out its synthetic soul in an erratic, female empowerment blender of rambunctiousness that is all too familiar.

Enthusiastically, Banks does what she can to breathe some flash and excitement into this latest offering, proving that it is not solely the boy’s club that can muster up the popcorn action-packed exuberance for mindless entertainment. There is no shortage of Angels high jinks to be had: Roaming around to lavish locales, donning suggestive outfits and disguises, attending swanky functions, tinkering with explosive gun-play, besting the baddies in elaborate setpieces, among others. Also, the casting of the Angels is quite curious but rather interesting. The usually stoic Kristen Stewart (“Personal Shopper”) is joined by newcomers Naomi Scott (“Aladdin”) and Ella Balinska (“The Athena” TV series) to form the newest trio of Angels out to save the world with their brand of beauty, brains, and brawn.

Sabina Wilson (Stewart) and Jane Kano (Balinska) are employed by the Townsend Agency, an enormous organization that has now expanded globally courtesy of its thriving operations. In fact, the agency has provided its share of Bosley overseers to cater to the women and their dangerous assignments. While Banks assumes the role of a Bosley rep for our heroines, other Bosley prototypes in the film include Djimon Hounsou (“King Arthur: Legend of the Sword”) and former “Star Trek: The Next Generation” head honcho Patrick Stewart as a retiree. Elena Houghlin (Scott) is the network’s whistle-blower whose hook-up with Sabina and Jane is for both protective interests and as an apprentice to earn her lawful Angel wings.

Unfortunately, Banks’ scattershot script tries to play it too cute with the so-called subplot involving the Calisto Project that plays a vital part in the world’s energy resources, in which Elena finds herself tangled up in. Additionally, the Angels must contend with some strained colorful bad guys that — for the sake of argument — come off as low-grade James Bond villains. On-board for the villainous messiness is the wealthy weasel Jonny Smith (Chris Pang, “Crazy Rich Asians”), unctuous bigshot Peter Fleming (Nat Faxon, “The Way Way Back”), and their stone-cold executioner Hodak (Jonathan Tucker, “Hostage”). The violence between all is cartoonish and amped up a bit, and this version of Angels tries to downplay the skin-tight antics through a perceived feminist angle though this overstuffed showcase only mildly succeeds on that end.

Stewart and Balinska teasingly clash from time to time and outsider Scott has a good time as the computer brainiac looking to belong to something nutty and adventurous. Thankfully, these galloping gals are not a carbon copy of the Angel wannabes from yesteryear. Nevertheless, the unimaginative titled Charlie’s Angels does not present anything uniquely new to the titillating table of creativity. This toothless, jittery jet-setting flick is more of the same serving of high-flying silliness despite its misguided sisterhood slant of patchy intrigue. 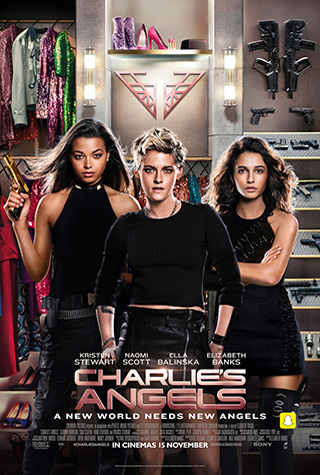