The war began peacefully. In 2012, university students and others launched peaceful protests against the regime of Bashar-al-Assad whose government had been in power since 1971 and had failed to institute promised reforms. When government soldiers fired on demonstrators and killed children who painted posters against the regime, the protests escalated into an armed rebellion. Since 2012, an estimated 400,000 Syrians have been killed, more than one million injured, and over 12 million displaced from their homes. After seven years of what is in part a civil war, a religious war between Shiite and Sunni groups, a fight against Islamic militants, and a power struggle between major powers, there is no end in sight.

Directed by 26-year-old journalist Waad al-Kateab and British filmmaker Edward Watts, the documentary For Sama is a gift made by Waad to her young daughter Sama, born during the revolution. Winner of Best Documentary at Cannes, the film chronicles the genocidal siege that took place in the city of Aleppo between 2012 and 2016 carried out by the Assad government with the support of the Russians. Shot by one who not only witnessed it but also experienced it, it is a harrowing film that is hard to watch, but one that testifies to the dedication, resiliency, and courage of those who remained and attempted to carry on with their lives.

al-Kateab said, “I felt a great burden of responsibility to the city, its people and to our friends to tell their stories properly so they will never be forgotten and no one can ever distort the truth of what we lived through.” The film is not presented in chronological order but weaves backwards and forwards in time. According to co-director Ed Watts, “The flashback allowed us to move between the light and the dark, which is much closer to the truth. That’s what Waad was saying: Even in the dark times, there was all this humor, love, and affection. That flashback structure allowed us to reflect that more truthfully as a piece of cinema.”

The initial protest, coming soon after the “Arab Spring,” was filled with enthusiasm and promise, but it was a hope that was soon dashed by the government’s determination to eliminate any pockets of resistance in the country by any means necessary including the use of chlorine gas. When more than 40 bodies of those opposing the government show up in the river, the struggle takes on a sense of urgency. Waad and her husband Hamza, a doctor, support the resistance to the constant shelling by government troops and bombing by the Russians, maintaining the only hospital left in Aleppo after eight of nine were bombed. In a memorable scene that only hints at the toll the war took on children, a young boy displays cut-out portraits of friends who have left the city, later adding those who stayed and lost their lives.

The film does not hide or try to spare us from the destruction and chaos or from the often losing struggle to stay alive. We hear the bombs exploding with a ferocity that will tear your soul. We see people running and hiding, and witness the aftermath of weeping or silence. Hamza and his friends establish a hospital to provide medical services after some of their friends are killed or wounded in the bombing. In an amazing scene, a doctor tries everything to bring an apparently stillborn baby into life — shaking, slapping, massaging the infant until a heart-stopping breakthrough occurs and the tears are not those of grief but of joy. Even after their hospital is hit by bombs, Waad and Hamza refuse to give up hope and vow to remain to assist those still in Aleppo and to continue the struggle for freedom.

In the midst of war, Waad and Hamza rejoice in the birth of little Sama, but there will be a time when Waad will regret bringing Sama into the world. For Sama digs deep to show us the human element behind news reports of terrorists, suicide bombers, and chemical warfare. The documentary is not only a journal of war but also one of love. Watts sums up his goal in directing the film. “It’s all about trying to use storytelling to help this world of ours,” he says, “to get in touch with reality, to get in touch with truth, and you know what? To start actually believing in human beings again, which I think is what you get out of Waad’s story. So often, we’re told that human beings are dark and that we can’t do it and we’re all doomed – we need to start believing in ourselves again and believing that we can make things better.”

For Sama may help to make that happen. 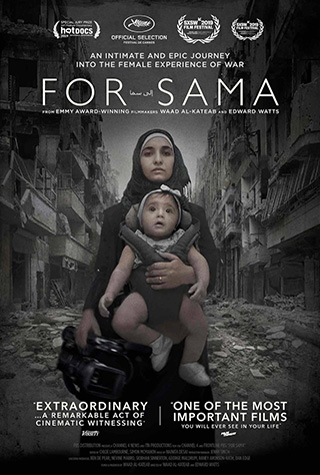