The critics haven’t been kind to the movie Isabelle thus far, but I wouldn’t go as far as to hurl the vitriol they are spewing. It isn’t a bad movie, it is a mediocre movie, mainly because it is batting in a field that has horror films like “The Babadook” and “Hereditary” in it — all dealing with the similar themes of grief, loss and motherhood. This means that the whatever is going on should be in service of these themes, and not overwhelm the plot to the point of incoherence. And that is precisely where this movie messes up, because we get horror for the sake of horror, and an ending that stunned me — but not in a good way.

We meet new couple Larissa (Amanda Crew, “Jobs”) and Matt (Adam Brody, “Ready Or Not”) moving into their new house. Larissa is also pregnant with their first child, a fact that Matt doesn’t seem very keen on. Does it have to do with his mom leaving, or feelings of uncertainty that come with the change to the status quo of their coupledom? Perhaps. Despite his mother’s abandonment, Matt has done very well for himself, putting himself through law school and working in a law firm — there really isn’t much focus on his work so I am not sure what exactly he does. There is an overly-friendly secretary, which I completely expected to develop into something, but never does, leaving me to wonder why this was highlighted.

Larissa, on the other hand, seems subsumed into a state of waiting for her child to be born. She is a music teacher, which is referenced at the beginning when she plays the piano the day they move in, and later on when Matt mentions music students. All is fine and dandy for the couple, until they have sex and she goes into labor while getting the mail. We’re not sure if there was something wrong before that, or if Isabelle, their wheelchair bound neighbor next door who stares creepily through the window, is the one responsible. They lose the baby, Larissa is dead for a minute (as the movie emphasizes to us consistently) and Matt is warned that he might start glimpsing changes in his wife. I wouldn’t think that medical personnel would run around telling patients this, especially since they probably have had people flatline before and then come back from it.

As Larissa’s mood changes erratically, it feels like postpartum depression, but of course compounded because she has lost the child. What I don’t understand is how Matt can leave her alone and go back to work. She is on medication, has a history of mental illness, and their baby is gone — how does it make sense to let her linger about the house by herself? It definitely felt like a commentary on the lack of awareness of this condition, since both Matt and a priest he found at the hospital thinks she is possessed. To that end, there are a few horrifying sequences of Larissa experiencing delusions, imagining that she hears their child, thinking that she is holding their child when it is just a stuffed toy.

This is where the spooky plotline kicks in, which in turn sends the movie off the rails. Larissa’s sister Jessica (Krista Bridges, “Knuckleball”) comes to visit and takes her to see some spiritual guy Pedro (Michael Miranda, “Georgetown”), who warns her of a malevolent spirit who wants to take over her life. He tells her to be careful and not to let the spirit in, but then sends her on her merry way. The sister also leaves after that. This doesn’t make sense to me. Again, why is Larissa so isolated and continually left alone? If a guy that I trusted warned my sister about some spirit that was trying to possess her, I would never leave her side and help in any way possible.

After the visit to Pedro, the haunting begins with a fervor. Some of the jump scares are quite unnerving, and I like that some scenes are in broad daylight, yet I felt most uneasy and disturbed by Isabelle’s presence. Zoë Belkin (“Carrie”) is good as Isabelle, but her back story is limited to Satanic rituals and a mother whose role I don’t really understand. She envies Larissa and the life that she has, and is angry that she is wasting it.

This reflects poor insight on mental health struggles, where individuals are judged for not appreciating the life that they have, as if it is within their agency to completely turn it around. Larissa needs support and empathy, not a husband she has to convince not to divorce her because he cannot handle the scenario anymore. I can understand Matt’s frustrations, and I recognize that his desire for normalcy is a way for him to compartmentalize, but he offers very little compassion for his wife.

Then we reach the ending, which, let’s just say, is a total cop-out and makes everything prior to it a waste. Crew and Brody are good actors and have the ability to flesh out deeper characters, if only they were given the opportunity. Like I mentioned earlier, some of the horror sequences are well done, with some interesting visuals as well, but it is in the handling of grief and mental illness that the movie stumbles. There doesn’t seem to be the understanding that the abyss is not something a person can crawl out of with a simple snap of the fingers. Maybe it is reflective of how we as society still struggle with our comprehension of mental health. If so, the message doesn’t come across acutely, resulting in a movie that is structurally messy and one that ends up missing the mark. 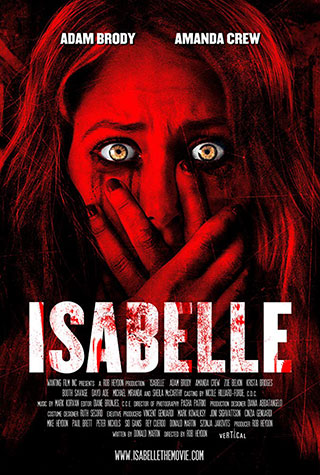