First-time director Paul Dalio’s Touched with Fire, originally titled “Mania Days,” is an honest attempt to provide insight into the illness commonly known as bipolar disorder. The film depicts how two young poets are compelled to battle parents, doctors, and the cultural consensus to maintain their relationship which is considered dangerous by the community because of their illness. The film stars Katie Holmes (“Woman in Gold”) as Carla, a published poet and Luke Kirby (“Empire of Dirt”) as Marco, also a poet whose rap-oriented artistry is often shared at poetry slams. After she meets with an unresponsive audience at one of her poetry readings, a frustrated and depressed Carla implores her mother Sara (Christine Lahti, “Obsessed”) to tell her about the origin of her disease.

Told by her mother only to take her medications and talk to her doctor, Carla signs herself into a psychiatric hospital in an attempt to read her medical records. It is there she meets Marco who is committed after displaying signs of delusions, claiming to be from another planet and predicting the apocalypse is about to happen. The incident occurs after his father, George (Griffin Dunne, “Dallas Buyers Club”) visits his apartment where he sees books strewn all over the floor, the heat turned off because bills were not paid, and Marco refusing to take his meds, convinced that they would stifle his creativity.

The two poets meet at a group therapy session and, after some predictable initial antagonism, they develop a relationship, meeting together regularly in the middle of the night. Their budding relationship, however, only seems to increase the frequency of their manic episodes and causes their families consternation. Over the protests of their parents, Marco and Carla continue their relationship when they are released from the hospital, but things get more complicated when Carla becomes pregnant and Marco still refuses to take his medication. In a cameo that feels somewhat out of place, Marco and Carla visit clinical psychologist Kay Redfield Jamison, the author of the book “Touched with Fire” who strongly suggests the advisability of their taking their prescribed medications, reassuring them that it will not affect their creative impulses.

The main thrust of the film, however, seems to offer a contradictory message. It shows the two lovers acting with exuberance as they jump into public water fountains, break into empty apartments, read each others poetry, and try to escape the police by driving their car into the water and swimming to the shore. To add to the film’s mixed message, a list of famous people who ostensibly suffered from bipolar disorder is shown during the credits. The evidence that these celebrities were bipolar is left to the imagination, since none is offered and most of those listed lived before the idea of mental illness was even on the radar.

While Touched with Fire has its heart in the right place, its sincerity does not translate into a satisfying film. Kirby and Holmes have little chemistry together and much of the dialogue, when it does not consist of psychotic rants, feels awkward and barely registers on the believability scale. While the film strives for authenticity and is reflective of the director’s own personal experience, it is also confusing, poorly written, and pretentious, glaring defects that, for me, stood in the way of any real emotional impact. 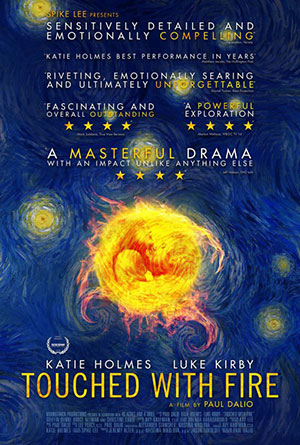