If there was ever a multi-level headline, this new release, Race, from director Stephen Hopkins (“Predator 2,” “The Reaping”) sure has it. In fact, the story of Jesse Owens, a track athlete at Ohio State University who goes on to shock the world (and especially Adolf Hitler) during the 1936 Olympics, is something that has been awaited for a long time.

According to his website, Owens specialized in the sprints and the long jump and was recognized in his lifetime as perhaps the greatest and most famous athlete in track and field history. His achievement of setting three world records and tying another in less than an hour at the 1935 Big Ten track meet in Ann Arbor, Michigan, has been called “the greatest 45 minutes ever in sport” and has never been equaled.

At the 1936 Summer Olympics in Berlin, Owens won international fame with four gold medals: The 100 meters, 200 meters, long jump, and 4 × 100 meter relay. He was the most successful athlete at the games and as such has been credited with single-handedly crushing Hitler’s myth of Aryan supremacy (although the host country won the most medals in the Games, 89 to 56 over the second-place United States, including 33 gold).

In telling the account, Race has several storylines running parallel to each other. The first and obviously most compelling concerns the rise of James Cleveland “Jesse” Owens (Stephan James, “Selma”), who overcomes poverty and racial prejudice to become one of the American representatives to the XI Olympiad and ultimately one of the greatest and most famous athletes in track and field history.

Another involves a disagreement about whether there should be an American boycott of the Olympics because of the situation in Germany at the time, especially the plight of its Jewish citizens. President of the American Olympic Committee (AOC), Avery Brundage (Jeremy Irons, Academy Award winner for “Reversal of Fortune”), opposed this course of action believing politics should remain out of sports. President of the Amateur Athletic Union (AAU), Jeremiah Mahoney (William Hurt, Academy Award winner for “Kiss of the Spider Woman”), thought otherwise, arguing participation would lead to an endorsement of Hitler.

Tacked in is a thread with German filmmaker Leni Riefenstahl (Carice van Houten, “Repo Men”) who — under the watch of a calloused Joseph Goebbels (Barnaby Metschurat, a bunch of German TV series no one stateside has heard of) — attempts to make the propaganda documentary “Olympia,” chronicling the Games in Germany and Owens’ participation.

Like all sports films, we get the usual rags-to-riches montage with Owens leading his college team (led by his coach, played by “Saturday Night Live” alum Jason Sudeikis, “Tumbledown”) to triumph in 1935 and earning a spot on the Olympic squad, despite calls from his own people to boycott the Games. And while the athletic competition scenes are fairly compelling, the behind the scenes moments were most interesting to this scribbler.

The title, Race, is an obvious double entendre, and when casting an eye on the non-track and field meaning it is quick to point out how poorly people of color were treated in America during this period in time (surprisingly similar to Germany, and in some ways worse). In one particularly poignant scene, akin to Hattie McDaniel winning the Best Supporting Actress award for “Gone With the Wind” and having to sit at the back table at the ceremony, Owens, as the celebrated guest of honor at a Manhattan banquet is forced to use the hotel’s kitchen entrance in the rear.

While Sudeikis does well in comic relief (although he does get to test his dramatic chops now and again), James has a much tougher time. Like Chadwick Boseman in “42,” he has to play a man whom we have not only idolized, but iconicized through the years. There isn’t much room here, but he does the best with what he has. And even though Race doesn’t necessarily inspire us or show us anything new, it’s one that the younger people should see — just to get a little historical background of a person who actually existed in a world much different from our own. 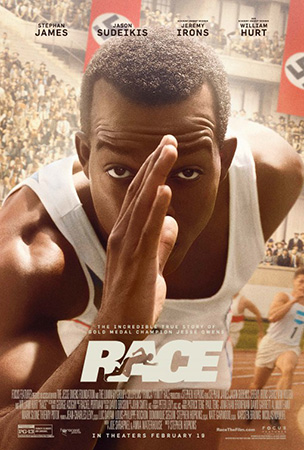