Ok, so this means not to be a partisan review, OK? Yes, it means to broach its subject from a reasonable, logical standpoint. Yes, it in no way wills to oversee the bear gut and occasional sentimentality of the film it sets to look at. Yes, it wants to talk about current issues while taking the film as the vehicle it is. Yet it is aware, and I am just as well, that a logical and reasonable approach does sound a lot like partisanship nowadays — but that has nothing to do with the original intent of wanting to think things through. Hope this you can do with me.

Let me start by praising the film’s timing: 99 Homes is an extraordinarily relevant picture in that it is immensely timely. This is a story of greed and what it takes to be successful in the one arena in which the person who’s today’s incarnation of this doctrine made his fortune first and foremost: Real Estate — the person whose name I shall spare for when it’s three times spelled he wins another point in the polls.

But back to Real Estate: Real $tate. 99 Homes digs into the real meaning of this practice that started as a concept and is now closely associated with a curse for a great fraction of the American people after the housing business bubbled, boomed and blew at everyone’s faces in 2008. What Real $tate $tands for is raw capitalism, trafficking with the impossible, with land and buildings affixed in the ground, which rendered these places as ephemeral as they were expendable, taking back the estate to its original being as a state, something that shall pass as moments pass: Just a state of mind. Having a home is just a state of mind. Having a roof over your head is just a state of mind, the current state of affairs that might change at any time . . . particularly if you didn’t have the means to acquire it in the first place.

Credit, the backbone of capitalism as we know it and of free market as we want to know it, is not based on trust when looked from this angle; a credit is actually an opened opportunity for people to acquire more than they can get on the implicit promise that they’ll be able to pay should their current state of affairs doesn’t dare to change, which, in a volatile market (the current market), is nothing short of a long shot. And it is upon these potential failures that real estate brokers found a goldmine in the housing crisis that by 2009 was producing more homeless people than hurricanes and earthquakes combined: The best possible place for real estate moguls to grow their fortunes and for real estate upstarts to start theirs. I don’t know about you, but real estate mogul sounds a lot like a boogey man to me, like small town goblin or little village ghoul, one of whom appears in this film as the perfect mentor for a young mentee who has just lost his home.

Rick Carver (a hypnotically despicable Michael Shannon, “Man of Steel”) is looking at the dead body of a man who has just blown his brains out as the result of the former evicting the latter from his home. The body is the movie’s first shot, which quickly pans to Carver’s annoyed face, knowing the extra time this will take in his already tight schedule of kicking people off their houses. This is how we meet Dennis Nash (a heartwarmingly disappointing Andrew Garfield, “The Amazing Spider-Man”) who, in court, loses his case in less than 30 seconds and thinks he has 30 days to appeal the judge’s decision, when it turned out he had less than 15 hours to vacate his house. Living with his mom, Lynn (a delightfully righteous Laura Dern, “Wild”), and his son, Connor (a complexly innocent Noah Lomax, “Playing for Keeps”), Dennis has taken the hard responsibilities of his household as a young single father. Recently laid off without payment from his work in construction, he finds himself losing yet another short battle against the absurdity he’s living and kicked off from his home by the cold-blooded e-smoker Carver — with the law on his side (having used a real Sheriff for these sequences provides them with a veracity that makes them at some points almost unwatchable).

After moving to a hotel and unsuccessfully trying to find a gig, Dennis finds himself working for Carver, who takes him under his squama as his new challenge and protégée; where Rick sees promise, he seizes the irresistible inducement of corrupting a constitutionally good person, thus proving to himself that greed is there for everyone who wants to seize it. This is the arc that makes 99 Homes worth watching. Like Gordon Gekko did with Bud Fox, we find Carver slowly carving in Dennis’ psyche the marks that made him realize that, in a free market, it is all about you or them. Watching Dennis’ gradual immersion into the world that first beat him up, going from evictee to evictor, marks a worthy retelling of what “Wall Street” meant in the 1980’s: The real definition of a broker.

The rise of the broker in the 1980’s saw the slow decline of the kingpin. This was the ultimate gangster, the legit $treet-god, the tidied thief clothed as an immaculate impresario. What the remarkable and recent “The Big Short” showed at a larger, almost abstract, scale, 99 Homes illuminates from within, centering on two characters rivaling, competing and despising themselves while learning from each other. One, how to become wealthy while waiving his scruples, and the other how to prove that everyone is a potential asshole should they have the correct role-model. And all these director Ramin Bahrani does bringing formal undertones from Werner Herzog’s dazzling revisiting of Abel Ferrara’s classic of petit abuse of power and corruption “Bad Lieutenant.” Particularly, this can be noted in the use of saturated light by cinematographer Bobby Bukowski (whose work with daylight has always been a sort of watermark). Also, although the movie is set in Orlando, Florida (one of the four States in the US that suffered most acutely from the housing bubble), a substantial amount of the film was shot in New Orleans — a place wherein the sun never lies, only the night does in days of carnival.

99 Homes gets into the entrails of the new broker, the one for whom there is no difference between a house and a home, for whom, as a matter of fact, there is no difference between a house and a big building — a box. The difference between a priceless place and a vacated box is the one a real e$tater cannot afford to make. Vacated when acquired, priceless when is sold, a house represents nothing but potential profit: It doesn’t exist anywhere but in the grand-scale of big business. “Large boxes, small boxes,” tells Carver to Nash at a booze-induced confession time, “what really matters is what you’ve got” — a statement equivalent to “what’s really important is who’ve you fucked”: An economy that’s been built on taking advantage of other people’s mishaps, of other people’s crises.

This is, according to Nobel laureate economist (and Ronald Reagan’s and Margaret Thatcher’s favorite pornographer) Milton Friedman, what made America great (Reagan’s original mandate, remember?): Greed. This is, basically, how our Real $tate mogul promises to make it great again, by bringing greed back on — in full force.

Bahrani’s look at American capitalism (as has been his look at American society from the standpoint of minorities) is both accurate and angry. He looks and evaluates (possibly the latter harming a little the big-picture-take of his project) the way in which a system that transformed greed into a virtue (for, as Friedman says, there is no society that is not originally ran by greed) corrodes the individual to the point of making it the only possible center of a person’s life, since stepping over other people could be considered to be the best quality of a truly ambitious character. When the only reward for hard-work is poverty (as is the case for an astronomic amount of blue-collar Americans), corruption and scam seem like primal survival skills. Such an economy, it’s worth pointing out, is not kept by the people who make, but rather moved by those who know what, when, where and from whom to take.

The greatest asset for the Friedmanite American (if you allow me the neologism) is their overwhelming individuality, which is often reflected in the great lengths to which their personalities grow (or rather bloat). But it is not so much a cult to the personality what these Friedmanites gain; it is, instead, a cult to this person’s achievements, which become their personality — if with achievement we understand net worth. A powerful personality is thus that which mirrors its accomplishments. America’s (US’s greed already marked in its Munronean demonym) favorite myth, the self-made man (yes, majorly a man), the one who overcomes the odds to win over the rest and rise a mogul, a ghoul that comes back and terrorizes losers to take all their possessions with them, is the uncontested model for all respectable blue-collared-Friednamites in love with the free market they all think one day will make them rich.

And this is precisely the divide we should be dreading already, particularly after knowing what it takes for the 99 to keep the 1’s lifestyle: A crash, a crisis, another crash, another crisis over which these number 1’s and 1 percenters will cash and profit. It’s no coincidence that the way in which Carver recognizes his future pupil’s potential is when Dennis is the only one who accepts to literally clean a load of shit for him. And this is where every obscene fortune starts for those infinitesimal number of people who weren’t born into a wealthy family: By cleaning shit for other, wealthy, very wealthy preferably, people. This latter are who actively seek and see opportunities in crises, and who, sometimes, as history doesn’t tire to show us, actively provoke them or, at the very least, allow them when they could’ve done otherwise.

99 Homes is, in this sense, a timely parable and a plucky thriller of what happens to a social and a political system that leans toward the economy as its main ethical barometer. For this is the kind of system that will continue to “bail out the winners,” as Carver asserts, while cashing on the losers, deep sunk inside their own anger. And here is where I cannot avoid but being reasonable and logical: If the world, or the US for that matter, is going to finally and openly accept and elect someone who polarizes the whole humanity into two categories, winners and losers, odds are that you, or someone for whom you care about, will be at the losing end of the stick. Now you go cast your ballot. 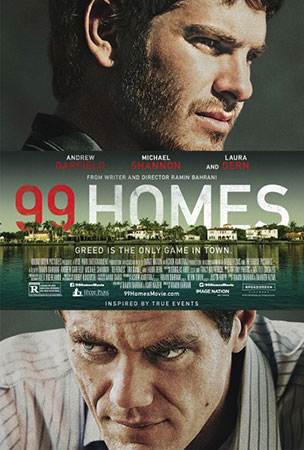