To describe the plot of One Cut of the Dead is to (slightly) spoil it, but it is also to highly recommend it. Without giving away too many details, director Shin’ichirô Ueda delivers a film within a film within a film (plus a bit extra), making it a gloriously meta-meta movie about movie making. If that’s not too many frames for you to engage with, then it’s probably a film for you.

Shot through (pun intended) with a joyous sense of fun and palatable love for the zombie genre, One Cut of the Dead opens with intentionally wretched acting and a stereotypically maniacal director, Higurashi (Takayuki Hamatsu, “Mystic Shrine Maiden”). We see a low budget zombie movie being shot in an explicitly cheap location, before the filming stops and we see the actors and director as characters in a film about the making of the zombie film. Then real zombies interrupt and the film about the film turns into a mad struggle for survival where the previously stiff and unconvincing performers come alive (rather than undead) but the director keeps shooting. Imagine Jack Black as director Carl Denham in Peter Jackson’s “King Kong,” cranked up several notches as Higurashi not only runs around like a mad thing shooting the zombies pursuing his actors, but also takes the time to yell into the camera “Keep shooting!” As if that wasn’t enough, the first 37 minutes of the film are a continuous take, the camera that Higurashi shouts into following the performers up and down flights of stairs, through doorways, out into the woods and into a van, out of the van, down a tunnel, onto a roof. Meanwhile figures, body parts and seemingly random objects fall in and out of frame, the camera moving even at an accelerated pace before falling to the ground and getting picked up, being splattered with blood and then cleaned off, all with a breathless and quite astonishing fluidity.

This level of invention imbues the entire film, as the haphazard creativity of filmmaking jostles with genre knowingness to produce a wildly entertaining ride. In its slower moments, the film takes the time to explore the distinction between entertainment and art, and actually demonstrates the blurring and even erasure of that distinction as events progress. There is smart satire of actors both of the diva variety and the practical jobber, while the television industry also comes under the satirical eye. One particularly delicious sub-plot concerns an arrogant director of photography who receives a sweet form of justice. And just in case that wasn’t enough, One Cut of the Dead also offers a touching family drama between a father, mother and daughter, all struggling with their familial and creative ambitions, spiced with some self-defense lessons (“POM!” is a very funny running joke). Other characters are also engaging, from the zombie nerd Kasahara (Hiroshi Ichihara) to the depressed drunk Hosoda (Manabu Hosoi, “A Bride for Rip Van Winkle”) to the gastro-sensitive Yamago (Shuntarô Yamazaki), all of whom add hilarity as well as pathos to the proceedings.

The viewer of this film has to stay alert, because the audience is regularly thrown in and out of the action. The opening credits feature grainy footage that recalls both TV broadcast and earlier cinema; performances slip between scripted and improvised (or do they?); a peculiar sound effect seems to herald a transition between inner and outer narrative, but the power of suggestion is used on the audience as much as the actors. Images (intentionally?) recall “I Spit On Your Grave,” “28 Days Later” and “The Blair Witch Project,” the zombie genre understanding is abundant and one character’s t-shirts display “Scarface,” “Taxi Driver” and “The Shining.” When leading lady Chinatsu (Yuzuki Akiyama) screams “Stop the camera,” you wonder which level of character has become so distressed.

Not that the viewer will be left wondering very much, because the script is so sharp that multiple early events are subsequently explained. As the film moves between visual registers — continuous take to standard continuity editing — so does it move between forms of narration, playing and replaying events to give the viewer an understanding of what happened, how and why. What seemed a random character movement or an unexplained sound reappears from (literally) a different angle, allowing the (vigilant) viewer’s understanding to steadily increase. Many of these revelations are very funny, but not so much from the wit of jokes as from the film’s brilliant capturing of creative craziness. What seemed to be a weird performance choice is revealed to be born out of necessity; fake tears and actors’ ability/inability to cry on cue come up repeatedly; even a joke about diarrhea is made into something witty rather than just being gross. The creation of a crane shot becomes a complex set piece in its own right, as the film and the film within the film and the film within the film within the film all feature an impressive crane shot. Whether the overall crane shot was created with a similar method to the crane shot that forms part of the drama is maybe the one question to be left pondering.

As a dramatization of guerrilla filmmaking, One Cut of the Dead is sharp, enveloping and hilarious, drawing humor and humanity from the lunacy of film sets where everything you expect to go wrong will as well as a few other things. As a love letter to the zombie genre, it’s knowing and affectionate without slipping into hagiography or self-indulgence. Some viewers may be inspired to try their hand at filmmaking, while others may be put off the practice for life! But even for viewers with no particular interest in any of the reference points, One Cut of the Dead offers a fast, frenetic, funny and ferocious romp to revel in, thrill to and laugh at and with. 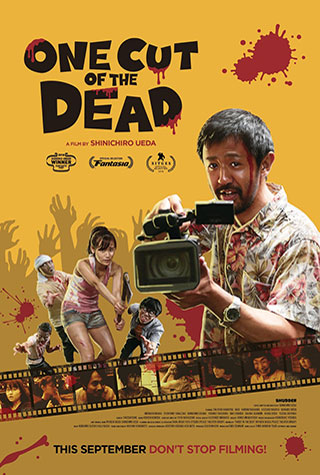