“Living is easy with eyes closed, Misunderstanding all you see. It’s getting hard to be someone but it all works out. It doesn’t matter much to me” – Lennon and McCartney, “Strawberry Fields Forever.”

After fifty years, it is still difficult to assess the full effect The Beatles have had on our culture. Even with the emergence of truth-tellers such as Bob Dylan in the early 60s, the full flowering of independent thinkers and irreverent behavior was not fully realized until The Beatles arrived to help make it a permanent transformation. While the impact of The Beatles was greatest in the U.S. and Britain, the sense of being a part of a new community was felt even in totalitarian regimes where the hippie look and the Beatle-style longhair among teens became a reason for a resurgence of hope even when accompanied by establishment panic.

The subject is explored with confidence in writer/director David Trueba’s (“Soldiers of Salamina”) Living is Easy with Eyes Closed, winner of six Goya Awards, the Spanish equivalent of the Oscars. Inspired by a real incident, the title of the comedy/drama mirrors the first line of the Beatles song “Strawberry Fields Forever” whose lyrics signal attention to the growing use of psychedelics. Set in Spain in 1966 during the last years of the oppressive Franco regime, Antonio, played by veteran actor Javier Cámara (“I’m So Excited”), is a single and somewhat lonely English teacher who is a devoted Beatles fan and uses their lyrics as a teaching tool.

When he hears that the famous Beatle John Lennon is filming Richard Lester’s “How I Won the War” in the south of Spain, he decides to take some time off and drive down to Almeria with the hopes of meeting John and asking him to include his song lyrics in future albums. Along the way, Antonio picks up two young hitchhikers, both on the run from unpleasant situations at home, Belén (Natalia de Molina) a three-month pregnant 20-year-old leaving the nunnery where she was sent by her mother, and Juanjo (Francesc Colomer, “Barcelona Summer Night”), a 16-year-old boy (oddly a Rolling Stones fan) who has run away from his abusive father after an argument over his Beatles-style haircut.

Although there is some initial uneasiness, Antonio’s friendly, talkative nature allows them to relax and feel comfortable. Once in Almeria, the trio bond in a local farmhouse and the more experienced Belén has much to teach her new young friend. Though the film abounds with warmth and humor, especially when Antonio attempts to fulfill his dream of meeting John, there are some dark moments as well. A local bully, who may or may not be a stand-in for the Franco regime, messes up Juanjo’s thick mop of hair and worse, but the bully’s strawberry fields will not last forever.

Beautifully photographed by Daniel Vilar (“The Artist and the Model”) and buoyed by authentic performances from the entire cast, Living is Easy with Eyes Closed touches deep human emotions. Though the coming of age theme is fairly common in world cinema, rarely has it been done with such tenderness and intelligence, and its message of standing up to fear even though you may look foolish in the process is an important one. When Antonio tells his young friends that, “You can’t live in fear. Too many people in Spain live in fear,” it’s a comment with multiple undertones. Living may be easier with your eyes closed, but it is much more satisfying when they are open.

'Movie Review: Living is Easy with Eyes Closed (2013)' has no comments 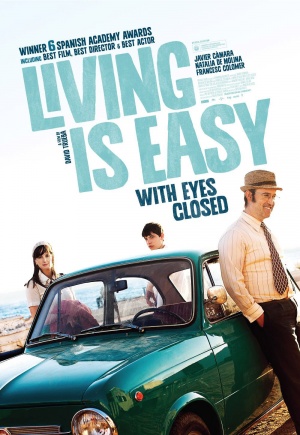