Nostalgia can be a dangerous thing. Often the fondness for our youth can blind objectivity and feel like a betrayal of those simpler times. I cannot speak for my fellow critics, but I myself am fairly young. I was only six years old when the original Digimon series aired in the U.S. and I have fond memories of the franchise being the next big thing. I recall merchandise I used to own, the original theatrical film on VHS, the works. That being said, I understand that Digimon, like a lot of animated series, is a product. That doesn’t make it invalid, but it helps to judge the following output properly. This will not be a fanatical ramble, at least not entirely.

For reasons unknown, Kuwagamon, the first Digimon the characters ever fought in the series, seems to be invading the real world. Whenever it emerges, it lays waste to whatever area of the city it appears, and it seems to be attracted to whatever DigiDestined happens to be nearby. Also for reasons unknown, the “Adventure 02” crew (barring T.K. and Kari) seem to have been defeated and are missing from this outing aside from brief flashes.

That’s as far as I’ll go for plot, as there are plenty of reveals and surprises to ruin if I continue. But as far as plot’s concerned, this is clearly just the first chapter in a much larger story, so I didn’t expect anything grandiose in scale. This first installment was all set-up and novelty — though a great novelty it is — to see the original roster again, and a fair share of the English dubbing voice cast reprise their roles. The acting doesn’t have that same sting of early English dubs, and the direction is impeccable. Joshua Seth (voice of Tai) sounds like he never left, despite the fact that he’s been retired from voice acting for 11 years, and hasn’t voiced Tai for 15.

Animation is crisp and modern, although being a much different art style than usual. However, the few fight scenes there are, things get notably static. Despite Toei Animation (infamous for cheap animation) having very little involvement in the actual production aside from okaying the property, the fights are plagued with off-model keyframes and choppy choreography. For a film production this is sad, as it reminds me of Toei’s previous fumbles with the production of “Dragon Ball Super” just last year. I understand the animation industry, particularly in Japan, is tumultuous to say the least, but that doesn’t make shoddy animation — regardless of a large budget — any more palatable for an audience.

Thankfully, the pull of the film isn’t what few fights there are, it’s the dynamic and interactions between the characters. Assuming you’ve seen “Adventure 01” and “Adventure 02” at least. Otherwise, Digimon Adventure Tri: Reunion is not new viewer friendly in the slightest. I don’t consider this a fault, as it’s clearly an anniversary event meant to springboard off 104 prior episodes. Exposition would’ve bogged down the narrative, as there would be a lot to cover. A project like this isn’t meant to draw new audiences. The interactions between the cast are genuine and earned, even when it dives into love triangle and teen angst territory.

As I said before, the cast is well-directed, both on the reprising end and the replacement choices. The adaptation seems to be very accurate to what was present in the Japanese script, aside from English changes in terminology and names present in the original dub as well as the occasional nod to that dub’s phrases. It’s a compromise on both ends and it’s one I can live with, being a fan of the dub (despite it’s notable Americanization) and growing to appreciate more accurate adaptations of foreign sources these days.

At the end of the day, Digimon Adventure Tri: Reunion is not an amazing film, nor is it a standout within the anime film category, but it is the heartwarming reunion it intends to be while planting the seeds for something far more darker and dire in the future. This is the calm before the storm, and I’m happy to see my old friends again. However, if the next installments are going to be more action-packed, they’ll need to step their game up. 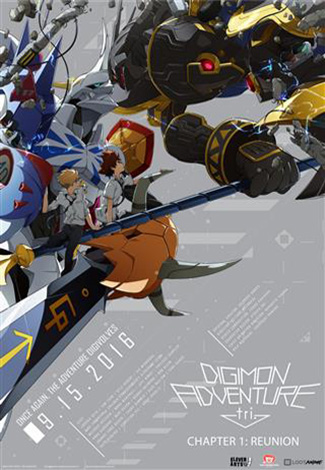