Let’s get niceties out of the way first. The costume design, set design, effects and makeup — that part of Asiel Norton’s post-apocalyptic Orion is fine. It’s all good; probably a small beacon of pleasure to feel impressed by while watching. Everything else? Without any sense of hyperbole, Orion can not only at times present an empty and repugnant waste of film but a borderline unwatchable train-wreck from beginning to end. It is a film of meaningless symbolism, rape, mutilation, infanticide, barbarity, and torture. Seeming as this is the internet, and films can piggyback onto a maligned critical reception to earn some ironic and morbid curiosity, let it be made perfectly clear that Orion contains neither sincere nor ironic enjoyment but only endless frustration from scene to scene.

It begins with a text explaining through a pseudo-mystical prophecy that the world has collapsed into an uncivilized dystopia comparable to the dark ages. However, the dark ages are said to end when The Virgin (Lily Cole, “Snow White and the Huntsman”) gives birth to a child whose blood and corpse will inexplicably blossom a tree. This in turn will send forth The Hunter (David Arquette, “Scream 4”) who shall come for the enslaved virgin to rescue her. However, The Hunter can only earn the right to be with The Virgin by defeating The Virgin’s captor, a savage magician known as Magus (Goran Kostic, “Taken”), who must be willing to sacrifice himself for the betterment and recovery of the human race. Through Magus’s sacrifice, The Hunter can then become Orion, savior of the human race. That is a complete synopsis of Orion and although normally it’s considered unprofessional to recount the entire story in a review, Norton delivers the same synopsis immediately following studio credits and then recounts each section of the prophecy to us with intertitles, scene by scene, before any event has taken place.

It’s curious why he divulges the sequence of events to the viewer before each scene has the opportunity to begin, but the reasoning becomes quickly apparent. While the title cards impress a desire to create mysticism and a sober ambiance, the truth of the matter is that they’re little more than dressing to disguise an incomprehensible series of shots. Cinematography and editing are atrocious. The film unfolds within a dystopic world that blends contemporary architecture, clothing, and tools with a medieval set, narrative storytelling and pseudo-paganistic rituals. Such a short descriptor is all that can be ascertained from the film’s mise-en-scène as most scenes consist almost entirely of close-ups, never allowing the world in which the characters inhabit an opportunity to breath. Other shots include a plethora of lens flairs which make J.J. Abrams infamous use of the technique appear modest in comparison. None of this is helped by the frantic editing and frequent jump cuts that manage to unintentionally overwhelm each scene visually. It quickly becomes a last resort to look away every few seconds to physically endure the film’s nearly two hour running time.

However, the editor, Michael Palmerio, does slow down the editing during particular moments — moments that just coincidentally depict Lily Cole completely naked while standing in a murky forest. The actress clearly shows charisma when allowed to speak dialogue, but she mostly exists as a display or decoration, being possibly molested while giving birth (it’s hard to tell what exactly we’re seeing), dragged along by a chain and little else, or naked in David Arquette’s frequent fantasies. The same silver lining cannot be spared for Arquette who is horribly miscast and truly giving it everything he has to appear virile and stoic. The script offers no help, mostly consisting of succinct, expository lines. It becomes comical how frequent Arquette’s response to various pieces of information is simply, “I will kill him,” often more than once within the same minute.

The writer/director thinks that Orion can appear elusive and heavily coded by stripping away as many details as possible. In an ending reminiscent of “2001: A Space Odyssey,” a vague attempt of a message finally presents itself but merely induces further frustration. Norton clearly has ideas about the world, its tone, its characters, and a moral he wants it to represent. When those ideas are conveyed and a semblance of story can be inferred, then Orion creates intrigue. But intrigue is short lived because those same ideas are hollow and incomplete, stripped of any nuance to flesh out its narrative and appear as something more than bloody murder and rape. Nothing redeeming can be said of a film which itself has nothing to say. To be as straight forward as its dialogue: A complete waste of time. 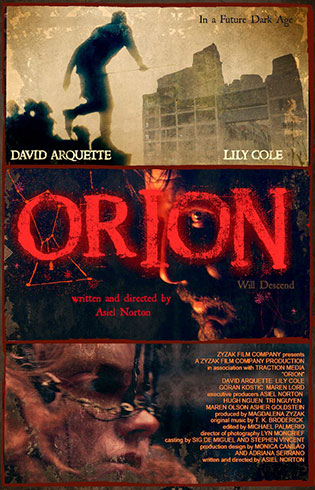