For those not familiar with Christine Choy, she’s a Korean-American filmmaker whose most prolific period of work was during the 80s and 90s, best remembered for the Oscar-nominated documentary, “Who Killed Vincent Chin?” If her name is an obscurity to those outside of New York’s art-house scene, it’s not entirely a problem, as her latest story, Legal Smuggling with Christine Choy, never relies on her celebrity nor familiarity with her filmography in order to be enjoyed. Still, the lack of awareness presents an indefatigable impediment to the overall enjoyment of this anecdotal short, as there’s very little to latch onto in order to produce any meaning or impact as its tale unfolds.

Directed by Lewie Kloster, a student at NYU Tisch School of the Arts where the film’s subject works as a professor, Legal Smuggling with Christine Choy is an animated audio recording of Christine as she recounts her affinity for cigarettes. She explains her disdain for the egregious inflation from 35 cents for her favorite brand, Benson & Hedges, to a $14 price tag in the span of forty years. As such, Choy devises a plan to fly cheaply to Canada in order to use the duty free stores to purchase her smokes, as she saves money overall compared to the prices in New York. However, as she plans on checking through security to head home with her six new boxes of Benson & Hedges, she spots a rule indicating only one box may be brought through. Desperate to not lose her smokes, Choy devises a plan to get past security and avoid being caught.

The short showcases a fun, energetic pace as Choy regales her airport mishaps which makes her misdeeds certainly enjoyable to watch. Kloster employs a unique crafts-styled 2D animation which blends color backgrounds with black and white characters, reminiscent of the show “Angela Anaconda” for those who remember the late-90s Nickelodeon cartoon.

For the most part, its animation is the primary thing to be taken away from the overall production. Short films are a tricky form of filmmaking to create, as brevity can risk the resonance to its own story. And in this case (or carton) it’s difficult to grasp what’s trying to be accomplished by Kloster or Choy in those four minutes. There is no insight into cigarette culture nor is there insight into Choy herself. In the last few seconds, Christine explains that the risk she took is comparable to the risks she believes she must take as a filmmaker, but the connection is tangential at best. Its moral to the story feels tacked on and weightless in meaning.

Like the cotton wool used to convey cigarette smoke, Legal Smuggling with Christine Choy is the epitome of fluff cinema. It is neither good nor bad as a film, undoubtedly amusing for its brief run time, but whether it will be remembered shortly after screening is uncertain at best.

'Movie Review: Legal Smuggling with Christine Choy (2016)' has no comments 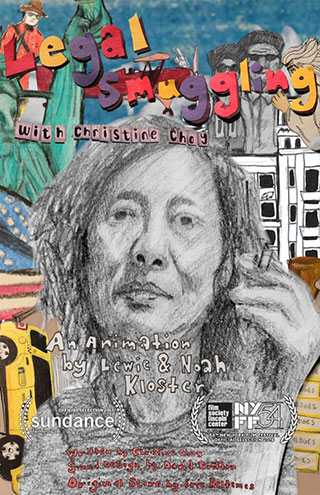