Unless your name is James Nguyen (the man responsible for treasures like “Birdemic 2: The Resurrection”), it’s difficult to laugh at a terrible movie on a shoestring budget. The temptation is to look for the silver linings, the more admirable qualities of what, frankly, looks like a disaster in pixels. Who doesn’t want to be inspired by someone creating a film beyond any budgetary limitations, like a modern Robert Rodriguez? Some of the most creative films are those that found ways to circumvent a minuscule production to present an interesting and exciting story. Not every small-budget film can accomplish this though and when not even the bare essentials can be done right, maybe it’s better off not to begin trying.

That’s the only impression left after viewing Underground Kings.

Essentially following the standard clichés of a typical crime drama, the film begins with a drug bust gone wrong. When an undercover cop is murdered by a Philadelphia kingpin named Smooth (Christopher Mann, “Loving”), his partner Noah Carter (Kevin Savage, “Why I Don’t Date”) vows to takes revenge for the setup. Going undercover himself, Noah attempts to expose the deeply embedded police corruption led by Lieutenant Wilcox (Stephen Berke, “Twists of Fate”) and take down Smooth’s criminal empire once and for all.

At least, that’s what Underground Kings supposedly tells us.

Originally conceived as a web series, its four episode length has been truncated to just slightly over an hour for its home release. The butchery to make this reduced time is far from seamless. Cuts between scenes are jagged and jarring, confusing each shot’s connection and leaving the story and characters incomprehensible to follow. A series has time to flesh out characters and introduce them gradually to mark their significance, but with the brevity of 72 minutes, each introduction is head-spinning. Just as some ounce of sense begins to form, as the film seems to settle down its clunky exposition, smash cut to one year earlier and begin the whole obfuscating process again.

Bad edits occur all the time, becoming the backbone to legends of studios versus directors, artistic vision versus marketability, and the reason why so many director’s cuts exist in this world. Skye Dennis’ creation is not this, however. Underground Kings looks and sounds terrible, showing little worth salvaging if at all. Dialogue is drowned out by the sound of nearby traffic (even the squeaks of Mann’s leather jacket makes a cameo on the microphone) and lighting and focus is entirely at the mercy of the great outdoors. To describe the filmmaking as amateurish is insulting to aspiring filmmakers everywhere looking to catch a break.

There is an obvious thematic connection with this and “The Wire.” However, fans of “The Wire” should avoid this obvious attempt at a quick buck at all costs. Not even Christopher Mann can carry this garbage. 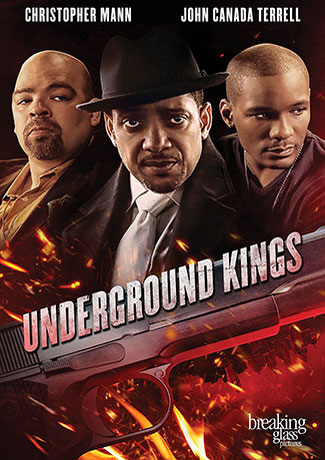