Blacklisted author Millard Lampell’s Cantata “The Lonesome Train” tells us, “Freedom’s a thing that has no ending. It needs to be cared for; it needs defending.” Set in 1958 in Caroline County Virginia, Jeff Nichols’ (“Midnight Special”) Loving depicts one defense of freedom that is not as well known as it should be, the U.S. Supreme Court’s decision in Loving vs. Virginia to overturn Virginia’s miscegenation laws barring interracial marriage, a case that led to a nationwide ban on such laws. The case involved the relationship between 18-year-old Mildred Jeter (Ruth Negga, “Warcraft”), a black woman and Richard Loving (Joel Edgerton, “The Gift”) a 23-year-old Caucasian construction worker. Though the fictional film deals with a racially explosive topic, it is generally low keyed, mainly letting the facial expressions of the taciturn Lovings speak for themselves.

Unable to marry in Virginia, Mildred and Richard drive to Washington, D.C. to marry, but when they return to Virginia, they are arrested by Sheriff Garnett Brooks (Marton Csokas, “The Equalizer”) and his deputies who force their way into the Lovings’ house during the night spouting racial clichés. When Mildred tells the Sheriff that she is his wife and points to their marriage certificate hanging on the wall, Brooks tells her, “That’s not good here.” The two are put into separate jail cells until they are bailed out — Richard one day later, Mildred in three days — but the experience is very disturbing. Appearing before Judge Bazile (David Jensen, “Hot Pursuit”) who is privy to inside information about God’s intention informs them that God did not want the races to mix.

Following their counsel Frank Beazley’s (Bill Camp, “Jason Bourne”) advice, the Lovings plead guilty to a felony in order to avoid jail time, but as a condition, are forced to leave the state for a period of twenty five years. They move in with friends in Washington, D.C., where they live for several years and have three children, but Mildred misses the open spaces where the children can run and play in the grass and a scary incident when one of her sons is hit by a car compels them to move back to Virginia risking imprisonment. Watching Martin Luther King’s “I Have a Dream” speech, however, inspires Mildred to fight an unjust law and writes to then Attorney General Robert Kennedy who forwards her letter to the American Civil Liberties Union (ACLU).

They are contacted by Bernard Cohen (Nick Kroll, “Knight of Cups”), and Phil Hirschkop (Jon Bass, “Jane Wants a Boyfriend”), lawyers for the ACLU. Cohen seems a bit out of his league and does not inspire much confidence in Richard who prefers that they don’t make a federal case out of his situation but Mildred is insistent. The ACLU lawyers file a motion on behalf of the Lovings in the Virginia trial court to vacate the judgment and set aside the sentence on the grounds that the violated statutes violate the Fourteenth Amendment to the Constitution which guarantees equal protection of the laws. When they lose the case as expected, they appeal to the United States Supreme Court but the Lovings choose not to attend.

When asked what he wants to tell the judges, Loving says to tell them that “I love my wife, and it is just unfair that I can’t live with her in Virginia.” It is one of the emotional high points of the film.

Loving is a strong film that sheds light on a little known case that overturned one of the most noxious laws restricting people’s freedom and which led to the recent Supreme Court decision to legalize same sex marriage. In 2010, more than fifteen percent of the marriages occurred between individuals who did not identify themselves as members of the same racial or ethnic group. Edgerton and Negga turn in very convincing performances, but we never have a feeling for what their relationship was really like as all aspects of conflict are avoided. Though Nichols rightfully avoids excessive melodrama or audience manipulation, he may have gone too far in the other direction and its overly restrained nature lessens its impact and affects our intimate connection with the characters. 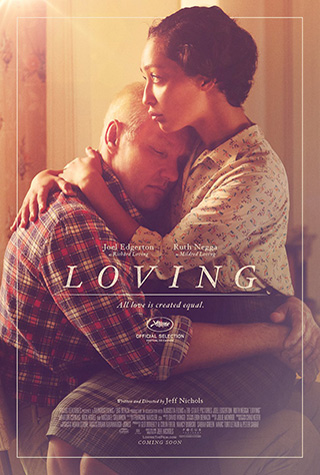