There are three distinct musical features in the Jason Bourne franchise. The most obvious is Moby’s “Extreme Ways,” played over the credits of each film in various versions. There is also the fast, pulsing rhythm of John Powell’s score, a musical heartbeat to the dizzying action on screen. And there is a mournful refrain that has been played since the opening frames of “The Bourne Identity” back in 2002. Despite its release fourteen years later, Jason Bourne opens with this refrain, a subtle welcome back into familiar territory both in terms of character and mood.

In terms of character, we are first introduced to Bourne (Matt Damon, “The Martian”) in a state of melancholy, his visage blank and his actions no more than functional. Whereas other secret agents (former or not) have a higher cause or allegiance, such as James Bond and Ethan Hunt’s patriotic loyalty, Bourne exists only to exist and, as he states to Nicky Parsons (Julia Stiles, “Silver Linings Playbook”), “stay alive.” He is, therefore, a disconnected figure and something of a cipher. This absence can make him and consequently the film as a whole hard to engage with, or it can facilitate the viewer to project their own perspectives into the film in order to take a stance on the ideas and themes presented.

Paul Greengrass’ directorial style also facilitates this perspective. Credited (unfairly or not) as the great purveyor of “shaky cam,” Greengrass and director of photography Barry Ackroyd’s extraordinary mobile camera along with editor Christopher Rouse’s brilliant assembly of images places the viewer squarely alongside Bourne. In the action sequences, this has the effect of placing the viewer at a sometimes uncomfortable proximity to the other elements of the sequence, including other people, vehicles, flying bullets and debris. In these outstanding set pieces, including an intense chase through Athens, a blistering confrontation in London and the relentless finale in Las Vegas, the proximity and excitement rivals those of the previous installments, such as the climactic car chase in Moscow in “The Bourne Supremacy” and the brutal battle between Bourne and Desh (Joey Ansah) in “The Bourne Ultimatum.” Greengrass has developed his technique across previous Bourne installments as well as “United 93,” “Green Zone” and “Captain Phillips,” enabling him to bring both familiarity and innovation to Jason Bourne.

While the action sequences are immersive and deeply affecting (I found myself wincing, ducking and holding my breath at various moments), the blankness of Bourne helps the viewer to consider their own position within and towards the drama. Just as there are three memorable musical elements to the series, narratively Bourne does not exist in isolation. The other principal figures are CIA director Robert Dewey (Tommy Lee Jones, “The Homesman”) and CIA digital security section chief Heather Lee (Alicia Vikander, “Ex Machina”). These characters represent the film’s interest in themes old and new. Dewey is “old school,” ingrained with patriotic notions of national security and willing to sacrifice anything on the altar of the agency. Lee is new blood, deeply entrenched in digital espionage and culture. She is also more idealistic and, according to Dewey, naive, yet her skill, acumen and resolve bely her relative youth (the film as a whole is pleasingly gender neutral). How the viewer responds to these characters is comparable to Bourne’s response: Suspicion, hostility, possible understanding and the potential for trust. As a result, the viewer is always within the events, both on a visceral and an intellectual level.

Although the film delivers on the adrenaline rush of action and suspense, it is less successful narratively. Greengrass and Rouse share scripting duties, and their screenplay lacks the tautness of Tony Gilroy’s scripts for the previous installments. Those films were essentially chase narratives, Bourne discovering further shady dealings while re-constructing his memory, while in “The Bourne Legacy” Aaron Cross (Jeremy Renner) was simply on the run. Here, Bourne remembers his past, but discovers new information that he was never privy to in the first place. Furthermore, much of the motivation is personal, which detracts from rather than adding to the drama. Bourne’s blankness is compelling because this makes him a product of the intelligence machine, and the same is true of his adversaries such as Desh and Paz (Joey Ansah and Edgar Ramírez) in “The Bourne Ultimatum,” Kirill (Karl Urban) in “The Bourne Supremacy,” and the Professor (Clive Owen) in “The Bourne Identity.” The main physical adversary in Jason Bourne, known only as the Asset (Vincent Cassel, “Child 44”), could be a similarly stone-eyed menace, but instead there are personal connections between him and Bourne that are unnecessary and distracting.

The film also fails to knit Bourne’s experiences to the wider story of social media and online privacy. Combining Bourne with contemporary digital concerns is a smart attempt to update the franchise, but is less successful than similar efforts such as “Skyfall” and “Blackhat.” Lee is a fascinating character who does make for an interesting foil both to Bourne and Dewey, and had she served a role closer to that of Pamela Landy (Joan Allen), the film might have felt more integrated. Social media tycoon Aaron Kalloor (Riz Ahmed, “Nightcrawler”) is also peripheral, his storyline more of a distraction than an enhancement.

Therefore, Jason Bourne is uneven and fails to interweave its strands, resulting in some parts being underpowered. Stylistically, however, Greengrass and his collaborators deliver the goods in terms of exhilarating and compelling action, which have the feel of immediacy. This has long been the Bourne series’ great strength — engaging mainstream entertainment with the air of realpolitik and social commentary. Jason Bourne continues this trend with its austerity protests, digital warfare and interpenetration of the public and private sectors. At the intersection of these various concerns stands Bourne himself, a figure without identity, place or role. This is the melancholia of the film and the series as a whole, as expressed by the mournful refrain that opens Jason Bourne. While the action is gripping and exhilarating, it is this sadness that comes with real world engagement that continues to give the Bourne series a distinctive gravity within contemporary franchise production. 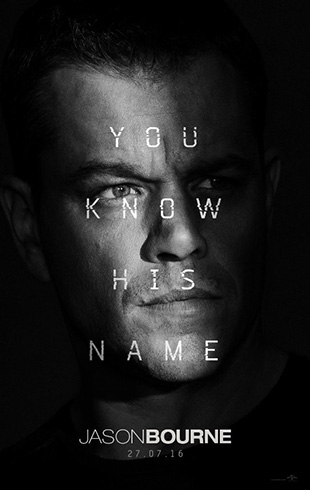