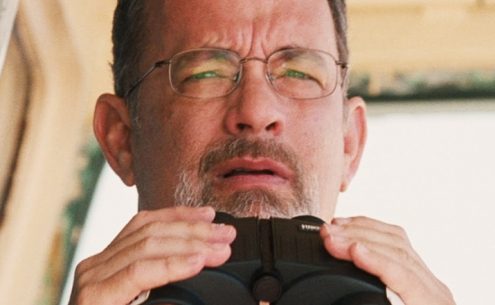 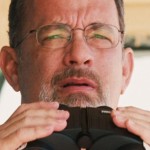 Trouble on the horizon.

Based on true events, Paul Greengrass’ Captain Phillips is the rarest of thrillers, the kind that relies on neither distracting special effects nor circumspect character development. Driven by a powerful, soul-baring performance by the inimitable Tom Hanks, the movie never lags, never oversells the plight of its characters and never reduces anyone or anything to mere caricature.

Hanks is the titular Captain of the United States container ship MV Maersk Alabama, cruising along the coast of Somalia with a full load and heading toward the horn of Africa. Two skiffloads of armed Somalis close in, wanting to board the vessel. They’re pirates, working for a warlord in their impoverished country, and they smell opportunity.

If Captain Phillips were a standard action flick, we might see the heroism of Phillips and his motley crew as they fight the evil pirates off, saving the ship and somehow the world. It’s not so here. There are nuances afoot; for one, we get the perspective of the lead pirate (Barkhad Abdi) without falling into the easy trap of feeling empathy toward him.

He, along with the ragtag pirates board the giant ship, clearly pleased with their find. Muse (Abdi) quickly proves himself to be a strong, humanistic leader; he’s single minded — Where is the crew? Where are the goods? — but not sinister. His gang includes a strong man with a quick temper and Muse’s own relative, who’d begged to come along on the mission — a mission that, if successful, would go a long way to improving their lives.

To tell it, the movie is told in two distinct halves. The time spent by the pirates on the Maersk as they search in vain for treasure and crew is one, and the time spent in the ship’s lifeboat as the pirates with Phillips in hand make their way to Somalia is the other. The villains are conflicted and desperate. And armed. And they’re quickly immersed in an impossible situation as they are firmly on the radar of a U.S. Naval destroyer and the Navy SEALs.

This is one of the toughest, most naked performances of Hanks’ stellar career (“Cast Away” being another). It’s sometimes painful and heart wrenching to watch. He’s an Everyman, per usual, but he’s not also a savior or a hero. He doesn’t suddenly develop super strength and overpower the bad guys. He’s just a guy in charge of a boat and its passengers. And he takes that responsibility very seriously (much to the chagrin of his wife played by Catherine Keener).

Matching him wit for wit while frantically trying to keep his own wits about him is Abdi as the skinny, intelligent Muse, seemingly a veteran of high piracy (though not against huge container ships). Abdi is a wonder to watch; unpredictable and cunning but a little greedy and rapidly running out of viable options. Truly a talent to look out for, Abdi nails this, his first role in any film at all. 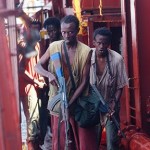 The ending is predictable only in the most general sense. Billy Ray’s screenplay, adapted from the novel “A Captain’s Duty: Somali Pirates, Navy SEALS, and Dangerous Days at Sea” by Stephan Talty and Richard Phillips himself, does not duck some plausible consequences to the actions of each main player and leaves us with a scene that is as emotionally overpowering as anything in Hanks’ previous “Philadelphia.”

Even so, it seems that every time Tom Hanks stars in a good movie, people begin to label it as “Oscar bait,” as if the movie was created just as a vehicle for him to earn an award. That is not a fair assessment of Captain Phillips. Paul Greengrass delivers a tight, emotional, action-packed story fraught with none of the usual missteps of the genre, so if it or Hanks is indeed rewarded with the highest of honors, it will be well deserved. 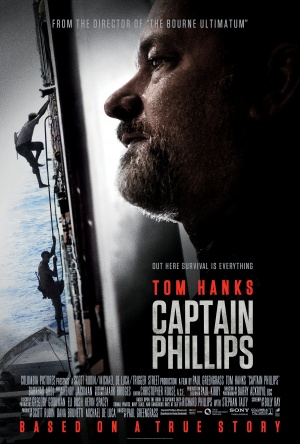