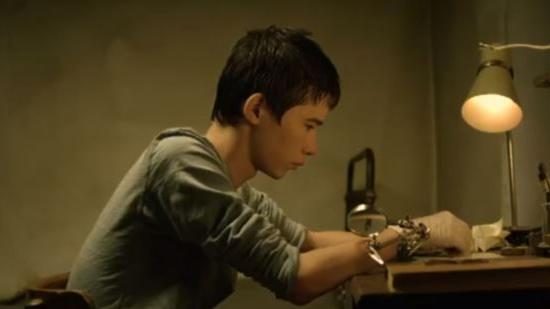 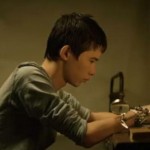 The social and psychological effects of bullying are graphically observed in Emir Baigazin’s remarkable first feature Harmony Lessons. Honored at Tribeca and Seattle, the Kazakh-German co-feature also won a Silver Bear for best artistic contribution at the Berlinale, honoring the cinematography of Aziz Zhambakiyev who brilliantly captures the stark beauty of the desolate Kazakhstan landscape. Set in a remote village, Harmony Lessons is a deeply disturbing and often brutal look at power relationships at a Kazakh high school. Thriving on intimidation, extortion, and violence, the bullying is tolerated by indifferent school administrators and absent parents, its graphic realism making films on bullying such as Gus Van Sant’s “Elephant” look like Mary Poppins.

Aslan (Timur Aidarbekov), a highly intelligent and scientifically-minded 13 year-old boy, lives with his elderly grandmother (Bagila Kobenova) in sparsely furnished surroundings. Aidarbekov, who was discovered by the director in an orphanage, turns in a sharply controlled performance that adds mystery and depth to his character. Reminiscent of the opening scene in Damien Odoul’s “Deep Breath,” Harmony Lessons opens with Aslan robotically butchering a sheep, even after playing games with it, chasing it around the yard as if it were his pet. The absence of compassion is even more prevalent at school, a barren-looking institution that feels as if it could have once been a prisoner of war camp.

The school is run, not by teachers or administrators, but by a hierarchy of bullies, personified by the malicious Bolat (Aslan Anarbayev) who, with his gang of yes men, is the school go-to guy in an extortion racket run by off-campus criminals to support their friends in prison. Bolat is the enforcer in his class, making sure the younger kids pay their share of protection money. If they are late or cannot pay, they receive physical punishment in front of everyone. Although Aslan is not part of the group being extorted, he receives an even worse punishment. Humiliated during a routine medical examination when he falls for a cruel joke, Bolat makes sure everyone keeps him in isolation, refusing to talk to him or sit next to him in class. 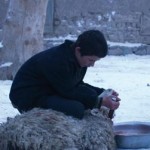 Feeling the effects of his exile, Aslan exhibits some curious behavior of his own. Suddenly becoming obsessed with cleanliness, he changes his clothes daily and takes frequent baths, an activity questioned by his grandmother. Mimicking the behavior of the bullies, he traps cockroaches and feeds them to lizards, even bizarrely creating a miniature electric chair in order to execute an undesirable roach. Even when he makes friends with Mirsain (Mukhtar Andassov), a boy visiting from the city, the dehumanizing cycle does not end. Mirsain makes a valiant, but ultimately unsuccessful effort to challenge the tormentors but his failure only pushes Aslan into even darker territory and inevitably leads to tragedy.

Harmony Lessons is not an easy watch, yet it is a haunting and lyrical film that, even in its bleakest moments, conveys an unmistakable experience of light, often resembling a symbolist painting depicting psychological states of mind. Taking risks in his first film, the 29-year-old Baigazin courageously exposes a society governed by the domination of the weak by the strong. From the brutality of the police to the bullying at school to the way animals and even insects are treated, the film mirrors an increasing cycle of violence in a society governed by the false notion of survival of the fittest. 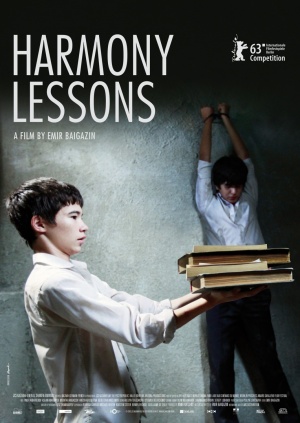