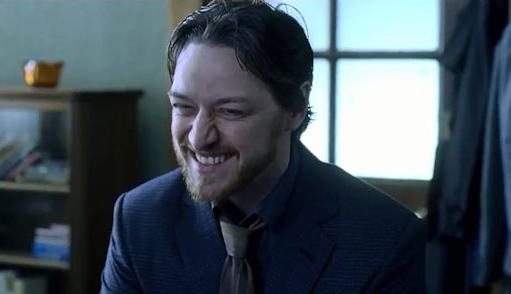 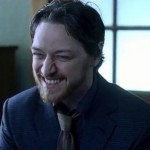 Laughing at his inner voice.

Filth introduces us to the most unlikely of main protagonists, corrupt policeman Bruce Robertson (James McAvoy, “X-Men: First Class”). As the film’s name insinuates, Bruce is filth. Despite being a “man of the law” who’s top priority should be to keep the community safe he has a deep seated hatred for the human race. He’s a walking, talking, swearing, shagging, violent, manipulating, oxymoron. He just needs to keep it together throughout the festive period to secure himself a much deserved (in his eyes) promotion.

This promotion partially hinges on a brutal racially-charged murder for which Bruce is enlisted to solve and largely on his ability to mask his hatred for all his colleagues on the force while keeping favor with his superior, Bob (John Sessions, “The Iron Lady”). A task made all the more difficult when his arch-enemy Amanda Drummond (Imogen Poots, “A Late Quartet”) — who hasn’t actually done anything in the bigoted Bruce’s eyes to deserve her position other than being female — is placed on his investigative team.

In true Welsh style, Filth wallows in the depths of humanity’s darkness. It forces us to face up to the things we don’t want to talk about. However, it’s these things such as Bruce’s unforgiving misanthropy that divulge a lot of the film’s comedic moments and ironically, despite the nature of the film, there are a lot to be had (more so than the novel). As Bruce walks the streets of 1990’s Edinburgh, audiences are treated to a running commentary of his witty, non-complementary observations on the human race. One such comment, “Scotland, we are such a uniquely successful race” is said as Baird cuts to an overweight, miserable looking family standing on the side of the road gorging on takeaway.

The casting is a winner too — Jamie Bell (“Man on a Ledge”) as Robertson’s partner in crime (literally) pulls off a role that really deviates from anything we’ve seen him do before. Eddie Marsan (“The World’s End”) as Bladesey, the husband to the wife of Robertson’s misguided affection, nails his role with his big watery eyes behind NHS glasses and his eagerness to please. But it’s McAvoy who propels Filth forward, giving the performance of his career to date as junkie, master-manipulator Bruce. Impressively, he manages to inject some real charisma into a very complex character only a mother could love. Also, contrary to expectations we discover that Bruce isn’t all bad as this perfectly balanced script (also by Baird) gives Bruce some redeeming qualities (we see him perform the odd good deed when pushed into a corner). 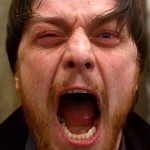 Letting the demons out.

Another credit to Baird’s script is its clever use of plot devise. Strange hallucinations, mostly centering on Bruce’s absent wife Carole (Shauna Macdonald, “Mutant Chronicles”) and Jim Broadbent (“Cloud Atlas”) as his psychiatrist Dr. Rossi (replacement for Welsh’s worm), interrupt the narrative flow. At first they are confusing but the deeper we are sucked into Bruce’s rollercoaster of a mind, the more they begin to make sense.

Yet, despite being a fantastical ride, Filth depicts a very real issue for a lot of people — mental illness and addiction. It may do this through “tongue in cheek” but there is never any doubt as to the severity of Bruce’s condition. And even though it takes a period of adjustment to get used to Bruce’s crude, volatile inner monologue, it’s worth the investment. Having ventured to the brink of madness with Bruce, audiences will leave the cinema emotionally and mentally drained and be better for it. 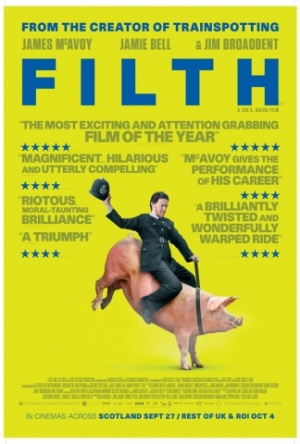