Jaume Collet-Serra’s new action thriller Run All Night stars Liam Neeson as a once notorious hit man named Jimmy Conlon. Jimmy’s nickname was “The Gravedigger,” so you know just what kind of person we’re dealing with here. However, these days Jimmy is just a shadow of his former self, relying heavily on his long standing besties, mob boss Shawn Maguire (Ed Harris, “Snowpiercer”) and whisky. Haunted by the blood on his hands of all the people he’s killed, Jimmy drinks to forget.

Forgetting proves to be a tricky task though, as he has a real life conscience in the shape of a detective (Vincent D’Onofrio, “Escape Plan”) who’s desperate for a confession to the crimes he knows Jimmy’s committed but has no evidence for. Also, the absence of his estranged son Mike (Joel Kinnaman, “RoboCop”) serves as a constant reminder of his past indiscretions. All in all, he’s a lonely man.

But just when you think things can’t get any worse for Jimmy they do on one fateful night when Mike becomes a target of Shawn’s. It’s time for Jimmy to decide where his loyalties lie — with his mob family or his real one.

It won’t require an advanced degree in psychiatry to know which side he’ll take or what he’ll do once his decision has been made, but it could be useful in figuring out the polarity of the film because Run All Night is a film of two halves. In the one, you will find yourself impressed by surprise moments and the involved narrative thread running throughout which poses and tackles the question of “what constitutes a family?” In the other, well, you’ll be recoiling at the predictable plot points riddled with convenience and the multitude of cheesy lines (which Neeson looks like he almost can’t bring himself to utter).

But utter them he does. This is after all another “Neeson vehicle.” How to know for sure?

Unlike past films, such as “Non-Stop” and “Taken” (and its increasingly worse offspring), Run All Night has a bit more grit and determination to it. It’s an action packed ride with genuine thrills, but it simultaneously takes care to examine the many layers of fractured relationships between its characters of which there are many.

And while Liam is the obvious focal with the most fractures, he isn’t the most impressive. That honor gets bestowed upon sub-badass, Andrew Price (Common, “The Odd Life of Timothy Green”), who is also on Jimmy’s case. Andrew is a trained killer, whose movements are so smooth it’s as if he’s the next level up from the liquid metal terminator in “Terminator 2: Judgment Day.” And like said Terminator, he simply will not die — he’s got his eye on his target and nothing will get in the way of that. He’s a sign to the mob that times have changed.

With all this in mind, it’s clear that Collet-Serra has tried to get Run All Night to be taken more seriously than its familiar counterparts. He’s even opted to intercut urban “rap video” style bookmarks of the city in between scenes to avoid the typical formulaic ruts so many action films experience.

Nonetheless, there is no getting around the fact that we have already seen this base film several times before. To the efforts of all involved, however, they’ve done just enough to make it a better and more enjoyable version. 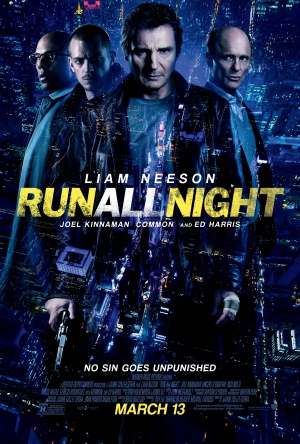