War is hell even under optimal conditions, but when you do not know who your friends are or even who you can and cannot trust, it gets even darker. Just ask Private Gary Hook (Jack O’Connell, “Unbroken”), a raw recruit in the British Army who, contrary to his expectations of being sent to Germany, winds up on the streets of Belfast, Northern Ireland in the time of “The Troubles.” Written by Gary Burke and nominated for nine British Independent Film Awards, first-time feature director Yann Demange’s gritty anti-war thriller, ’71 is a graphic depiction of the early days of the bitter struggle in Northern Ireland between the Protestant Loyalists who want to remain in the U.K., and the Catholic Republicans whose desire is to build a united Ireland, free of British rule.

The film opens with Hook playing football with his younger brother Darren (Harry Verity) outside of a children’s home where apparently he also grew up. An emotional goodbye to Darren puts us on his side, hoping along with his brother that he returns from the war in one piece. Except for a briefing of the soldiers about the physical boundaries of each faction, Demange does not offer any background information on the issues involved in the conflict but deposits us into the middle of the battle, allowing us to be as confused as Private Hook. With the extensive use of a shaky handheld camera, we witness a riot that breaks out on the Catholic streets of Belfast after the British soldiers go door- to-door searching for Republican weapons and the Protestant police force (RUC) inflame the situation with their brutal questioning.

When one of his mates is felled by an IRA bullet, Hook is separated from his regiment under the command of the also inexperienced Lt. Armitage (Sam Reid, “Belle”). On his run through the embattled city dodging Molotov cocktails and burning cars, the disoriented Hook seeks to escape from the pursuit of the younger, more violent Provos, split from the traditional IRA. Haggerty (Martin McCann, “Killing Bono”) and Quinn (Killian Scott, “Calvary”) are out to kill him but he must also protect himself from British undercover Military Reaction Force (MRF) officers Lewis (Paul Anderson, “Sherlock Holmes: A Game of Shadows”) and Browning (Sean Harris, “Prometheus”) who conclude that he might have seen too much. Working with the rebels is teenager Sean (Barry Keoghan, “Stay”) whose naiveté matches that of Hook and who must confront the prospect of having to shoot Gary, a task he is not ready for.

A hardened Protestant boy, exceptionally performed by Corey McKinley, promises to lead him back to his unit, but is caught in the middle of an accidental bomb explosion inside a British pub, though Gary’s life is saved by Catholic civilians Eamon (Richard Dormer, “Good Vibrations”) and his daughter Brigid (Charlie Murphy, “Philomena”). Barely healed, Hook must now elude pursuers IRA members Boyle and Quinn who are engaged in a power struggle within the IRA.

Even though the plotting is complex and sorting out the personalities and their motives is a daunting task, not helped by the barely decipherable accents, ’71 is still a superb achievement, an intense and visceral experience that spares no one in its depiction of the insanity committed in the name of ideology. In the dehumanized world we are privy to where every individual is “a piece of meat,” we can relate to Hook’s sense of lost glory. Alienated from, in poet Wilfred Owen’s phrase “the old lie; Dulce et Decorum est Pro patria mori. (it is sweet and right to die for your country).” Jack O’Connell’s authentic performance of the young soldier makes the tragedy of war all too real. 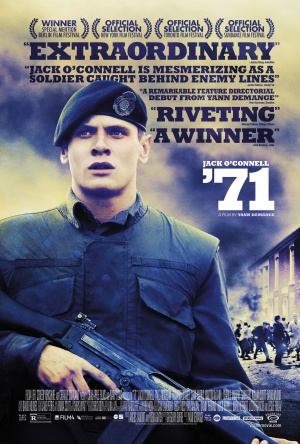