Photography, both still and moving, is given a refreshing challenge in Wei Hu’s cleverly original short Butter Lamp, which concerns itself with a professional photographer’s efforts to take pictures of Tibetan nomads against a wide range of evocative backdrops. The entire movie uses the same camera setup with cuts between each group’s photo session. So we’re essentially watching the various photos come to life, always from the same stationary stance that limits our awareness and narrows the experience to the creation of the photo, giving away little else.

It’s all a charming, creative approach to commenting on the relationship of photography across different mediums, but the aims of Butter Lamp are more ambitious than that. While a 16-minute short generally ensures that ambitions are kept in check, Wei Hu tackles bigger themes on a uniquely condensed scale.

Because the subjects are nomadic peoples unaccustomed to having their picture taken, there’s an intriguing sense of juxtaposition and eye-opening observation at work here. The camera captures culture and history from a single viewpoint, combining reality and fantasy in the shot while expressing their division through the basest breakdown of cinematic space: Foreground and background.

The idea is intriguing, but if this all sounds stiff and serious, well, it’s somewhat surprisingly not. There’s actually great humor here and it’s hardly at the expense of the people. Wei Hu is respectfully in search of the comical intersection between a nomadic existence and a technological one, between representing a people and showing a representation of those people. So comical moments are all over the 16 minute running time, but so are moments that achieve a beauty and poignancy.

One elderly woman, who we are told has never been photographed, shuffles into view and is given a stunning backdrop of a holy palace chosen by the man who escorted her here. He figures it’s perfect for her, since it’s an image of a palace she’s long since wanted to visit, but as soon as the palace backdrop rolls into view, the woman falls to her knees in a prayer stance. The photographer tries to get her attention, but finally the backdrop simply has to be changed, the distraction removed. A new background image erases the palace and the woman’s concentration, suddenly leaving her heavily clothed self on a tropical beach.

There are other strange, funny moments, including a trio of boys who stand on a makeshift podium with props and a backdrop that quirkily and cheaply recreate a medal ceremony at the 2008 Beijing Olympics. And sometimes the backdrop isn’t the source of humor, allowing certain people in front of the camera to provide a fun awkwardness, like one guy in a group who just walks outside the frame, abandoning the shoot when it’s suggested he wear a different jacket.

There’s obviously only so much that can be gleaned from a short like Butter Lamp, but Wei Hu’s memorable manner of pulling back the curtain on Tibetan nomads makes for a consistently engaging and refreshing experience. The look at photography as well as the poetic pinhole examination of a culture not often attended to in cinema makes for a crisply focused portrait, one that illuminates the mysteries of its subject by letting the pictures speak for themselves. 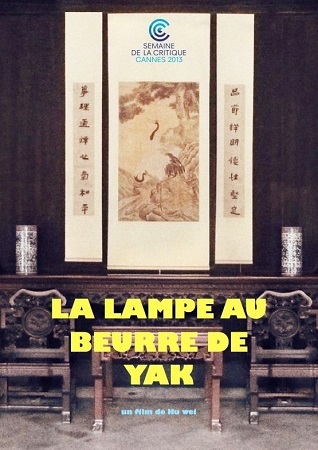