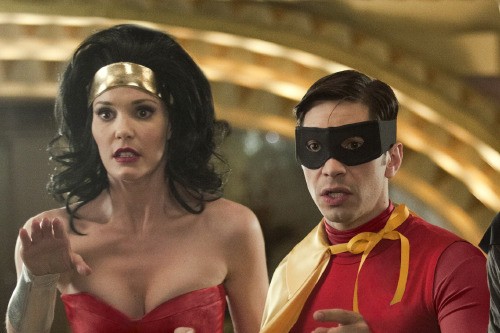 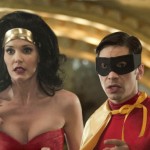 So with so many big names attached, the movie must be awesome . . . right? Well, if you’re expecting this amazing, laugh-out-loud movie then disappointment awaits. No, like the star-studded “Gangster Squad,” Movie 43 is merely serviceable.

What it does do well, however, is find the boundaries of decency and race past them. There are sequences that made me think, “Are they allowed to put that in a movie?” There are other sequences that made me think, “I can’t believe they put that in a movie!” And as much as I would love to say that each and every one of these highly irreverent shorts is really strong, gripping, and funny, they’re not. Just like “The Kentucky Fried Movie,” some of them hit while others miss.

For instance, Johnny Knoxville and Seann William Scott’s short entitled “Happy Birthday” was rather long and got quite boring as it moved on (not even Gerard Butler as an angry leprechaun could save it) . Chris Pratt and Anna Faris’ scatological “The Proposition” stunk (pun intended) and “Victory’s Glory” with Terrence Howard just couldn’t deliver on the “white men can’t jump” joke. On the other hand, Halle Berry and Stephen Merchant’s extreme body modification short entitled “Truth or Dare” had me and my friends rolling, as did Chloe Moretz and Christopher Mintz-Plasse’s “Middleschool Date” which poked fun at menstruation and male idiocy. 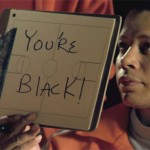 Other skits like “Veronica,” “Homeschooled,” “Super Hero Speed Dating,” and “Machine Kids” are just okay — good for, at most, a chuckle.

The reason for many of the misses, I suspect, is because many of the directors and actors were so far out of their comfort zone. Signing on to a project like Movie 43, was an opportunity to put forth an outrageous performance yet several held back and others looked like they were lost puppies. Some like Hugh Jackman, Halle Berry, Emma Stone, Naomi Watts and Uma Thurman got it and deserve credit for embracing their exceedingly nonsensical roles.

Ultimately, Movie 43 is a mixed bag of nuts. The good shorts, like an almond, are a treat. There aren’t many of them, mind you, but hearty laughs can be had from them. The bad shorts, well they’re like a stale peanut — plentiful and gag inducing. They’re so plentiful in fact, that I don’t recommend paying full price to see, catch it on a matinee or wait for Redbox. 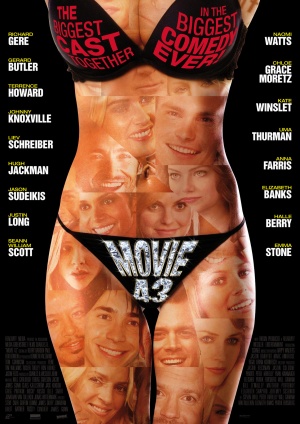