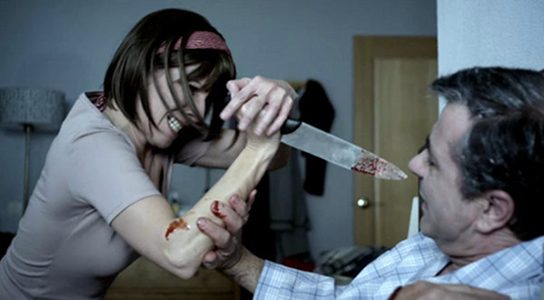 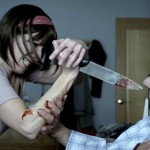 Farts, dogfights, and miscarriages. In part, the perfect additions to a horror flick. Right?

Well, not really. But the 26 directors (and 12 producers, and 14 writers) of The ABCs of Death certainly believed so. Otherwise they wouldn’t have added those and a host of other topics involving bodily functions and strange dreamed up shit to their horror anthology.

Yep, if the name, The ABCs of Death, or the number of directors didn’t clue you in, the movie is comprised of 26 unrelated segments on death, each based off a different letter of the English language (of which there are 26 letters) and shot on a shoestring budget of $5,000. Each also employs a different director and cast. Think of it as “Movie 43, ” only swap the unfunny comedy for unfrightening horror while retaining the same poor execution.

Basically, every short film groups somewhere between “Atrocious” and “Mediocre” — not a single segment of The ABCs of Death showed any level of ingenuity or effort. With so many chiefs, shooting locations and possibilities, it’s understandable — hell it’s expected — that a few rotten eggs will find themselves in the carton, but all of them nearly equally as bad as the other is inexcusable. Gross-out shocks do not equal frights. Gallons of gore cannot cover-up laziness.

From the very first short, “A is for Apocalypse” by Spanish filmmaker, Nacho Vigalondo, the problems are evident and smack the viewer in the face like a wet napkin. In it a wife tries to kill her husband as he lays in his bed. For the several minutes of run time, she stabs at his neck repeatedly, pours grease on his face and beats him mercilessly in the head. What’s incredible about it is that while it is one of the more violent for the sake of violence chapters, it is not the goriest. That honor probably goes to “X is for XXL” by French film director, Xavier Gens. It gruesomely plays off of the great lengths a heavy-set woman will go through to be thin and accepted. 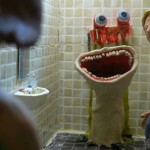 Several of the segments take a stab at dark humor. The standout in this category is “T is for Toilet” by UK director Lee Hardcastle. It gets a laugh on two fronts — it’s an extremely crudely developed Claymation short and it involves a child with a very valid reason for being afraid to use the toilet. The award for the strangest goes to “F is for Fart” by Japanese director, Noboru Iguchi. In it a schoolgirl, who is ridiculously obsessed with farts, puts her face in her teacher’s ass so she can die by the deadly gas. The biggest disappointment goes to Ti West’s “M is for Miscarriage” as it is painfully evident he didn’t even try.

The ABCs of Death is an example of what can happen when too many creative individuals are given free rein to develop whatever the hell they want. A letter of the alphabet is hardly enough guidance to give to expect consistent results with which to piece together a movie (unless being bad is the consistent result everyone was going for). For an infinitely better example of a horror anthology, check out “V/H/S.” 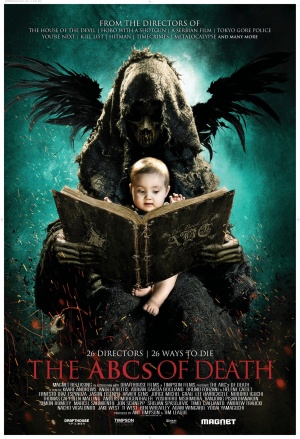