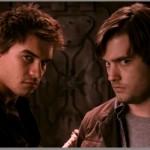 If “Limitless” were mixed with “Dude, Where’s My Car?” and perhaps “Fear and Loathing in Las Vegas” you’d end up somewhere near to John Dies at the End. Directed by Don Coscarelli (best known for cult hits “Phantasm” and “Bubba Ho-Tep”), the trippy feature blurs the lines of reality as it follows around best friends Dave (Chase Williamson) and John (Rob Mayes).

And to make sense of its plot, one would have to drop acid. Repeatedly.

After a deep introspection on the life of a hatchet, John Dies at the End picks up with Dave talking to a reporter (the only known actor in the film, Paul Giamatti) about his experiences at a Chinese restaurant. Looking for a book deal, Dave recounts bizarre stories about alternate dimensions, fantastical paranormal creatures and the new street drug called “Soy Sauce” that enables its taker to experience — for better or worse — it all.

Never quite sure what it wants to be, John Dies at the End reduces itself to first telling varied, non-linear, surreal horror_science-fiction_fantasy_comedy tales (which is no surprise as the film is based on a book made up of a jumble of weird short stories by Jason Pargin) and then to becoming a sloppy, poorly done “Save the World” adventure flick. Apparently taking the sauce may free one’s mind, body and soul, but it also opens them up to possibly being commandeered by evil forces. 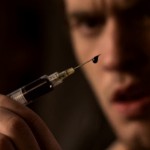 Combining these facets with effects and dialogue that are so bad they’re laughable (a giant meat monster that forms out of a refrigerator is at best a grade school effort), one has to think Coscarelli has hit on the ingredients that will ensure himself another cult hit.

Ah, but the question remains, “Does John die at the end?” Maybe. Or maybe he dies in the middle of John Dies at the End, or the beginning. What is death really? Time? Reality? Coscarelli, doesn’t answer any of these questions — he’s just having a damn good time watching us try to make sense of it. And even though the execution wasn’t the greatest, I can applaud the effort. Or do I? 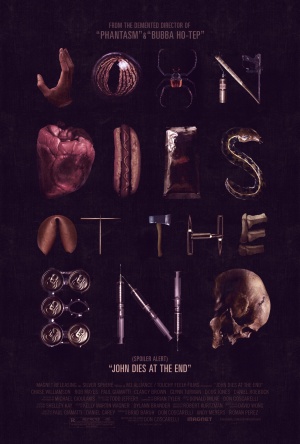